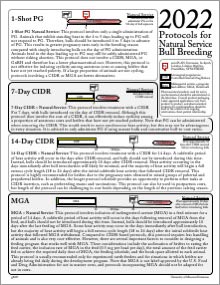 Introduction: While artificial insemination is an excellent choice for an increasing number of producers, it is not the only option after a synchronization program. A variety of simple synchronization protocols can be used effectively with natural service. This can allow producers to capture some of the benefits of estrus synchronization without making the full jump to an AI program. Adding in a synchronization program in bull-bred herds provides many of the benefits seen by producers who are implementing AI, but with less out-of-pocket costs, labor, and time commitment. This is also an excellent tool to progressively shorten an extended-length calving season in order to prepare to use AI in future years.

Goals and Gains: The goal of any estrus synchronization program is to increase the number of females bred early in the season. This results in increased age, uniformity, and value of calves at weaning. Increasing the proportion of the herd pregnant early in the season can also help to shorten the length of the calving season in the cow herd, resulting in reproductive improvements in future breeding seasons.

Bull Considerations: Natural service programs are dependent on bulls for success, and synchronization will result in a larger proportion of females in heat during a shorter window of time. Any bull used for breeding should receive a breeding soundness exam by a veterinarian prior to turnout. As well as evaluating the semen quality and scrotal circumference of the bull, the veterinarian will also assess the bull’s overall condition and physical structure. Individual bulls vary widely in their ability to cover cows. If using synchronization, it is advisable to err on the conservative side with respect to the bull-to-cow ratio used. Most recommendations are to stock mature bulls at a rate of 1 bull to no more than 25 cows. Use of young, inexperienced sires after synchronization is discouraged due to the concentrated breeding window, but bull-to-cow ratios should be reduced if young bulls are used (e.g., 12 cows for a yearling bull and 18 cows for an 18-month-old bull). Single sire breeding pastures also inherently involve more risk. Periodic observation of breeding groups is recommended to ensure mating is taking place and females do not continue to return to estrus throughout the breeding season.

Cow and Heifer Considerations: No technology will replace good management or make up for cows or heifers that are in poor condition. Heifers should be developed to 55-65% of their expected mature body weight prior to breeding. Also consider having heifers evaluated by a veterinarian to ensure adequate pelvic area and reproductive maturity. For best results in a synchronization program, cows should be at least 45 days post-calving and at a body condition of 5 or greater. Consider culling animals that aren’t meeting these criteria; this ensures that the expense and effort of synchronization and bull power will not go to waste.

Selecting a Protocol: Depending on the group of cows or heifers receiving synchronization, protocols vary in their level of potential impact. For example, the 1-Shot PG protocol is simple, but PG is only effective among cows and heifers that are already cycling. Synchronization protocols that utilize progestin products, like MGA or a CIDR, have proven effective at hastening puberty attainment in heifers if some of the heifers in the group are not yet cycling. A CIDR is also as an excellent tool to drive late-calving cows towards resuming estrus more quickly. Note that MGA is FDA-approved only for use in heifers and should therefore not be used in protocols for mature cows. It is important to adhere to the suggested timing of each protocol. Longer term protocols like the 14-Day CIDR and MGA protocols require a waiting period between progestin removal and bull exposure. Heat activity will occur in the period of time after progestin removal; however, exposing animals for breeding on this heat results in subfertility. Instead, plan on waiting approximately 10 days before introducing bulls, and expect the breeding season to start as those heifers begin to come in heat again. Make a calendar and ensure product administration and bull introduction occurs on the correct day. Work with a licensed veterinarian for proper application and use of pharmaceutical products.

1-Shot PG Natural Service: This protocol involves only a single administration of PG. Animals that exhibit standing heat in the 4 to 5 days leading up to PG will not respond to PG. Therefore, bulls should be introduced 4 to 5 days in advance of PG. This results in greater pregnancy rates early in the breeding season compared with simply introducing bulls on the day of PG administration. Animals bred in the days leading up to PG may still be safely administered PG without risking abortion. This protocol does not involve a CIDR, MGA, or GnRH and therefore has a lower pharmaceutical cost. However, this protocol is not effective for inducing cyclicity among anestrous cows or among heifers that have not yet reached puberty. If a large proportion of animals are not cycling, protocols involving a CIDR or MGA are better alternatives.

7-Day CIDR + Natural Service: This protocol involves treatment with a CIDR for 7 days, with bulls introduced on the day of CIDR removal. Although this protocol does involve the cost of a CIDR, it can effectively induce cyclicity among a proportion of anestrous cows and heifers that have not yet reached puberty. Note that PG can be administered when removing the CIDR. This would result in more synchronous heat activity, but this may not be advantageous in every situation. It is advised to only administer PG if using mature bulls and conservative bull-to-cow ratios.

14-Day CIDR + Natural Service: This protocol involves treatment with a CIDR for 14 days. A subfertile period of heat activity will occur in the days after CIDR removal, and bulls should not be introduced during this time. Instead, bulls should be introduced approximately 10 days after CIDR removal. Heat activity occurring in the days immediately after bull introduction will likely be minimal, and the majority of heat activity will begin a full estrous cycle length (18 to 24 days) after the initial subfertile heat activity that followed CIDR removal. This protocol is highly recommended for heifers due to the pregnancy rates obtained in mixed groups of pubertal and prepubertal heifers. In addition, the longer protocol schedule provides an opportunity to perform other tasks at CIDR insertion, such as prebreeding exams and vaccinations. This protocol can also be used in postpartum cows, but length of the protocol can be challenging in cow herds depending on the length of the previous calving season.

MGA + Natural Service: This protocol involves inclusion of melengesterol acetate (MGA) in a feed mixture for a period of 14 days. A subfertile period of heat activity will occur in the days following removal of MGA from the feed, and bulls should not be introduced during this time. Instead, bulls should be introduced approximately 10 days after the last feeding of MGA. Some heat activity may occur in the days immediately after bull introduction, but the majority of heat activity will begin a full estrous cycle length (18 to 24 days) after the initial subfertile heat activity that followed MGA withdrawal. Compared to CIDR-based protocols, this protocol requires less handling of animals and is also very cost-effective. However, there are several important factors to consider in designing a feeding program that works well with MGA. These considerations include the acclimation of heifers to eating the feed carrier, the inclusion rate of MGA in the feed (0.5 mg per head per day), the total amount of the feed carrier fed to achieve the required daily dose of MGA, the feeding schedule, and the bunk space allotted to each animal. This protocol is usually recommended only for experienced cattle feeders and for situations in which heifers are already being fed daily during the development program. Note that MGA is not label-approved by the U.S. Food and Drug Administration for use in mature cows, and protocols incorporating MGA should not be adapted for use in cows.