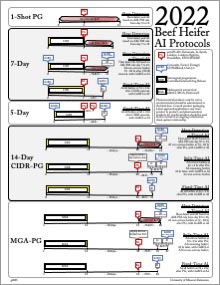 14-Day CIDR-PG: A very effective protocol commonly used across the United States, this protocol involves treatment with a CIDR for 14 days. A subfertile period of heat activity will occur in the days after CIDR removal, but AI should not be performed at this time. Instead, PG is administered 16 days after CIDR removal, followed by heat detection, split-time AI, or fixed-time AI. This protocol is highly recommended for heifers due to the pregnancy rates obtained in mixed groups of pubertal and prepubertal heifers. In addition, the longer protocol schedule provides an opportunity to perform other tasks at CIDR insertion, such as prebreeding exams and vaccinations. Sexed semen can be used effectively with this protocol with heat detection or split-time AI. If using sexed semen, consider using estrus detection aids to identify heifers that are the best candidates to receive sexed semen.

MGA-PG: This protocol involves inclusion of melengesterol acetate (MGA) in a feed mixture for a period of 14 days. A subfertile period of heat activity will occur in the days after removal of MGA from the feed, but AI should not be performed at this time. Instead, PG is administered 19 days after the last feeding of MGA. This protocol works well with heat detection, split-time AI, or fixed-time AI. Compared to CIDR-based protocols, this protocol requires less handling of animals and is also very cost-effective. However, there are several important factors to consider in designing a feeding program that works well with MGA. These considerations include the acclimation of heifers to eating the feed carrier, the inclusion rate of MGA in the feed (0.5 mg per head per day), the total amount of the feed carrier fed to achieve the required daily dose of MGA, the feeding schedule, and the bunk space allotted to each animal. This protocol is usually recommended only for experienced cattle feeders and for situations in which heifers are already being fed daily during the development program. Note that MGA is not label-approved by the U.S. Food and Drug Administration for use in mature cows, and protocols incorporating MGA should not be adapted for use in cows.