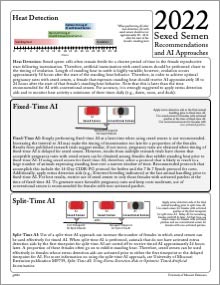 SexedULTRA 4M: SexedULTRA and SexedULTRA 4M are trademarks of Inguran LLC and refer to sexed semen produced using a USDA-developed and patented process now licensed to Sexing Technologies. Stained sperm can be effectively sorted using this flow cytometry-based sorting procedure. Flow cytometry-based sperm sexing has undergone a number of improvements, increasing its efficiency and viability over the last few decades. The sex-sorted semen product using this technology is presently available and marketed commercially for both beef and dairy breeds under the trade name SexedULTRA 4M. The “4M” refers to 4 million sperm cells per unit, an increase from the 2 million cells per unit that was previously standard for sex-sorted semen.

Sexcel Sexed Genetics: Sexcel is a recently developed sexing technology produced by ABS Global (Genus plc) using their proprietary IntelliGen technology. This sexing process also involves staining of sperm cells and differentiation of X and Y chromosome-bearing sperm based on DNA content. To produce a sexed product, however, a laser ablation process is used to selectively destroy sperm cells carrying the undesired chromosome. Sexcel is currently marketed for X-sorted semen for a variety of breeds.

Differences from Conventional Semen: Due to the sexing procedure and subsequent cryopreservation, sexed semen can result in reduced pregnancy rates compared with conventional semen. This reduction appears to be more severe for some bulls than others. Production of sexed semen may simply not be possible for some bulls if their sperm cells are found to not remain viable after sorting, freezing, and thawing. Sexed sperm cells appear to have a shorter fertile lifespan after insemination. To mitigate this, some research suggests that sexed semen requires more precise timing of insemination in relation to ovulation. If AI is performed after heat detection, optimal timing of AI after onset of standing heat is somewhat later if using sexed semen. When timed AI is performed, females that fail to exhibit standing heat prior to AI have particularly decreased pregnancy rates if sexed semen is used. With this understanding, strategies have been developed to optimize pregnancy rates when AI is performed with sexed semen.

Considerations for Using Sexed Semen: In any planned mating of cattle, one sex of calf is usually preferred over the other. Either a bull or heifer calf may be preferred from a given mating, either due to genetic merit for certain traits or simply the needs of the operation for calves of a certain sex. For seedstock operations, using sexed semen allows for targeted production of herd sires or breeding females from specific matings. In the commercial industry, there may be value in using sexed semen to skew the sex ratio of the calf crop toward steer production or to selectively produce heifer calves from specific females or groups. For example, there may be value in producing greater numbers of high-quality replacement heifer candidates or in marketing larger quantities of uniform high-quality feeder steers. However, sexed semen costs more per unit than conventional semen. A higher cost per unit for a lower pregnancy rate translates to a higher cost per pregnancy. This cost is also increased when considering the missed opportunity to obtain greater pregnancy rates early in the breeding season through use of conventional semen. Before deciding to use sexed semen, consider the value difference between the sexes of calves. Weigh whether this value difference is large enough to justify the higher costs and potentially reduced pregnancy rates of using sexed semen.

Heat Detection: Sexed sperm cells often remain fertile for a shorter period of time in the female reproductive tract following insemination. Therefore, artificial insemination with sexed semen should be performed closer to the timing of ovulation. Length of standing heat in cattle is highly variable; however, ovulation occurs approximately 30 hours after the start of the standing heat behavior. Therefore, in order to achieve optimal pregnancy rates with sexed semen, a female that expresses standing heat should receive AI approximately 18 to 24 hours after the start of that female’s standing heat behavior. Note that this is later than the time recommended for AI with conventional semen. For accuracy, it is strongly suggested to apply estrus detection aids and to monitor heat activity a minimum of three times daily (e.g., dawn, noon, and dusk).

Fixed-Time AI: Simply performing fixed-time AI at a later time when using sexed semen is not recommended. Increasing the interval to AI may make the timing of insemination too late for a proportion of the females. Results from published research trials suggest similar, if not worse, pregnancy rates are obtained when timing of fixed-time AI is delayed for sexed semen. However, results from multiple research trials have shown that acceptable pregnancy rates with sexed semen can be obtained among females that exhibit standing heat prior to fixed-time AI. If using sexed semen for fixed-time AI, therefore, select a protocol that is likely to result in a large number of animals expressing standing heat over a narrow window of time. Recommended protocols that accomplish this include the 14-Day CIDR-PG protocol for heifers and the 7 & 7 Synch protocol for cows. Additionally, apply estrus detection aids (e.g., Estrotect breeding indicators) at the last animal handling prior to fixed-time AI. For best results, restrict use of sexed semen to only those females with activated patches at the time of fixed-time AI. To generate more favorable pregnancy rates and keep costs moderate, use of conventional semen is recommended for females with non-activated patches.

Split-Time AI: Use of a split-time AI approach can increase the number of females in which sexed semen can be used effectively for timed AI. When split-time AI is performed, animals that do not have activated estrus detection aids by the first timepoint for split-time AI are sorted off to receive timed AI approximately 24 hours later. A proportion of these females often go on to exhibit standing heat. Therefore, sexed semen can be used effectively in females whose estrus detection aids are activated prior to either the first timepoint or the delayed timepoint for AI. For more information on using the split-time AI approach, see University of Missouri Extension publication MP739, Split-Time AI: Using Estrus Detection Aids to Optimize Timed Artificial Insemination.