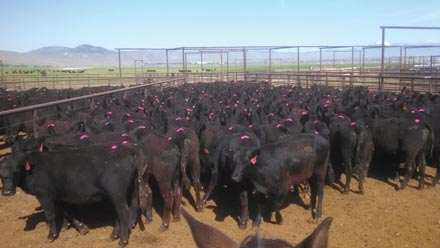 Timed artificial insemination (AI) pregnancy rates can be optimized through use of a split-time AI approach following administration of certain protocols. Using split-time AI, insemination of non-estrous females is delayed until 24 hours after the scheduled time for fixed-time AI. Estrotect estrus detection aids applied at the time of PG administration allow producers to determine the estrous status of females and inseminate at the optimal time.

The development of protocols that effectively facilitate synchronization of estrus and ovulation has enabled producers to increase the use of fixed-time artificial insemination (FTAI) in beef heifers and cows, rather than performing artificial insemination on the basis of detected estrus. In this approach, AI is performed at a predetermined time following prostaglandin F2a (PG) administration. Previous research efforts have evaluated several protocols to determine the appropriate time at which to perform FTAI. For example, following the 14-day CIDR-PG protocol for heifers, the pregnancy rate to FTAI is highest when FTAI is performed 66 hours after PG administration. Acceptable pregnancy rates can be obtained using FTAI following several protocols; however, a proportion of females undergoing estrus synchronization do not express estrus prior to FTAI. To account for these non-estrous animals, all cows and heifers are administered gonadotropin-releasing hormone (GnRH) at FTAI to ensure that ovulation is induced. However, endocrine changes associated with estrus expression are known to positively influence fertility, and pregnancy rates are on average 27% lower among females that fail to express estrus prior to FTAI (Perry and Smith, 2015).

Table 1. Pregnancy rates to AI for heifers after the 14-Day CIDR-PG protocol with fixed-time AI or split-time AI.

Table 2. Pregnancy rates to AI for heifers after the MGA-PG protocol with fixed-time AI or split-time AI. 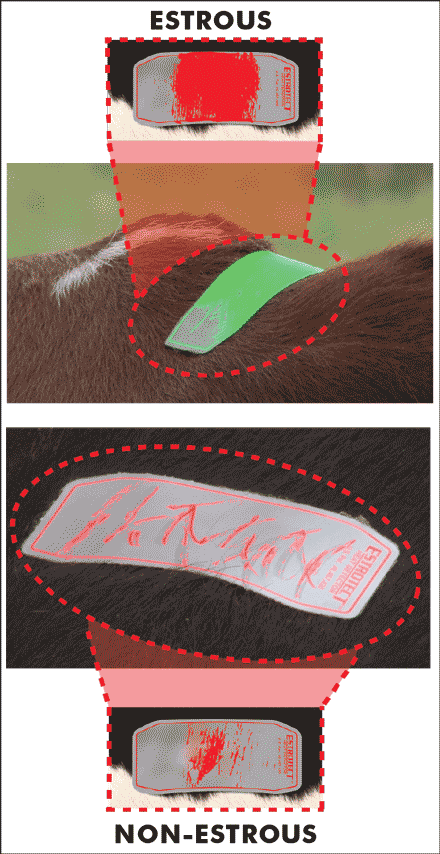 To identify animals that have expressed estrus and those that have not, Estrotect estrus detection aids (Figure 1) can be applied at the final PG administration. Estrotect patches have a scratch-off coating that is removed progressively as an animal stands to be mounted. Because of this design, producers can have confidence about the estrous status of females. If 50% of the scratch-off coating has been removed from the Estrotect patch (Figure 2), estrus onset has occurred.

In addition to offering improved pregnancy rates compared to FTAI, split-time AI allows for a reduction in GnRH use. Administration of GnRH was not found to be required for cows or heifers with activated Estrotect patches at AI (Bishop et al., 2016). Therefore, insemination can be performed without GnRH administration for cows and heifers that have expressed estrus prior to the standard time of appointment breeding, as well as for cows and heifers that expressed estrus prior to the delayed time point. Questions still remain as to the efficacy of GnRH administration in non-estrous heifers (Bishop et al., 2017a); however, it is currently recommended that GnRH be administered to both cows and heifers that have not expressed estrus by the delayed time point.

The 14-Day CIDR-PG protocol, MGA-PG, and 7-Day CO-Synch + CIDR protocols have been extensively evaluated, and timing of estrus expression following these protocols is very consistent. However, the proportion of heifers and cows expressing estrus prior to the time of appointment breeding is somewhat variable, as estrus expression is influenced by the cyclicity rate of the herd and other factors such as weather. The extent to which pregnancy rates are improved using split-time AI compared to fixed-time AI likely varies based on the proportion of cows and heifers expressing estrus prior to 66 hours. Typically, 30-50% of mature cows and 20-40% of heifers fail to express estrus prior to 66 hours after PG following the 7-Day CO-Synch + CIDR and 14-Day CIDR-PG protocols respectively. In field trials conducted by the University of Missouri, pregnancy rates of non-estrous females were improved 16% by delaying insemination 24 hours. Potential improvements in pregnancy rates appear to be dependent on estrus expression occurring during the 24 hour delay period. Large data sets for timing of estrus exprouression in heifers following the 14-Day CIDR-PG protocol suggest a sizable proportion of the synchronized group of heifers express estrus during this delay period (Figure 3).

In results from the University of Missouri, 55% of both heifers and cows that had failed to express estrus by 66 hours after PG went on to express estrus by the time delayed AI was performed. Interestingly, further consideration of these results suggested that pregnancy rates achieved using split-time AI were similar to those achieved when AI was performed based on detected estrus over a 6-day period.

More recently, research efforts at the University of Missouri have evaluated split-time AI in comparison to fixed-time AI among heifers following the 7-Day CO-Synch + CIDR protocol. In contrast to results observed among heifers (Tables 1 and 2) following the 14-Day CIDR-PG or MGA-PG protocols (Figure 4), pregnancy rates to AI were not improved among heifers when split-time AI was performed following the 7-Day CO-Synch + CIDR protocol (Knickmeyer et al., 2019). Since the timing of estrus expression varies from protocol to protocol, it is unknown whether pregnancy rates to split-time AI are improved over FTAI following the administration of other protocols. However, using a split-time AI approach does maximize the proportion of females expressing estrus prior to timed AI. This may be advantageous for multiple logistical reasons, such as when seeking maximize the number of estrous females that receive sex-sorted semen, or if selectively using semen from higher-value sires.

Figure 4. The 14-Day CIDR-PG and MGA-PG protocols for split-time AI of heifers.

Fixed-time AI works. It saves you time, cuts down on labor associated with heat detection, and can result in good pregnancy rates to AI. But can you do even better? A few years ago at the University of Missouri, we developed an approach known as "split-time AI." Using estrus detection aids, you can perform timed AI at a more optimal time for animals that have not expressed estrus before the typical time point for timed AI. Doing so gives a boost to pregnancy rates.

When using split-time AI rather than fixed-time AI, two additional costs are incurred: the cost of the Estrotect estrus detection aids and the additional labor cost of animal handling at the delayed time point. However, cost savings are incurred for GnRH product when using split-time AI, as animals with activated estrus detection aids do not require GnRH administration. Total estrus response when using split-time AI is frequently 85% or greater. Therefore, the cost associated with GnRH administration is likewise reduced by 85% or more. This GnRH cost savings alone typically offsets the Estrotect and labor costs. Most importantly, the increase in pregnancy rates (generally an increase of 5% or more for the synchronized group overall) using split-time AI offers additional value to producers, since markets have shown heifers carrying an AI pregnancy command greater prices than those carrying a natural service pregnancy.

Timed AI pregnancy rates can be optimized through use of a split-time AI approach following certain protocols. Improvements have been observed with some consistency in among heifers following the 14-Day CIDR-PG and MGA-PG protocols. Estrotect estrus detection aids applied at the time PG is administered allow producers to determine the estrous status of females and inseminate at an optimal time. Moreover, split-time AI facilitates a reduction in GnRH usage, as producers can limit GnRH administration to only those females that have not expressed estrus by the time of delayed insemination.