Attracting Purple Martins to Your Property

The purple martin (Progne subis) is North America’s largest swallow and a beautiful songbird. Purple martins are beneficial birds to have near a home or on a property because they eat insects. These birds feed during daylight, and their diet consists mainly of beetles, moths, dragonflies, butterflies, horseflies, leafhoppers and wasps. They will also eat mosquitoes, but mosquitoes make up less than 1 percent of their diet.

Purple martins seem to prefer to nest near human habitats rather than in the rock crevices and tree cavities in which they nest in the wild. In Missouri and throughout the eastern United States, they have become dependent on nesting sites provided by artificial nest boxes. So, if you place and manage nest boxes, or martin houses, appropriately, chances are you will attract purple martins to your property.

Martins migrate from South America and begin arriving in Missouri in late March, although they may be seen in southern parts of the state earlier in the month. The first arrivals are males, glossy blue-back birds with brownish-black wings and tail (Figure 1). Single birds or small flocks may be seen flying around potential nest sites. These early arrivals, often referred to as scouts, usually disappear for a few days, returning with their mates. The first wave of migrants are often paired on arrival. Many of those arriving later may not be paired; and first-year birds, often referred to as subadults, seem to arrive without mates.

Adult birds, the dark-colored males and the duller females that are gray and white underneath (Figure 2), arrive before the first-year birds. The first-year males look like females, except for some bluish-black feathers underneath. These subadults often find that competition for nesting sites with older birds is too severe, in which case, they will nest in newly erected houses, if available. 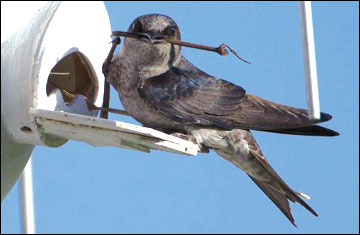 Nest boxes for purple martins may be simple constructions of gourds or boxes with a single nesting compartment, or elaborate multistory houses, or “condos,” with 12 to 36 entrance holes (Figure 3). A commonly used 12-hole aluminum nest box is available from various retail stores. This nest box is attractive and lightweight, does not attract starlings, and can be easily mounted on a telescoping pole, which can be bought with the box (Figure 4). All boxes should be painted white to reflect heat. You will want your boxes to have easy-to-access compartments, as they must be cleaned and maintained at the end of each nesting season.

The size of each compartment, or room, within the box should be 8 inches by 8 inches. Some nest box plans call for a 6-by-6-inch compartment, but these can be reconfigured to create a larger 6-by-12-inch compartment to allow the birds more space for raising broods.

The entrance hole should be 2 to 2-1/2 inches in diameter and about 1-1/2 inches above the floor. Purple martins tend to nest in groups or colonies, so nest boxes should provide at least four separate nesting rooms or gourds.

Many box designs include small porches with guard rails. The porch provides a place for martins to preen themselves. The guard rails help prevent young birds not yet able to fly from falling and are used as perches by older birds. 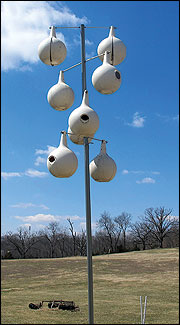 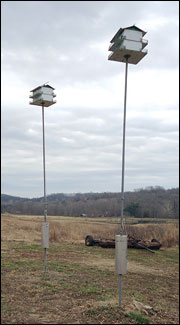 Figure 3
Large natural or plastic gourds can be used as martin houses, as can aluminum houses with larger compartment sizes. A simple stovepipe baffle attached to the pole can protect the box from predators. 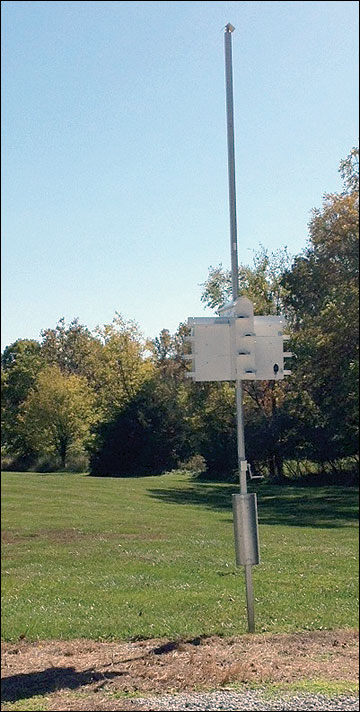 Figure 4
A telescoping pole enables you to lower a martin house for nest checks and winter maintenance.

Purple martins will readily find nesting sites that are in proper locations. Nest boxes should be in place preferably in late March, but no later than April 15.

Erect nest boxes on a pole at a height of 12 to 20 feet. Place boxes in open areas so that birds have access to them from all sides. Locate them at least 30 to 40 feet from any flight obstruction, such as trees and buildings. If possible, place nest boxes near a pond or lake, as martins prefer nest boxes near a body of water (Figure 5).

Be sure to protect nest boxes from competition and predators. English sparrows and European starlings will commonly invade martin nest boxes. To prevent these nuisance birds from taking over, do not erect the houses until you see the martin “scouts” arriving. Many boxes you can buy will have doors on each compartment that can be closed to prevent unwanted birds from using them. Or you can place plastic cups over the box’s entrance holes to keep out nuisance birds. Install a predator guard on the pole to prevent snakes, raccoons, squirrels and other potential predators from gaining access to the nest box. 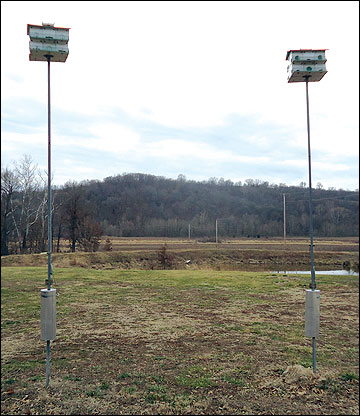 Figure 5
Martins prefer boxes located in open spaces, near water and in sight of human activity.

Check nest boxes weekly. Record the date when eggs are laid so you can estimate when the young will leave the nest, or fledge. Martins generally tolerate nest checks until their young are about 20 days old. You can check nests until then without risk of causing them to fledge too soon.

Maintaining nest boxes is important to ensure their continued use year after year. Boxes should be cleaned, repaired and painted, if necessary, in the fall and stored during the winter to prolong their life and to prevent sparrows and starlings from using them while the martins are gone. Boxes are easier to maintain when they have easily accessible compartments and are mounted on poles that telescope.

Although purple martins arrive early in the spring, adults do not start laying eggs until late April or May. The subadults begin nesting and raising a brood later in the summer, usually in June or July. A pair will produce one brood a year.

Martins carry nesting materials to the compartments for about a month before eggs are laid. They usually bring in dead leaves and small sticks first. Then during the week or two before laying eggs, they bring in mud and sticks to form a relatively solid mat near the entrance hole. This mat tends to slope toward the rear of the compartment and have a small, shallow cup. Often, just before the eggs are laid as well as while the eggs are being incubated, the birds bring pieces of fresh, green leaves to the nest.

The female will lay three to seven white eggs (Figure 6), which are incubated for 12 to 13 days before hatching. Both the male and female bring food for the young. The young fledge when they are 26 to 30 days old. The young will be seen flying near the box for a few days, and one day after mid-August, all the martins will suddenly disappear. Martins gather in loose flocks and migrate south to Brazil and other areas of South America where they spend the winter. 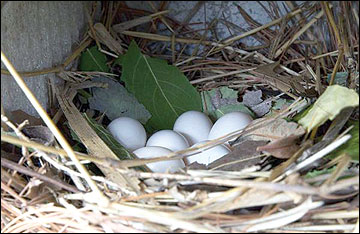 Figure 6
Females will incubate three to seven white eggs in the nest and raise one brood a year.

Purple martins can be attracted to a variety of home, park and farm landscapes through the use of nest boxes that are properly constructed and located in open areas. Here are a few tips to help ensure your success:

More detailed information on the biology of purple martins and a variety of nest box and house plans can be found in the Additional resources section. Contact the Missouri Department of Conservation or your local MU Extension center for more information on enhancing habitats for wildlife on your property.