Attracting Bluebirds to Your Property

Eastern bluebirds (Sialia sialis) are a popular species and recognized as Missouri's state bird (Figure 1). Bluebirds, often referred to as harbingers of spring, are year-round residents in many locations across the state, although populations from northern areas commonly move to southern parts of the state and beyond in winter. Fortunately, these birds can be easily attracted to home and farm landscapes with correctly constructed nesting structures in appropriate locations. 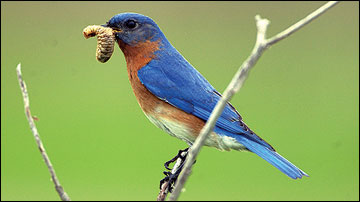 Bluebirds live in rural and urban areas. They prefer mixtures of open grasslands that either contain scattered trees or shrubs or are located near woodlands. Open grassland habitats include pastures, backyards, cemeteries, parks, golf courses and highway rights-of-way. These birds can also be found in orchards and open woodlands or savanna habitats.

Bluebirds eat grasshoppers, all types of flying insects, crickets, spiders, beetles and caterpillars during the spring and summer. When overwintering in Missouri, bluebirds form small flocks and feed primarily on berries and other available fruits. During warm winter days, they will eat any insects that become active.

Bluebird flocks break up early in the year, and individual birds begin arriving at nesting sites in February and March. Their breeding season extends from March to August, with peak breeding activity occurring from early April through May.

Bluebirds are secondary cavity nesters, which means they use preexisting cavities for nesting sites. These cavities may be natural or may have been excavated by other animals such as woodpeckers, primary cavity dwellers that nest in cavities they excavated themselves. Natural cavities result from damage to a tree caused by weather or disease. The decline in naturally existing cavities and the reduction in suitable, available trees has led to a decline in the populations of many cavity-nesting birds, including bluebirds. This lack of suitable nesting sites is why providing artificial nesting sites is so important. Attracting bluebirds to your property can be as easy as building and placing nest boxes in suitable habitats (Figure 2). Chances are the nest boxes will be occupied quickly and used year after year.

After the male has selected a proper nesting site, the female builds the nest, a neat, cup-shaped structure made of fine grass (Figure 3). The female will lay one egg a day for four to six days and then incubate the pale blue eggs for 12 to 14 days. Incubation begins with the last egg laid so that the clutch hatches on the same day and the young develop their wing feathers and leave the nest, or fledge, at the same time. Young birds will remain in the nest for 15 to 18 days before they are able to fledge.

Bluebirds are territorial and will defend an area several hundred feet wide around their nest site. Males typically teach the young birds how to find food for several days after they leave the nest, while the female repairs and remodels the old nest or constructs a new one for a second nesting attempt during May. A second brood will often fledge in June, and in some instances, a third nesting attempt is initiated in July. If this nest is successful, a third brood will fledge in August.

Figure 2
You can attract bluebirds to your property by building nest boxes designed to meet their needs and erecting them in appropriate locations. 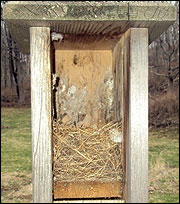 Figure 3
The first photo depicts a bluebird nest with four eggs. The other shows a nest that has been built inside a nest box. Bluebirds will typically lay a clutch of two to seven eggs and raise two broods during the year.

A landowner in Moniteau County, Mo., has been informally collecting data on bluebirds' use of more than 80 nest boxes he has erected on his property since 2007. He has found that in a given nesting season, clutches are fledged from 85 percent of the nest boxes, and 60 percent of the boxes have had two to three nests each producing a clutch of eggs during the season. He has built nest boxes using a variety of designs, including those commonly recommended by the Missouri Department of Conservation and the North American Bluebird Society, as well as the Gilwood nest box. Each has been successful in attracting bluebirds. Of course, setting nest boxes in proper locations is the most important consideration for success, no matter the box design used.

Nest boxes are easy to build, erect and maintain. Numerous nest box plans and designs have proven to be successful.

One style of bluebird box that has proven to be very successful in mid-Missouri is the Gilwood nest box (Figure 4). This nest box has a unique entrance design; the size of the hole can be adjusted from 1-1/4 inch to 1-3/8 inch by simply bending the wire running through the box opening. The hinged front panel allows for easy monitoring and maintenance. The box's equal dimensions of wood simplify its construction. Plans for the Gilwood nest box and other box designs from the North American Bluebird Society and the Missouri Department of Conservation are available for free on websites listed under Additional resources.

Generally, bluebirds will use almost any cavity that has a floor with sides 3 to 6 inches long. The opening should be a maximum of 1-1/2 inch in diameter to exclude starlings. The cavity should be at least 6 or 8 inches deeper than the bottom of the entrance hole to prevent predation by raccoons.

Next boxes can be made with either new or old lumber or exterior-grade 1/2- to 3/4-inch plywood. Don't use wood that has been treated with preservatives such as creosote or pentachlorophenol (penta). 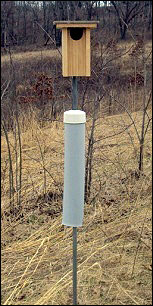 Figure 4
A Gilwood nest box erected on a pole of metal electrical conduit with a PVC pipe baffle as a predator guard.

Location and placement of nest boxes

Because bluebirds actively defend a territory during nesting season, nest boxes should be placed at least 100 yards apart. The pattern in which to place the boxes depends on the arrangement of food and cover and the degree of isolation in any one area.

Place boxes in suitable habitats where a mixture of trees and open grasslands and fields is available. Open fields, pastures, orchards, cemeteries, golf courses, parks, large lawns and gardens are all excellent locations to erect boxes (Figure 5). Boxes can also be placed in areas containing trees, shrubs or fences that border these types of open habitats. These structures provide perching sites the birds use for feeding.

Boxes placed near wooded areas, such as woodland edges and brush piles, may also attract other bird species such as chickadees, titmice, wrens and tree swallows (Figure 6). These species are also native to Missouri and eat large numbers of insects.

Bluebirds will nest in boxes at varying heights off the ground, but a height of 4 to 5 feet is convenient for monitoring purposes.

To discourage predators such as black rat snakes or raccoons from entering nest boxes, mount each box on a post fitted with a 24- to 36-inch-long baffle made of metal stove pipe or sun-resistant PVC pipe. 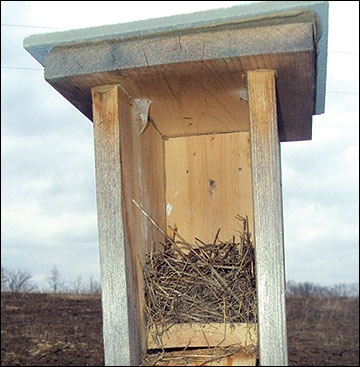 Figure 6
Bluebird boxes may also be used by other species, such as tree swallows, which typically build nests with twigs and small sticks.

Monitoring the success of nest boxes can be a fun activity throughout the spring and summer. Frequent inspection during nesting season may prevent starlings or house sparrows from using the box.

Although checking a box is not necessary, bluebirds do not seem to be frightened if you look into the nest to check on their eggs or young. Before opening a box, gently tap on the top to allow the female to leave. She will return after a short time. You can open boxes to check on the young for about 12 days after they have hatched. Then you need to leave the boxes undisturbed. The young will be leaving soon after the 12th day but may be frightened into leaving too soon, which could result in their death due to starvation or predation.

If you are interested in keeping track of nest box use, this is the basic information you might want to record:

If you want to keep more detailed records, you can also record this information:

To prepare for the next nesting season, inspect, clean and, if needed, repair nest boxes by the end of February each year (Figure 7). 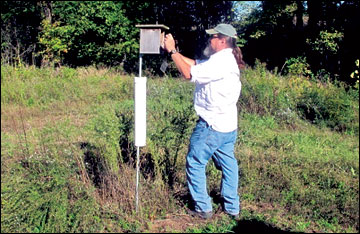 Figure 7
Monitor nest boxes for use during nesting season, and inspect, clean and repair them in the fall or winter for use the next nesting season.

House sparrows
Boxes placed near homes or buildings may have a greater chance of competition from house sparrows. House sparrows are more aggressive than bluebirds, so you will need to discourage them from using nest boxes when possible.

House sparrow nests are easily recognized. They are messy structures made of grasses, feathers and assorted debris and litter. Eggs are white and speckled brown. This species is not protected by state or federal regulations and can be discouraged by removing their nests and eggs as soon as you see them.

If house sparrows continue to be a problem, relocate nest boxes at least a quarter mile from any building.

Bluebirds are attracted to open areas with a mixture of trees and shrubs that offer areas for nesting and for foraging for insects and other foods. Bluebirds forage on insects during the spring and summer and eat substantial amounts of fruits and berries during the winter (Figure 8). Habitats can often be improved for bluebirds, and other songbirds, by planting a variety of trees and shrubs. Shrubs such as dogwood, sumac, serviceberry, viburnum and blackberry and trees such as oak, pine, black cherry and hackberry are beneficial for bluebirds. 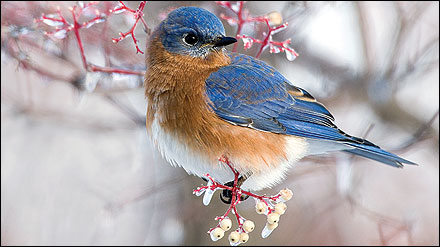 Figure 8
When overwintering in Missouri, bluebirds survive on fruits and berries.

Attracting bluebirds to your property can be a rewarding experience. Building and erecting nest boxes for bluebirds addresses an important need: suitable cavities for nesting.

Building nest boxes is a hands-on activity that can also be a valuable educational and community service project for both adult and youth organizations, such as Missouri Master Naturalists, Missouri Master Gardeners, 4-H clubs, Boy Scouts and Girl Scouts (Figure 9).

In addition to building boxes, consider designing and establishing a bluebird nest box trail. A bluebird trail consists of a multiple nest boxes spaced at least 100 yards apart in suitable habitat and in locations where they can be easily monitored. A trail can be tailored to fit a group or individual's objectives. It can be organized as a communitywide activity that involves multiple organizations and designed to be an educational activity that benefits the community.

Contact the Missouri Department of Conservation or your local MU Extension center for additional information on bluebirds, enhancing bluebird habitats, and building and erecting nest boxes for bluebirds and other songbirds. 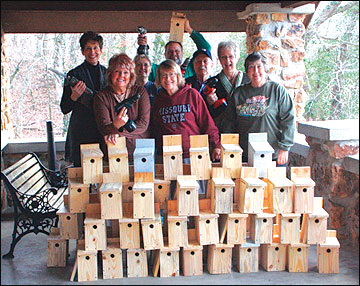 Figure 9
Building bluebird nest boxes and developing bluebird trails can be an excellent community project for adult and youth organizations.