Editor's note
This publication has been updated with the 2021 survey results. For the survey questions, download the 2021 Missouri Agriculture Rental Rate Survey (PDF). 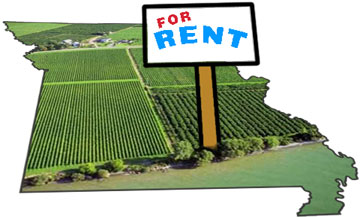 One hundred and twelve Missourians responded to an online survey with sufficient information on 192 rented fields. Sixty-two percent of the responses were from landowners while 38% were from tenants. About 40% of respondents to the survey indicated they had leased the land they reported on for 5 or less years. The longest uninterrupted lease reported was 36 years. Our analysis of their responses are reported in this guide. They were asked to provide information on cash rental rates for Missouri cropland, pastureland, grain bins and fee hunting.

This guide should be used as one piece of information among many factors that affect rental rate negotiations and should not be the sole basis for determining your rent. Factors affecting rental rates include the acres available for rent in a locale, the number of farmers seeking to rent land for cash, productivity of the land, size of the parcel, production costs and market prices.

Table 1 presents a summary of the crop and pasture rental rate survey responses. The survey asked respondents to report the cash rental paid or received in 2020 and 2021, the crops grown in 2021, and the expected yields of that farm. Most farmers reported that they grew both corn and soybeans on the same farm in the same year. For this reason, the rental rates are reported as “Row-crop” ground and includes those who grew corn and soybeans. The rental rate for row-crop ground in Missouri averaged $147.42 per acre. Farmers reported an average cash rental rate on wheat fields of $113.91/acre; $33.51 lower per acre than row-crop land.

Other crops reported on some survey responses included cotton and hay. Not enough responses for these crops were obtained to provide good estimates.

Table 2 reports the results of previous Missouri cash rent surveys. Earlier surveys asked questions specifically for corn ground and soybean ground. This year the two were recognized as growing on the same ground and have been reported as row-crop ground on the last two survey taken by MU Extension. Row-crop ground growing corn and soybeans has been very flat in the mid $140’s since 2014. The rental rate for farms that had some ground planted to wheat went down slightly since our last survey in 2018. Rental rate for irrigated corn went down slightly while rental rates for irrigated rice rose.

Table 3 presents the summary of lease rates by acre. The large range in rental rates indicates several factors not included in our survey must be affecting the value of hunting rights. Leases for ducks and geese usually allowed 5 or more hunters on the property. Other hunting leases would often specify 5 or fewer hunters permitted on the property.

This is the third time the hunting leases rates were requested from Missouri landowners and farmers. Hunting leases are very site specific. This makes summarizing hunting lease rental rates difficult. Most hunting lease responses indicated that the rent was based on time (per year or per season), the number of hunters allowed and the number of acres where hunting can occur. For a more detailed description of hunting leases see MU Extension publication, G9420, Landowners’ Guide to Lease Hunting in Missouri.

The quantity and quality of the wildlife accessible on a piece of land are important determinants to the fair value of a hunting lease. However, those are not measured in a lease survey. The number of acres in the lease will impact rental rates for the lease categories of “any wildlife,” “deer and turkey” and “deer only.” The number of hunters allowed on the land also will affect hunting lease rates.

Our survey also asked for rental rates of buildings and structures. Eighteen grain bin responses indicated an average of $0.17/bushel/year rent with a range from $0.09 to $0.25. This year only one respondent indicated that they charged grain bin rental on a monthly basis. The rest indicated that rent of the grain bin was annual.

We received insufficient responses on livestock facilities and machine shed to estimate a common rental rate.

Typically, the tenant pays all costs associated with raising crops and livestock on leased land. Landowners normally pay for improvements expected to endure beyond the period of the lease and all expenses related to property ownership.

Half the survey respondents indicated that they renegotiated their lease every three to five years. The next most common arrangement was to renegotiate the lease annually — one third reported this.

A written lease that describes the terms of the agreement is recommended. Example lease forms for cash rent of cropland and pasture can be found at Ag Lease 101. It is common for a cash lease to contain restrictions on use, such as crops grown, required fertility, and maintenance of roadways or fence. Pasture or livestock leases may specify a maximum stocking rate. Storage facilities may specify the type of crop to be stored and payment of utilities. All cash leases should specify the amount of rent due, the time and method of payment and the duration of the lease. AgLease101 contains extensive information on what to consider when leasing land, animals, equipment and buildings.

+ Is relatively free to make management decisions.
+ Receives all profit resulting from higher yields or higher commodity prices.
+ May enroll in government programs and receive the entire payment.
– Has increased risk, because rent is fixed regardless of production.
– Can have large capital requirements for production expenses.
– Can have rent raised for doing a good job as the landowner sees profit being obtained with his or her property.

+ Is assured of a specific level of income.
+ Is not required to commit cash in the production process.
+ Has no worries about storing or marketing crops.
– Does not receive as much money as in a crop share arrangement during good years.
– May worry that the tenant will not maintain the property.
– Has little chance to do income tax management.

For information on other types of rental arrangements and lease forms, contact your regional agricultural business management specialist. Additional information and forms are also available at Ag Lease 101, a website created by the North Central Farm Management Extension Committee.