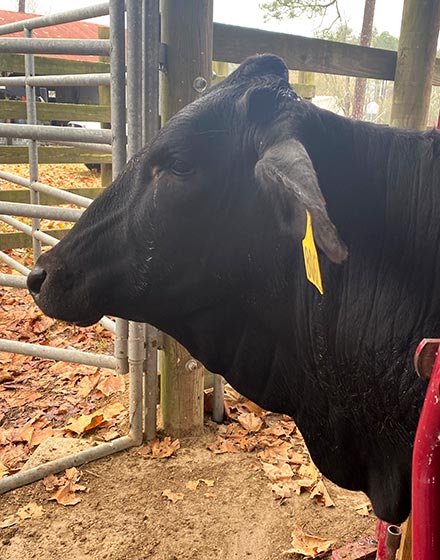 Figure 1. A Bos indicus-influenced female with characteristically long ears and a large dewlap.

Bos indicus cattle, sometimes referred to as zebu, were domesticated in the Indus valley region of modern-day Pakistan approximately 7,000 years ago. Domestication of Bos indicus cattle was a separate event from domestication of Bos taurus cattle, which is thought to have occurred approximately 10,500 years ago around the Taurus mountains and upper Euphrates River region of the Fertile Crescent, near modern-day Turkey. Due in part to the distinct domestication events, indicine and taurine cattle are referred to as two separate subspecies: Bos taurus taurus and Bos taurus indicus.

Due to the location in which they were domesticated, Bos indicus cattle (Figure 1) are well-adapted to tropical and subtropical conditions, exhibiting a high tolerance to parasites, solar exposure, high ambient temperature and relative humidity, and even low-quality forage diets . Well over half of the world’s cattle inventory is managed in subtropical or tropical environments where Bos indicus breed composition is advantageous. Moreover, a large proportion of the beef industry in the United States lies in areas of high thermal stress, such as the humid Gulf Coast and the Mid-South.

A role for Bos indicus in the Mid-South?

Concerns over increasingly warm climatic conditions continue to drive interest in Bos indicus-influenced composites. Even in the Mid-South, improving heat tolerance in cattle populations is often of interest due to the apparent worsening of heat stress among cattle grazing endophyte-infected tall fescue. Similar adverse effects of toxic fescue are observed among both Bos indicus cattle and Bos taurus cattle, suggesting Bos indicus cattle do not have innate mechanistic resistance to the vasoconstrictive effects of the endophyte-produced alkaloids. Nevertheless, the general heat tolerance conferred by Bos indicus genetics may be advantageous considering the subclinical heat stressed associated with fescue-based grazing systems.

When managing Bos indicus females, it is important to acknowledge that they differ meaningfully from Bos taurus in several aspects of reproductive physiology. Low rates of ovulatory response are observed among Bos indicus females administered GnRH at a random stage of the estrous cycle. Thus, it is often suggested that the time window of responsiveness to GnRH is narrower among Bos indicus-influenced females compared to Bos taurus. Decreased ovulatory response to exogenous GnRH may also be influenced by differences in the magnitude of the LH surge released by Bos indicus females. Bos indicus females release less LH in response to exogenous GnRH, with some indication that the magnitude of the LH surge released in crossbred females is inversely proportional to the percentage of Bos indicus influence in the female’s breed composition. Prior studies have indicated that GnRH response in synchronization protocol is significantly lower in cows having high circulating progesterone concentrations compared to cows with low, and Bos indicus appear to be more sensitive to these effects of progesterone than are Bos taurus. Today, it is widely accepted that the protocols regarded as industry standard in Bos taurus cows simply yield poor results in Bos indicus-influenced cows.

Bos indicus-influenced cattle are more susceptible to stressors and often experience higher excitability during handlings when compared to Bos taurus cattle. Consequently, this leads to an increased amount of cortisol in the blood. The increased concentration of cortisol can have a suppressive effect on luteinizing hormone (LH) by decreasing the responsiveness of the anterior pituitary to GnRH. The adverse effects of stress during handlings may decrease the success rates of reproductive technologies among Bos indicus-influenced cattle. Due to the negative impacts of stress on reproductive success and overall productivity, consider culling Bos indicus females with poor temperament. Temperament is reported to be moderately to highly heritable, suggesting much progress can be made through selection and culling decisions. For more information, see MU Extension publication G2047, Managing the Effects of Stress and Temperament on Beef Cattle Reproduction (https://extension.missouri.edu/publications/g2047).

While some effective protocols have been developed for synchronization of estrus among Bos indicus cattle, the majority of the research in this area has come out of South America, Australia, and other areas outside of the United States. In these countries, protocols often rely heavily on use of estradiol products, such as estradiol benzoate and estradiol cypionate. Currently, estradiol products have not been approved by the U.S. Food and Drug Administration’s Center for Veterinary Medicine for use in estrus synchronization. In fact, FDA regards use of estradiol in food producing animals as illegal and has repeatedly warned veterinarians and pharmacies against compounding estradiol products for reproductive purposes.

Currently, only one protocol for Bos indicus-influenced cows is widely publicized: the Bos indicus PG 5-day CIDR or “Bee Synch II” protocol (Figure 2). This protocol is simply an adapted version of the 5-d CO-Synch + CIDR protocol used in Bos taurus cows, with two modifications: (1) PG is administered at the start of the protocol to induce luteolysis among the majority of cyclic cows and thereby reduce circulating progesterone concentrations during treatment, and (2) GnRH is not administered at the start of the protocol for control of follicular development, based on findings of poor ovulatory response to GnRH.

Bos indicus-influenced heifers reach puberty at later ages than Bos taurus. However, nutritional management and selection pressure for early attainment of puberty allows for commercial systems in which Bos indicus heifers are managed to calve at two years of age.

Use of progestins in estrus synchronization protocols (Figure 3) can effectively induce puberty among a large proportion of peripubertal Bos indicus-influenced heifers. Extensive evaluations of melengestrol acetate (MGA) and controlled internal drug release (CIDR) protocols in Bos indicus-influenced heifers suggest an opportunity for effective use of these approaches, with results similar to field results obtained among Bos taurus heifers when accounting for pubertal status. 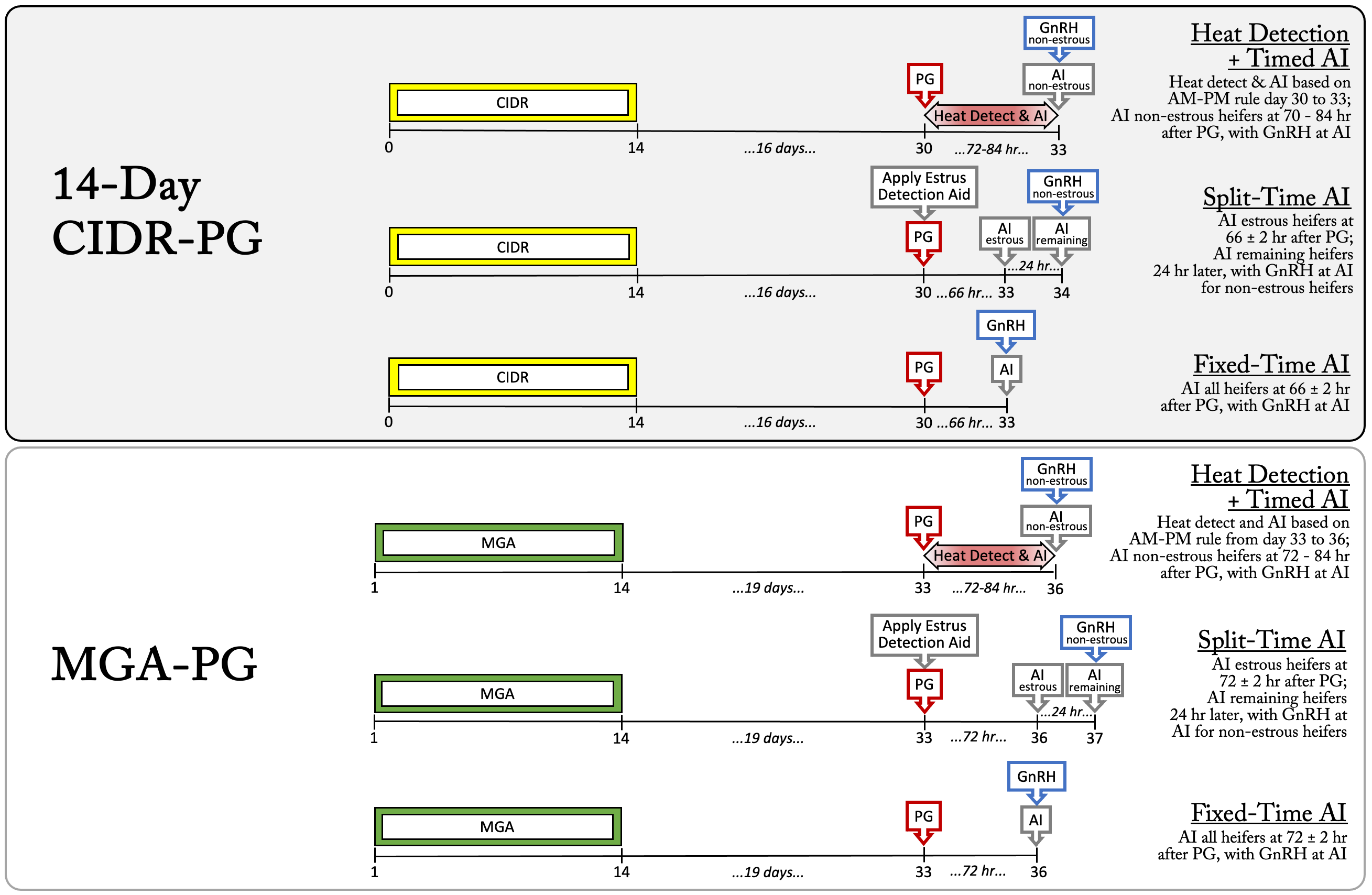 Figure 3. The 14-Day CIDR-PG protocol and the MGA-PG protocol are commonly used long-term progestin protocols for synchronization of estrus among heifers across the United States. Extensive evaluations of these protocols in Bos indicus-influenced heifers suggest an opportunity for effective use of these approaches, with results similar to field results obtained among Bos taurus heifers when accounting for pubertal status. For more information on, see MU Extension publication G2025, Estrus Synchronization Recommendations for Artificial Insemination of Beef Heifers (https://extension.missouri.edu/publications/g2025).

Although Bos indicus-influenced cattle differ from Bos taurus cattle, commercial expectations for the breeding program should not be lowered. Consider using a short breeding season or marketing later-conceiving heifers. This ensures selection pressure for early-maturing Bos indicus heifers and improves the likelihood of those animals breeding back early in subsequent seasons. In addition, use of a short breeding season and/or culling of later-conceiving cows is highly recommended. Maintaining later-conceiving cows extends the length of the calving season, results in fewer pounds of calf weaned, and results in poorer reproductive performance in the next year’s breeding season. For more information, see MU Extension publication G2029, Calving Season Considerations for Commercial Beef Cattle Operations (https://extension.missouri.edu/publications/g2029).