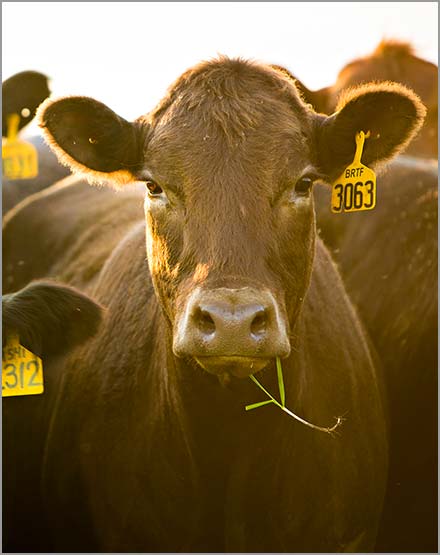 Throughout their lifetime, cows in the breeding herd may increase in value (appreciate) or decrease in value (depreciate) as a function of age, stage of production, and/or market conditions. Decreases in cow value should be thought of as an annual cost for accounting and management purposes. However, because cow depreciation is a non-cash expense, it is often overlooked as a real cost of cow-calf production. Unfortunately, cow depreciation is often one of the largest annual expenses in a cow-calf budget, generally ranking as the second largest cost category after feed costs. Understanding and limiting costs associated with cow depreciation should therefore be a major priority of cow-calf producers.

Actual depreciation is calculated by taking the purchase price of an asset minus its salvage value at the time of sale. To express this as an annual depreciation cost, this amount can be divided by the years of service, meaning the number of years the asset is owned. The resulting amount represents the annual loss in asset value that occurs over each year of ownership. Note, however, that this calculation assumes that the asset is depreciating in a “straight line” and losing the same amount of value each year.

The annual depreciation of a cow in the herd is different from the annual depreciation of machinery or other assets, however. Cows do not depreciate in a straight line. The value of a cow fluctuates throughout her lifetime, and depreciation from year to year will vary accordingly. In most markets, breeding females actually appreciate in value until about 3 years of age. Typically, females that continue to breed back hold their value relatively well until approximately age 6. From there, a cow generally begins to depreciate rapidly, leveling out at a low value at approximately age 9. From then on, cows typically lose relatively little value each year simply due to age, though changes in cow weight or general market conditions can still affect their value.

For planning purposes, the purchase price of bred replacement females minus the salvage value of cows should be divided by the expected years of service—the number of years that a female remains in the herd on average. This value is helpful for estimating the overall annual cost of depreciation for every cow in the operation. However, as mentioned, a cow does not actually depreciate by the same amount each year. Therefore, average annual cow depreciation is not necessarily the best representation of cow depreciation costs per year for a particular female. 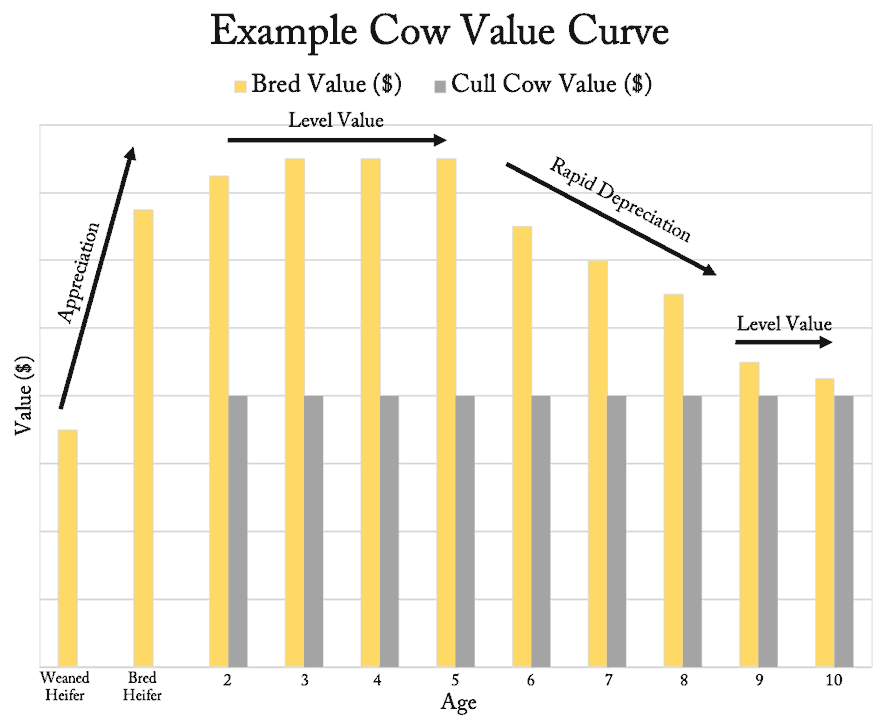 Figure 2. An example of the change that occurs in cow value based on the age and pregnancy status of the cow at the time of sale.

When making decisions related to cow marketing, it is helpful to consider the cow value curve. Figure 2 provides an example. Cow value changes over the female’s lifetime, creating a value curve that is quite different than a straight line of declining value. For example, a bred first-calf heifer (two-year-old cow) will generally be worth more than a bred heifer. In most markets around the country, producers will pay more for a female that has matured, raised her first calf, and bred back to have her second calf. So, from bred heifer to young bred cow, a female generally appreciates rather than depreciates. This has some implications when considering the return-on-investment from reproductive and nutritional management of first-calf heifers.

Cow depreciation can be managed several different ways, but no single way is the “right” way. The best method to control this cost depends on what advantages a particular operation has. Below are several strategies used by commercial producers, some of which are potentially complementary and some of which are fundamentally different.

Although it may seem intuitive that this might be accomplished by developing one’s own replacement heifers rather than purchasing replacements, the decision to develop rather than purchase replacements should be considered very carefully. The authors encourage producers to consider heifer development as its own enterprise that must be independently profitable. If the operation is actually spending more money to develop replacement heifers than it would otherwise spend to buy similar quality replacements, choosing to purchase replacements would result in a lower effective purchase price. Considering heifer development as a separate enterprise from the cow-calf enterprise can help bring clarity to these considerations.

In general, managing cow depreciation by decreasing replacement costs involves purchasing lower value females. Generally, this would be mean purchasing cows that are older, or cows that are at a stage of production that is not as highly valued in the marketplace. Alternatively, some producers find success in simply watching markets closely and purchasing cows believed to be undervalued due to market conditions.

For instance, one approach is to consider the age class of cows and choose to market cows before they depreciate. With the rate of cow depreciation accelerating when cows reach approximately 6 years of age, selling cows at or before they reach this age helps to ensure a greater salvage value at the time of sale. Maintaining a young cow herd can provide more rapid genetic progress and create a more productive herd over time. This also avoids some of the management issues that develop as cows age and begin to face age-related health challenges. However, having a younger herd can present its own challenges as well, as the increased replacement rate results in more first-calf heifers to calve and more young cows that may require higher levels of management and/or supplementation to breed back. Additionally, calves from younger cows generally weigh slightly less at weaning than calves from mature cows, so herds made up of younger cows may generate fewer total pounds of calf weaned on a per cow basis.

Salvage value can also be increased by marketing females that become pregnant but are expected to calve outside of a very short desired calving season. When this strategy is used, lower-productivity, later-calving cows are sold at their peak value as younger bred females instead of as non-pregnant cull cows who didn’t breed back the following year. This can be achieved even if using a longer breeding season, simply by having a veterinarian determine pregnancy status so that later-conceiving females can be sold. A short calving season is economically beneficial for a number of reasons, decreasing labor costs and increasing calf crop value. Choosing to market late-conceiving females can be an especially advantageous strategy when the market for bred females is strong.

Consider also the stage of production at which cows are marketed. Cows determined to have conceived late do not necessarily need to be marketed immediately, since pregnancy status is often determined when cows still have their current calves at side. It may be financially advantageous to plan to market late-conceiving cows later in the production cycle, such as after weaning and/or after adding additional weight and body condition. Note that markets do tend to have seasonal price variation, and the market price for non-pregnant cull cows can be strongly influenced by seasonal market supply and demand for ground beef.

Salvage value can also be increased simply through a commitment to strong marketing in general, finding the best marketing opportunity no matter what type of female is being sold. This could involve participating in special sales of bred females or other methods to capture greater salvage value at the time of sale.

The authors typically encourage producers to consider a hybrid approach, in which both the expected calving date, the age class of the cow, market conditions, and stage of production are considered when making cow marketing decisions. In general, seek to identify cows that are overvalued (in terms of their market value) relative to their true profit-potential on your operation in the coming year. Marketing those females proactively (e.g., as third period pregnant cows after their calves have been weaned) can help to increase the salvage value of cows marketed annually.

Some operations attempt to “upgrade” the value of cull cows by layering on additional enterprises. For example, direct marketing and/or further processing beef from cull cows is a strategy to capture additional value from cull females. Although such activities do increase the value captured by the operation overall, the authors encourage this type of activity be viewed as a separate enterprise independent of the cow-calf operation. Similarly, some producers choose to re-expose cows that failed to become pregnant for breeding in another breeding season (e.g., exposing non-pregnant spring-calving cows for a fall breeding season). This is done with the understanding that those underproductive females would be marketed and not retained by the cow-calf operation, but the market price of these cows would be greater if marketed as pregnant cows rather than as non-pregnant cows. While reasonable on the surface, the authors typically discourage this approach, partly due to concerns about passing sub-fertile, underproductive cows on to other operations. Moreover, the costs associated with carrying non-pregnant cows for additional months are often higher than perceived to be, and the costs may exceed the additional market value captured. Operations considering this approach are therefore strongly encouraged to evaluate their “cull cow upgrading” efforts as an independent enterprise (separate from the cow-calf operation) that must produce greater return-on-investment than other opportunities.

Of course, cow longevity can impact depreciation costs as well. The longer a cow remains a productive member of the herd, the greater number of years over which her cost can be divided. Most cow depreciation occurs in cows ages 6, 7, and 8 years. After about 8 years of age, the cow value curve flattens. This means that the sale value of that cow does not change substantially over the following years. At this point, actual annual depreciation costs of that cow are minimal, and she may generate substantial returns as long as she continues to be a productive member of the herd, raising a live calf each year. Beef cows that do this are indeed very profitable animals. However, few cows have such longevity. Identifying cows that are unlikely to remain productive for such a long period of time and marketing them as younger, higher-value females can be a wise strategy.

As stated above, this publication addresses actual depreciation costs and not tax depreciation as used for deduction purposes. However, strategies to manage actual depreciation costs can affect overall profitability, the asset class mix of the farm or ranch, and the type of sales occurring annually. Sales of breeding stock are often taxed differently (e.g., as capital gains rather than as ordinary income) and may incur a lower tax burden than sales of calves. As a result, marketing strategies discussed in this publication often have favorable tax implications in addition to favorable effects on overall profitability. Producers are strongly encouraged to consult their accountant and tax preparer.

What is your competitive advantage?

What does your operation do well? How can you use the cow value curve to minimize depreciation costs? The answer will look different in every operation. It may be valuable for you to increase replacement rates and sell younger cows when they still hold substantial value in the market. On the other hand, it may be effective to select and manage for longevity, increasing the number of years you maintain cows in the herd. It may be possible to use multiple approaches strategically based on market conditions. Ultimately, regardless of the strategy used, controlling the hidden cost of cow depreciation is a major opportunity to improve the profitability of a cow-calf operation.