An important factor influencing the productivity of a beef cattle operation is the percentage of the calf crop weaned. This is determined by many factors, but certainly one is the number of cows bred during the breeding season. When natural service is used for breeding, the herd bull(s) will have more influence on herd fertility than any other single animal. Accordingly, loss of fertility by a bull can cause substantial loss to a potential calf crop.

Since the majority of beef cows in the United States are bred by natural service, it is important that bulls be managed to optimize breeding performance. Several factors influence a bull’s fertility. A bull must be adequately developed and have reached puberty in order to be an effective service sire. Additionally, several physical characteristics (soundness, scrotal circumference, semen quality, etc) and non-physical characteristics (libido and social dominance) affect the reproductive fertility of herd bulls.

Attainment of puberty is more difficult to define in males, since it not marked by a definable (such as the first ovulation in females). The most commonly used definition of puberty in bulls is when an ejaculate collected by electroejaculation contains at least 50 x 106 total sperm with at least 10 percent progressive motility, or headfirst movement.

The age and weight at which puberty occurs can vary greatly among breeds. However, research with various breeds suggests that a practical indication of imminent puberty is when scrotal circumference is between 27 and 29 centimeters. If a young bull is not yet producing acceptable collections by a certain age, this does not mean that the bull will never become fertile. Sperm quality and quantity continue to increase for several months after the initiation of semen production. About 35 percent, 60 percent, and 95 percent of 12-, 14-, and 16-month-old bulls, respectively, are reproductively mature and produce good quality semen.

The age and weight at which a bull reaches puberty will be affected by the nutritional content of the feed that the bull receives. Although high-energy content can increase weight, height and scrotal circumference per day of age in bulls, high energy diets generally will not decrease age at puberty and may result in other problems associated with over-conditioning (deposition of fat in the scrotum, poor foot structure, poor retention of condition after turnout to pasture, etc.) without hastening attainment of puberty. However, extremely low-energy rations can delay puberty and potentially impair sperm production. Bulls that are undernourished at a young age may never develop appropriately when compared with bulls that are properly fed. In general, therefore, bull developers are encouraged to aim for a nutritional development program that provides adequate rather than maximum rates of gain. 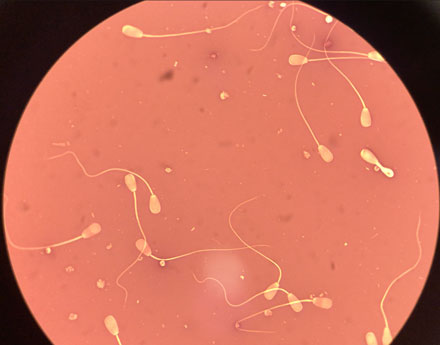 Figure 1. A bull breeding soundness exam includes an evaluation of semen quality, in which sperm cells are evaluated under a microscope.

The Society for Theriogenology developed minimum guidelines for a bull to pass a breeding soundness evaluation (BSE). The evaluation includes a physical examination, measurement of scrotal circumference, and evaluation of semen quality. To pass a breeding soundness evaluation, a bull must have at least 30 percent sperm motility, 70 percent normal sperm morphology, and a minimum scrotal circumference based on age (Table 1). Bulls meeting these minimum requirements are classified as satisfactory potential breeders. If a bull does not pass one of these tests, he is either given the classification of “deferred,” meaning it is recommended that the bull be tested again, or he is classified as an unsatisfactory potential breeder. Bulls should be tested four to six weeks before the breeding season. This allows for time to retest a bull when a deferred classification is given, or time to find a replacement herd bull if the bull is considered unsatisfactory.

The purpose of the physical examination portion of a breeding soundness evaluation is to determine a bull’s mating ability. Mating ability can be described as the physical capabilities needed to successfully breed a cow. A bull must be able to see, smell, eat and move normally to successfully breed cows. The physical examination includes scrutinizing a bull’s eyes, teeth, feet, legs and nutritional level (evaluated by body condition score). Any disease or injury that affects joints, muscles, nerves, bones or tendons may cause a bull to be structurally unsound. In addition to structural unsoundness, diseases or injuries to the penis or prepuce can result in an inability to breed by natural service. These abnormalities will be detected only by careful examination or by observing an attempted mating of a cow. A bull that has high-quality semen but is physically unable to breed cows is unsatisfactory for natural service. 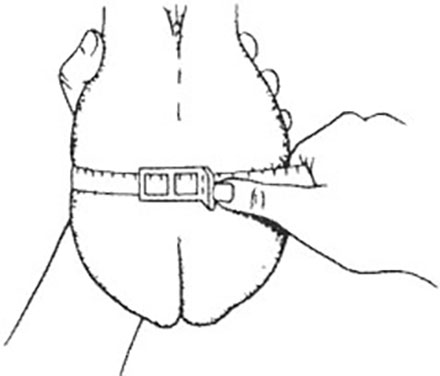 Figure 2. Scrotal circumference is measured by holding the testicles to the bottom of the scrotal sack and placing the tape around the widest point.

This measurement is an indirect estimate of the mass of testicular tissue, which is directly related to sperm quantity and quality. Studies of various breeds and ages of bulls indicate that as scrotal size increases, the probability of a bull passing a breeding soundness evaluation also increases. Additionally, bulls with small scrotal circumference at a year of age tend to have small scrotal circumference at two years of age.

Semen quality is determined by the volume of the ejaculate and by the motility and morphology of the sperm cells. It is important to remember that substandard nutrition, extreme environmental temperatures, and disease can reduce semen quality. The quality of semen from a single bull can change over time.

Sperm morphology is calculated by evaluating the number of normal spermatozoa in a sample ejaculate in relation to sperm with primary and secondary abnormalities. At one time, the Society for Theriogenology recommended recording sperm abnormalities as primary, originating in the testis during spermatogenesis, or secondary, originating in the epididymis during sperm transport. The designation of primary and secondary abnormalities refers to the origin of the defect and not to the severity of the defect. Therefore, both types of abnormalities are equally important when evaluating sperm quality. Recently, the Society for Theriogenology adopted a differential counting scheme that groups defects under categories of head, midpiece and principal piece (tail) abnormalities. The practitioner evaluating the bull will indicate the most common abnormalities noted under the respective headings. A minimum of 70% morphologically normal sperm is still needed to be considered a satisfactory potential breeder.

Is a single breeding soundness exam valid for the life of a bull?

Conversely, a bull that passes a breeding soundness evaluation can fail a subsequent evaluation. Because sperm production is continuous, many factors can affect it. Injury, disease, fever, and extreme environmental conditions can all decrease sperm production. Injury to the penis or testis can also result in infertility in bulls. Therefore, it is important to realize that the results of a single breeding soundness evaluation are not valid for the life of a bull, and testing a bull annually, usually a month before breeding season, is recommended.

Non-physical factors not evaluated in a breeding soundness evaluation

Although it is not possible to evaluate non-physical factors in a breeding soundness examination, libido and social dominance do affect the reproductive performance of herd bulls.

Libido refers to the desire to mate and is thought to be a highly inherited trait. This is because there is more variation in libido between sons of different sires than between sons of the same sire. It is important to remember that scrotal circumference, semen quality, and physical soundness are not predictive of libido. Therefore, a bull that passes a breeding soundness evaluation may have poor libido, or a bull with good libido may fail a breeding soundness evaluation.

A bull’s libido affects the pregnancy rate of a herd and, therefore, can influence the success of an entire breeding season. For this reason, it is important to evaluate a bull’s desire to mate before the breeding season begins. This can be done by placing a bull in a pen with an estrous female and recording the bull’s eagerness to mate over a five-minute period. A bull’s eagerness can range from no sexual interest to successfully mating with the female. Libido can be more practically evaluated by closely watching a bull after introducing him to a cow herd.

A social rank develops among bulls, and this ranking may affect the number of cows a given bull will service in a multiple-sire herd (Table 2). Livestock managers must be aware of these relationships to understand the genetic and reproductive contribution of any one individual bull. For example, a dominant bull with poor semen quality or low libido could reduce pregnancy rates for an entire herd even when more fertile, subordinate bulls are present.

A bull’s seniority is a major factor influencing its social ranking: the dominant bull in a breeding cadre is likely to be an older bull. Therefore, it is important not to introduce a young (yearling) bull into a herd with an older, more mature bull. This can be avoided by separating cows into breeding groups with fewer, similarly-aged sires. In multiple-sire breeding groups, multiple bulls tend to breed the same sexually responsive females. This leads to females being bred by more than one bull as well as the potential for increased injury to bulls of any age.

Individual 2- and 3-year-old bulls with high reproductive capacity have been used in non-synchronized single-sire breeding groups of as many as 60 cows with no decrease in fertility. When cows are synchronized and bred by natural service, however, greater pressure is placed on the herd bull. Therefore, more bulls will be needed to breed a herd of synchronized cows than will be needed to breed the same number of non-synchronized cows. For recommendations related to synchronization and natural service, refer to MU Extension publication G2027, Estrus Synchronization Recommendations for Natural Service Bull Breeding.

Maximum bull-to-cow ratios will vary depending on mating ability, semen quality, and libido of individual bulls. Bull-to-cow ratios can usually be increased in single-sire breeding groups if using mature bulls. However, observe animals regularly during the breeding season if using single-sire groups. If bulls are not mating cows and/or if a large number of cows continue to express estrus throughout the breeding season, consider introducing a different service sire. Poor performance of a bull in a single-sire breeding group will affect the entire calf crop of that group.

It is important to remember that semen quality of an individual bull changes over time. For a bull to be fertile, libido and mating ability should be evaluated periodically. It is encouraged to have a bull breeding soundness exam performed for every bull used for natural service prior to every breeding season.