Identify tree as an ash

To begin, make sure your tree is an ash tree. To identify an ash tree, first look for the following: 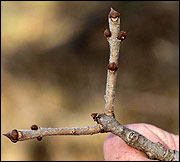 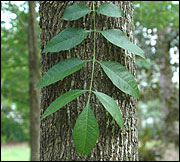 The visual symptoms associated with emerald ash borer infestations are nearly identical to those we often see on ash trees infested or infected by other ash pests and diseases. For example, crown dieback can result from multiple stressors including drought stress, soil compaction or verticillium among others. Therefore, it is important to look for a combination of at least two or more symptoms or signs when trying to determine the presence of EAB in ash trees. 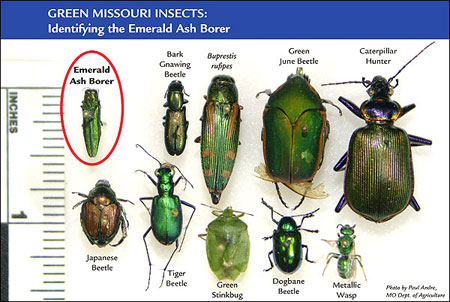 Because a lot of little green insects look like EAB, it's important to know the difference between harmless insects and ash-killing EAB.
(Photo by Paul Andre, Missouri Department of Agriculture.)

EAB larvae have no legs. They are creamy white in color and flattened, with distinctive bell-shaped body segments.
(Photo by Pennsylvania Department of Conservation and Natural Resources — Forestry Archives.) 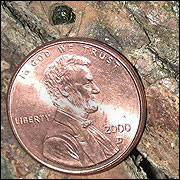 As adults emerge from under the bark, they create a D-shaped, 1/8 inch in diameter emergence hole.
(Photo by Missouri Department of Conservation.)

As larvae feed under the bark, they wind back and forth, which creates serpentine pattern galleries that are packed with frass and sawdust.
(Photo by James W. Smith, USDA APHIS PPG, bugwood.org.) 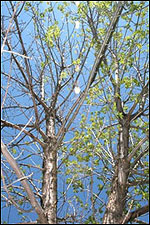 Dieback of the upper and outer crown begins to occur after multiple years of EAB larval feeding. Trees begin to show dead branches throughout the canopy, beginning at the top. Larval feeding disrupts nutrient and water flow to the upper canopy, thus resulting in leaf loss. Foliage in the top of the tree might be thin and discolored.
(Photo by Hank Stelzer, University of Missouri.)

Stressed trees will attempt to grow new branches and leaves where they still can. Trees might sucker excessively both at the base of the tree and on the trunk, often just below where the larvae are feeding.
(Photo by James W. Smith, USDA APHIS PPG, bugwood.org.)

Vertical splits in the bark are caused due to callus tissue that develops around larval galleries. Larval galleries can often be seen beneath bark splits.
(Photo by Collin Wamsley, Missouri Department of Agriculture.) 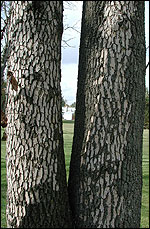 Woodpeckers feed on EAB larvae located under the bark. Feeding is typically evident higher in the tree where the EAB prefers to attack first. Large numbers of larvae under the bark can lead to woodpecker damage that looks like strips of bark have been pulled off of the tree. This is called flecking.
(Photo by Missouri Department of Conservation.)