The invasive Asian longhorned beetle (ALB) hitchhiked to the United States nestled deep within hardwoods cut into crates and pallets and used to import goods from Asian countries. Adult beetles eat leaves and twigs, while young larvae tunnel beneath the bark and feed on phloem (the inner bark) of the branches and trunk. As they grow, the larvae tunnel deeper into the tree through the sapwood. Left undetected, the ALB will girdle the vascular system of trees, which causes them to wither and die.

ALB could be worse than Dutch elm disease, chestnut blight and gypsy moths, destroying millions of acres of America’s hardwoods. Our lumber, maple syrup, nursery, commercial fruit, and tourism industries could be devastated. It is vital that we keep the ALB out of Missouri. 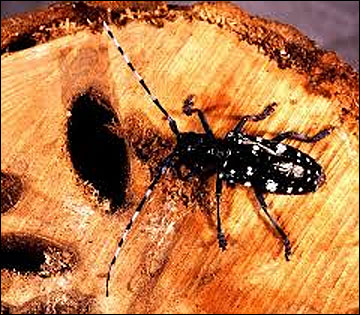