Gypsy moth (Lymantria dispar) is a destructive, exotic forest pest that was accidentally introduced into the United States in 1869 by a man hoping to mate them with silkworms to create a hardier, more productive silk-bearer. When some of his gypsy moths escaped, the trouble began.

It is currently established throughout the northeast and parts of the upper midwest. This moth feeds on more than 300 species of trees, but it prefers oaks the most. 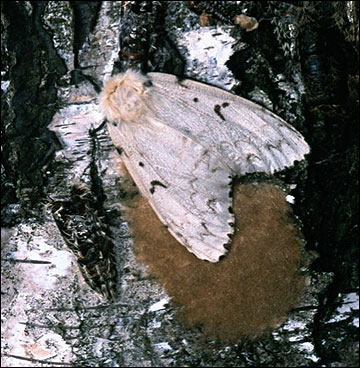 With all the recent news about the emerald ash borer, thousand cankers disease, Asian longhorned beetles and pine shoot beetles, it is very easy to forget about the gypsy moth, which is another serious threat to Missouri’s trees. (Photo by Hannes Lemme, bugwood.org.) 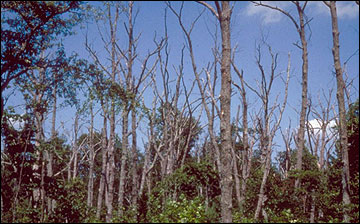 More than 75 million acres in the Northeast United States have been defoliated by gypsy moth since 1970. Gypsy moth defoliation causes extensive tree mortality, reduces property values, adversely affects commerce and causes allergic reactions in sensitive individuals that come in contact with the caterpillars. Almost 70 percent of the susceptible hardwood forests in the United States have not been infested by gypsy moth, but they are still at risk. (Photo by Tim Tigner, Virginia Department of Forestry, bugwood.org.)