Nitrogen in the Environment: Leaching

When soil becomes excessively wet through rainfall, the soil will reach a point where it cannot hold any more water. This happens because the air spaces between soil particles become filled with water. As these air spaces fill, gravity will cause water to move down through the soil profile. (It can also pound or run off the surface of the soil.) As water moves down through the soil, nitrogen can be carried with it. This is called leaching (Figure 1). 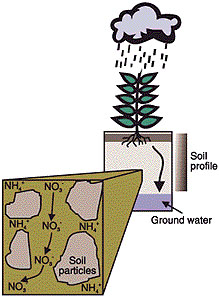 Figure 1
Heavy rainfall can cause nitrates (NO3-) to move down through the soil, a process called leaching

Forms of nitrogen that leach

Nitrate (NO3-) is primarily the form of nitrogen that is leached. Nitrates may originate from manures, the decay of plants and other organic materials or from fertilizers. Nitrate is very mobile and is easily moved by water. Other forms of nitrogen, such as ammonium (NH4+), generally do not leach.Unlike nitrate, the ammonium form does not leach because it is attached to the soil and resists movement with water. The forces that cause ammonium to attach to the soil are somewhat like the forces that cause metal objects to become attached to a magnet.

An important factor that can affect the degree of leaching is how much water a soil can hold. For example, by their nature sandy soils cannot hold as much water as clay soils. This means that leaching of nitrates will take place much more easily in a sandy soil compared to a clay soil. Often, leaching is not a significant factor in heavy clay soils.

Other factors that can affect nitrate leaching include amount of rainfall, amount of water use by plants and how much nitrate is present in the soil system.

The potential of nitrates from animal manure and nitrogen fertilizers getting into groundwater can be reduced through good management practices. Applying manure and nitrogen fertilizers when crops are actively growing, and using nitrates for growth and development will reduce the amount of nitrate in the soil system and thus the amount that could potentially be leached. However, little can be done to minimize the leaching of nitrates into groundwater that result from the ongoing decay of organic matter in the soil. In this situation, nitrates are simply a natural biological result of an ongoing cycle of nitrogen transformation processes in the soil.

This material is based upon work supported by the United States Department of Agriculture, Extension Service, under special project number 89-EWQI-1-9203.