Nitrogen in the Environment: Ammonia Volatilization 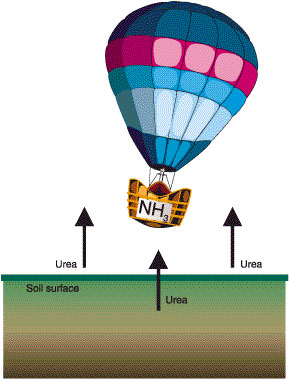 Figure 1
Urea is highly volatile. So if it is on or near the soil surface, it is easily converted and escapes as ammonia gas (NH3)

The process of ammonia volatilization does not directly impact water quality. Ammonia volatilization results in a net loss of nitrogen from the soil system. Therefore, indirectly it will result in less soil nitrogen being converted into the nitrate form. In this form, and when soils are excessively wet, nitrate is very mobile and easily moves with water. Nitrate is the form of nitrogen most likely to be lost to groundwater. For information involving health concerns regarding nitrates in groundwater, see MU publication WQ258.