As discussed above, the lack of escape cover was identified as one of the primary limiting factors and a habitat component that needed to be addressed (Figure 23). Edge feathering the woodland edges provided access to escape cover in certain locations. However, a large portion of the farm did not have existing escape cover, so shrubs and thickets were planted to advance plant succession.

The term “covey headquarters” is used to describe areas of dense shrubby cover that bobwhites use to escape from predators and harsh weather. They also loaf in this type of cover daily. Covey headquarters are shrubby thickets with a 3- to 12-foot-high canopy and with little or no vegetation to impede the birds’ movements at ground level. Shrubs that provide this type of structure include gray or roughleaf dogwood, American or Chickasaw plum, blackberry, false indigo and shrub lespedeza (Figure 24). Other good species include hazelnut, elderberry, chokecherry, witch hazel and aromatic sumac.

Covey headquarters were established within select conceptual home ranges for escape cover in areas next to early successional herbaceous vegetation that provided nesting and brood-rearing habitat (Figure 25). In addition, the edge-feathering practices provided escape cover habitat in areas where shrubs were not planted. 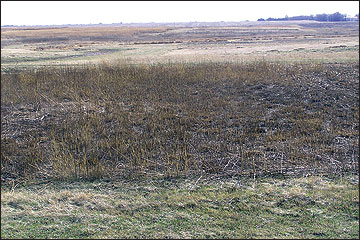 Figure 23. A lack of escape cover was one of the habitat limiting factors identified at the MU BREC. Covey headquarters and shrubby thickets were established to address this important habitat component. 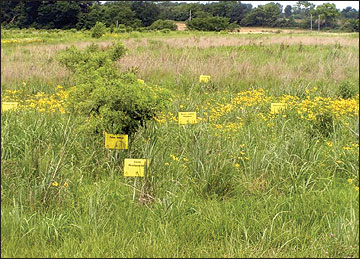 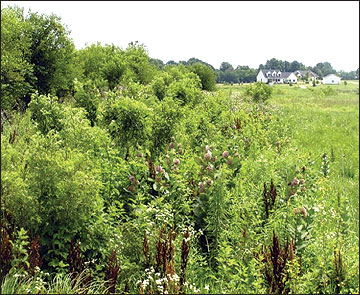 Early successional herbaceous vegetation provides important nesting and brood-rearing habitats for bobwhites and many grassland bird species. However, these types of plant communities require some form of active management — such as prescribed fire, disking or the selective use of herbicides — to keep from becoming a dense, rank stand of grasses or from advancing to a woodland or forest. Dense sod or vegetation provides little habitat and is detrimental to wildlife feeding and movement (Figure 26). These rank stands of grasses can be improved by disturbances that reduce residue and create bare ground conditions that encourage the germination of desirable seed-producing forbs and legumes.

Both prescribed burning and disking were used at the MU BREC to improve plant diversity in existing stands of native warm-season grasses and as a management tool to promote early successional habitat. The timing of these management practices depends on the specific objectives. Figure 27 depicts the time of year to conduct prescribed fire and disking practices to achieve a specific outcome or objective. 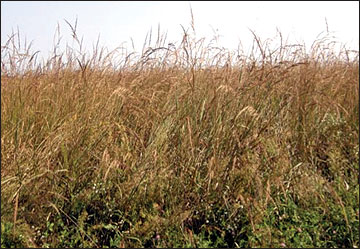 Figure 26. Rank and dense stands of native warm-season grasses needed to be managed to provide more optimal habitat and use by a variety of wildlife species, including bobwhite quail.

* Interseed in conjunction with the management options above. Do not interseed birdsfoot trefoil, serecia lespedeza, sweet clover or crown vetch.

Note
Shaded cells indicate when practices were implemented. Left cell under each month indicates first half of month; right cell, second half.

Prescribed burning is the practice of applying a controlled fire within a predetermined area as a habitat management tool. Prescribed fire removes plant litter, improves the level of the vegetation at ground level and stimulates the desirable annual, seed-producing forbs and legumes that are in the seed bank (that is, the reservoir of viable seeds in the soil). Fire improves wildlife habitat by setting back the plant successional stage on an area, controls undesirable vegetation and reduces wildfire hazards (Figure 28).

At the MU BREC, rank stands of native warm-season grasses were burned either in the spring or fall, and one-third of each burned area was also disked. Fall and winter burns were conducted to stimulate the germination of annual weeds and forbs in stands of warm-season grasses (Figure 29). These practices also helped to improve plant structure and diversity and to increase insect populations, an important food source for bobwhites during the summer.

Burning during the spring (March or April) or on a short duration (two- to three-year interval) tends to promote herbaceous vegetation and potentially a greater density of warm-season grasses, which provide nesting cover for bobwhites and are ideal for grassland birds. Burning during the late summer or fall (August through October) tends to stimulate the germination of forbs and legumes. 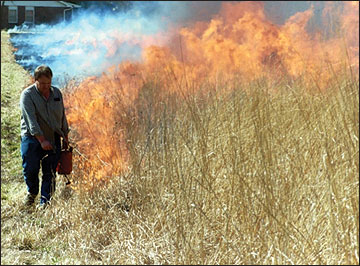 Figure 28. Prescribed fire was used to set back plant succession and promote plant diversity in stands of native warm-season grasses. 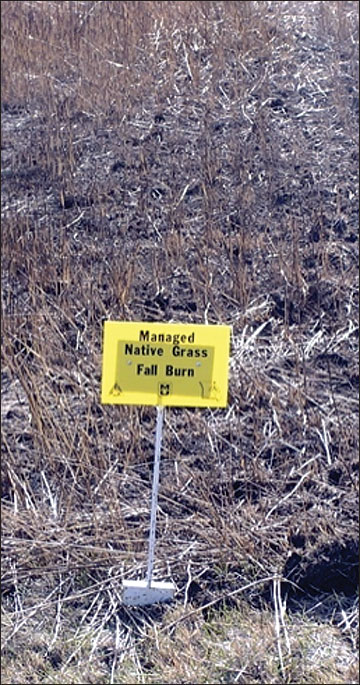 Figure 29. A prescribed fire was conducted during the fall to set back plant succession in native warm-season grass stands to promote the growth of annual weeds and forbs.

Disking can also be used to set back plant succession (Figure 30). Dense, rank stands of cool-season or warm-season grasses can be disked to open the canopy and allow beneficial forbs to establish, which provides food for wildlife. Disking improves the habitat structure and composition by incorporating litter, reducing the density of the vegetation at ground level and stimulating the germination of desirable forbs.

At the MU BREC, disking was conducted in rank stands of cool-season and warm-season grasses and in areas located next to shrubby cover — such as covey headquarters, downed tree structures, edge feathering and native shrub thickets — to create early successional vegetation that benefits a variety of wildlife species.

Timing of disking can also influence the composition of the herbaceous vegetation. Disking during the fall and winter reduces the dominance of the native warm-season grass in the stand and tends to promote the germination of forbs and legumes. Disking in the summer is not recommended as it would destroy beneficial cover that may be important during the nesting and brood-rearing season.

Figure 30. Strip disking was also used to create a disturbance, set back plant succession and improve plant diversity in stands of native warm-season grasses and cool-season grasses such as tall fescue. Disking during the fall promoted the growth of forbs and legumes within the stand of grasses. 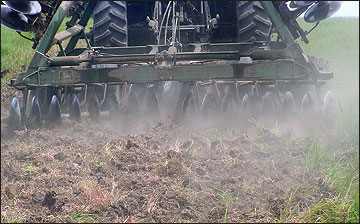 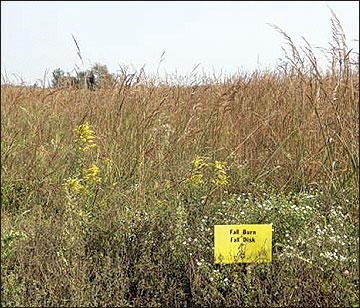 Technique 3: Selective use of herbicides

The selective use of recommended herbicides is another technique that can be used to set back plant succession and control undesirable vegetation. Certain species of nonnative plants, such as tall fescue and sericea lespedeza, can have invasive growth habits and outcompete more desirable native vegetation that provide food and cover for wildlife (Figure 31).

At the MU BREC, glyphosate (Round-up) was applied in certain areas in the fall to prevent tall fescue from encroaching on the field borders and underneath covey headquarters habitats that had been created. In addition, herbicides were used in combination with prescribed fire and strip disking to control nonnative plants in strategic locations on the farm. Stands of sericea lespedeza in native warm-season grasses were controlled through a combination of a prescribed fire conducted during the spring with follow-up applications of the herbicides metsulfuron (Ally) and triclopyr (Remedy). However, each of these nonselective herbicides will also suppress the germination and growth of desirable native forbs and legumes after establishment, so success depends on applying them at the proper time, targeting the plant species to be controlled and following all label directions. 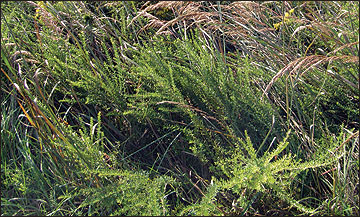 Figure 31. Stands of sericea lespedeza were controlled through a combination of a prescribed fire and herbicide applications.