Methods for Counting Quail on Your Property

Populations of bobwhite quail have declined dramatically across Missouri since the 1980s (Figure 1). Although some areas of the state have habitat to support good quail populations, the availability and quality of habitat has declined in most areas, which is a primary reason for declining populations across their range.

An increasing number of Missouri landowners are interested in improving quail habitat on their property. To do so, they must first understand the biology of bobwhites and then evaluate the quality and quantity of available habitat. Management practices can then be implemented that address the habitat components identified as most limiting, such as nesting, brood-rearing and escape cover. MU Extension publication MP902, Missouri Bobwhite Quail Habitat Appraisal Guide, outlines a systematic process for evaluating the quantity and quality of habitat on your property. It includes an appraisal tool that can be used as a guide to measuring habitat improvements that result from management over a period of time.

Landowners who have implemented habitat practices often wonder how to determine if the quail population on their property has increased in response to these management efforts. This guide describes methods for estimating quail populations on a property and techniques for monitoring population fluctuations over time. 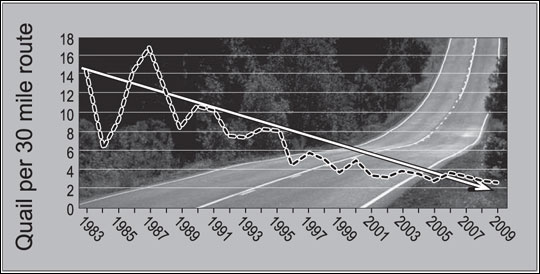 Figure 1
Missouri statewide population trends for bobwhite quail from 1983 to 2009 show a long-term decline in numbers of quail. Data are summarized from the Missouri Department of Conservation annual August roadside survey.

Landowners and managers have several options for assessing quail populations and their fluctuations by either indirect or direct counting methods:

These methods vary in their degree of difficulty to implement. Each method can be used to obtain specific information, but none provides a complete picture of quail populations at a given time. However, when used on a consistent basis over a period of years, these counting methods can indicate trends in the local quail population and provide information about how it is responding to management.

Two types of call counts used for estimating bobwhite populations are spring (mating) and fall (covey) call counts. These counts provide information that can be used to evaluate the current status of the population on your property and how the population has responded to management. Conduct call counts both before and after initiating a bobwhite quail management program. Keep records from year to year so that you can relate quail numbers to weather, habitat conditions and other changes that have occurred on the landscape.

Depending on the property and terrain, a quail whistle call can be heard over a distance of 550 yards, so listening stations can be located up to half a mile (1,100 yards) apart (Figure 2) to reduce the chance that different observers are counting the same birds. With a 550-yard listening radius, observers can hear quail within about a 200-acre circle around them.

Give observers, or listeners, a copy of the aerial photograph or map of the property so they can mark calling locations during the count. 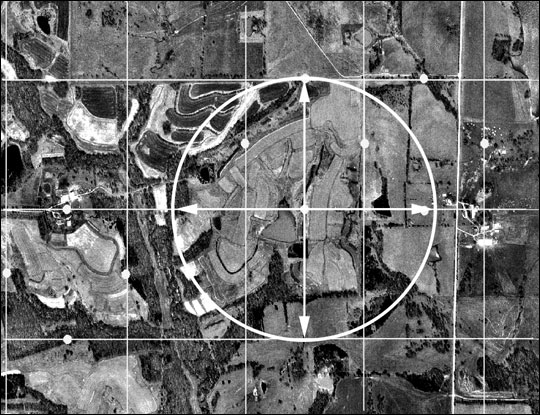 Figure 2
Depending on the topography, one observer can hear a whistling bobwhite within about 550 yards in any direction, or within a 200-acre area.

Counts conducted in the spring and early summer can provide an index of whistling males (Figure 3). During this time, males give the familiar "poor-bob-white" whistle to attract a mate. The calling heard at this time is thought to represent bachelor, or not-yet-paired, males in the population. Surveys should be conducted during peak calling, which is typically in June.

To get an index of the number of birds available for breeding, listen for whistling males after sunrise at the listening stations you have established. Monitor each station for five minutes, and simply count the number of individual quail you hear. Mark the location of calling males on a data sheet or aerial photo to help you determine if a bird you hear calling has been previously identified. Conduct these surveys at least three times in June.

Although males will whistle throughout the day, the most consistent measurements occur during the first two hours of daylight. Be careful not to recount the same bird during this process. If you listen at these locations at the same time of day every year, you will be able to track how well birds are surviving the winter in relation to your management. These counts provide an index of breeding "capital." 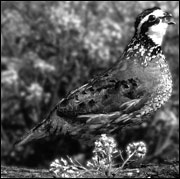 Figure 3
Male bobwhites give the familiar "poor-bob-white" whistle to attract a mate during spring and summer.

The covey-call survey can be used to estimate the size of the fall bobwhite population or to provide a measurement of production just before the hunting season.

During the late summer and fall, birds from different broods begin to mix and form coveys, or social groups, of 20 to 30 birds. These groups begin the characteristic night roosting behavior of forming a circle on the ground, tails together and heads pointing out (Figure 4) — a behavior that may have important social and heat conservation benefits. Group size may reduce to 10 to 15 birds as each covey begins to settle into its winter range during the fall. At this time, populations have reached their peak for the year.

Covey calling behavior. Just before leaving the roost in the early morning, one or two birds from a covey will whistle, vocalized as "koi-lee." These calls announce a covey's location to neighboring coveys, and coveys appear to use these location cues to space themselves across the landscape, which, in effect, reduces competition for food and cover.

Coveys call at high enough rates that the calls can be used to monitor quail abundance in a given area. Covey-call surveys work because bobwhites are social birds and, during the fall, coveys communicate with each other by whistling just before sunrise. Most whistling occurs sporadically 20 to 30 minutes before sunrise.

Peak timing of the fall covey call. Covey whistling begins in September and peaks in mid to late October. Research has shown that the best calling period is usually during the last two weeks in October (Figure 5). Although peak calling activity may shift by two or more weeks from year to year, the latter part of October usually provides the most consistent time to conduct the survey.

Monitoring the intensity of calling a few times during September and early October will help identify when calling begins to increase, indicating peak timing, and when more intensive surveys could be conducted. Surveys should be done only during the first calling period before sunrise and, to minimize severe weather effects, should be limited to mornings with low cloud cover (less than 50 percent), low wind speed (less than 3 miles per hour) and steady or slightly rising barometric pressure.

Estimating relative abundance. To conduct a covey-call count, listen only on calm, clear mornings from 45 minutes before sunrise until sunrise. Listen carefully for the "koi-lee" whistle, as it typically lasts only about 30 seconds.

For a more accurate count, survey each listening station on the property on the same morning and conduct surveys two to three different mornings. Use the greatest count of coveys for estimating the fall population. On smaller acreages, two observers may be enough to conduct the survey. On large properties without enough observers to survey all points in a single morning, the area can be surveyed in blocks, the size of which depends on the number of available observers.

For example, Figure 6 is an aerial photo of a 300-acre farm with a listening station designated on the area. The observer heard four coveys and marked their locations on the map. Assuming an average covey size of 12 birds, you could estimate that about 48 birds were using the 300 acres (a population density of one covey per 75 acres or one quail per 6.25 acres). 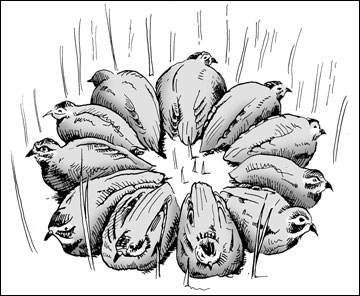 Figure 4
A covey of roosting bobwhites. 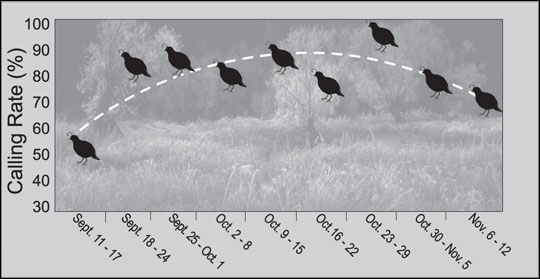 Figure 5
Percentage of coveys that call by week during October and early November. Calling rates tend to peak during the last two weeks of October. 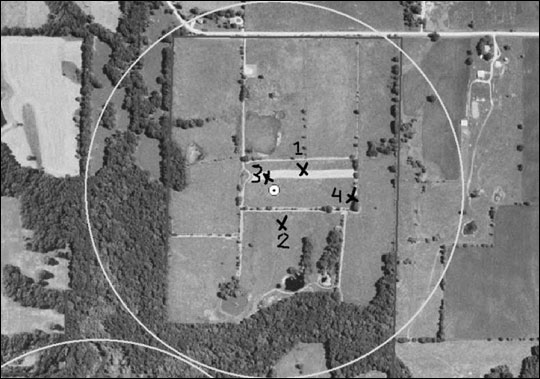 Figure 6
Use an aerial photo of your property to determine the best locations for observers to listen for covey calls and to mark covey locations (X).

Bobwhites are social birds that use calls to communicate among coveys. When the number of coveys increases in a given area, "quail talk" among coveys also tends to increase, partly because the percent of the coveys that call typically increases. However, not all coveys call during the peak time in October. This failure to call may be due to effects of covey density or weather conditions.

Table 1
Effect of covey abundance on covey call rate and adjustment factors for estimating number of coveys in an area.

For best results, collect data in a consistent manner and keep it on file for year-to-year comparisons. 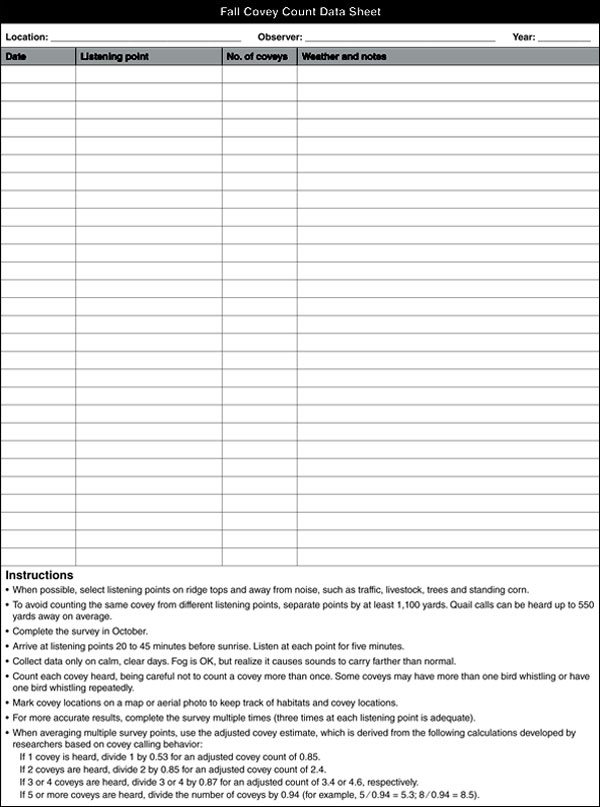 Under these conditions, fog often develops. Fog does not affect bird calling but does cause sound to carry farther, so coveys will sound closer than they really are.

Various methods can be used to estimate quail populations based on direct observation. Several, such as line-transect counts (distance sampling) and mark-recapture, are often used during research projects but are difficult for individual landowners to implement so are not discussed here. Methods that are commonly used in Missouri are roadside counts, covey flush rates and drive counts.

Since 1983, the Missouri Department of Conservation has relied on direct counts of bobwhites that are observed along county gravel roads to monitor long-term population trends across the state. These counts, conducted each August, have been used to provide an index of the statewide quail population. A designated transection 30 miles long is driven at no more than 20 miles per hour in two-hour blocks of time either just after sunrise or just before sunset. All quail observed are counted and recorded. Information obtained through these annual August roadside surveys is available from the Missouri Department of Conservation, http://mdc.mo.gov/. Although these counts provide an index of bird numbers that can be used to track population trends from year to year across large regions of the state, they do not provide reliable population estimates on small acreages.

Drive counts can be conducted by several observers walking side-by-side, with or without dogs. Observers simply count the quail that flush. However, observers must be careful not to count the same birds twice. The more observers doing the count, the more accurate the count will tend to be. At least 15 to 25 percent of the property should be sampled. Although these counts likely underestimate the population, they give an estimate of the minimum population in the area.

Assessing the quail population each year allows landowners and managers to gauge the effectiveness of their management practices. Knowing the abundance of bobwhites in an area can be useful in planning hunting and management activity. However, being consistent in both the survey timing and methods is important. The following guidelines may be useful in designing a comprehensive population monitoring system:

Contact the Missouri Department of Conservation and your local MU Extension center for more information on bobwhite quail management.