Honey bees and other insects help pollinate cotton. Cotton is primarily a self-pollinator, but it is partially pollinated by insects. These insect pollinators help set a good crop and good cross pollination is desirable; therefore, the selection and timing of insecticide application should be considered when pollinators are present in the field. Pollinators tend to leave cotton fields by midafternoon, but pest species may remain active into the night. Insecticides application later in the evening helps to minimize harm to pollinators while maximizing control of the pest species.

Numerous beneficial insect and arthropod species can be found in cotton fields attacking pest species. These beneficial species attack the egg, immature (larval, nymphal and pupal), and adult stages of most pest species. Both beneficial parasitoid and predatory species are present throughout the field season. In addition to the beneficial arthropods, numerous disease organisms may infect cotton pests and further limit their population growth.

Ants are important and overlooked predators in cotton fields. Several different species may inhabit fields as the worker caste ants (approximately 1/8 inch in length, wingless, and with a narrow waist) forage for insect eggs and larvae. Ants are an important predator of bollworm eggs and larvae.

Assassin bugs and other piercing-sucking predators 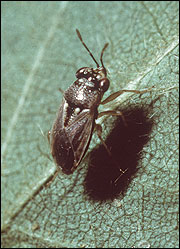 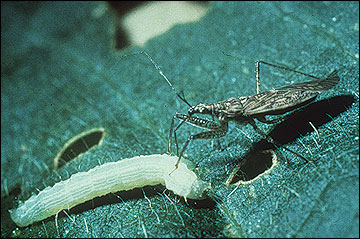 Several different species of assassin bugs (yellow to black coloration) are predators of both immature and adult stages of insects (Figure 47). These piercing-sucking insects readily attack the large larval stages of lepidopteran insects (e.g., bollworm). It is important to exercise caution when handling these insects because their bite is very painful. 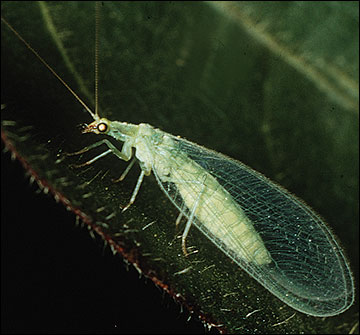 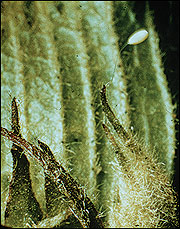 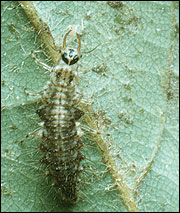 Two lacewing species (brown and green) occur in cotton fields, but the green one is more commonly found. Adult lacewings are fragile in appearance with long antennae and large wings with many pronounced veins (Figure 51). Female lacewings deposit their white eggs at the end of long, threadlike stalks (Figure 52). The larval stage is a mottled brown with long sickle-shaped mouthparts (Figure 53). Adults may feed on insect eggs, but the larvae are more important because they are voracious predators of aphids and bollworms (eggs and small larvae). A single lacewing larva can consume more than 40 bollworm eggs in one day. 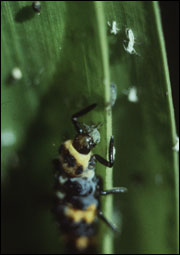 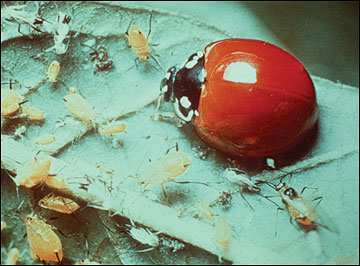 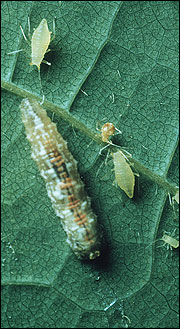 Many species of ladybird beetle can be found in cotton fields. They range in size from 3/100 to 1/2 inch in length, are orange to black in coloration, and may or may not possess spots. The eggs (yellow-orange, football-shaped) are laid singly or in masses of 10 or more depending on the species. The larval stage is typically "alligator-shaped" and black with brightly colored markings. Both larval and adult stages (Figures 54 and 55) of ladybird beetles prey upon aphids, spider mites, the eggs and larvae of most lepidopteran cotton pests (e.g., cotton bollworm), and other soft-bodied insects. 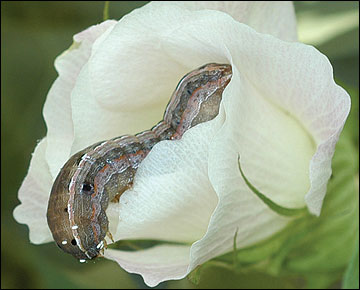 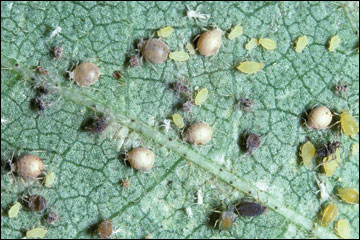 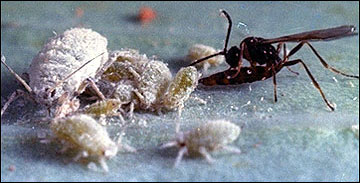 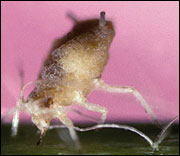 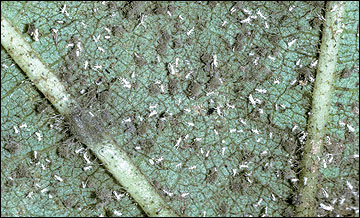 Figure 61
Aphid bodies overgrown by saprophytic fungi after being killed by Neozygites fresenii.

Several parasitoid species of flies and wasps may attack cotton pests (Figure 57), especially aphids and the larvae of lepidopteran pests. Various tiny wasps regularly lay their eggs inside the bodies of aphids. Within a few days the aphids are paralyzed, become swollen and discolored, and eventually die (Figure 58). Several days later, the adult wasp (Figure 59) emerges through a circular hole cut in the "mummified" body of the aphid. Other tiny wasps and parasitic flies attack the egg or larval stage of armyworms, bollworms, loopers, and other lepidopteran cotton pests.

Several naturally occurring pathogens also may infect and reduce populations of cotton pests. For example, epizootics or outbreaks of the fungal pathogen Neozygites fresenii can rapidly reduce cotton aphid infestations within 7 to 10 days. Infected aphids typically die with their mouthparts still inserted into the leaf and are covered with a velvety white or light gray growth (Figure 60). Later, secondary pathogens infect the aphid bodies, giving them a fuzzy olive-brown appearance (Figure 61). Other pathogens (fungal or viral) are specific to lepidopteran pests and kill their hosts within a few days after infection. Infected, dead larvae (discolored) are typically found hanging from the bottom of a leaf (viral) or standing erect on a leaf (fungal). The viral particles or fungal spores are eventually released back into the environment to infect another generation of pests.