The European corn borer, Ostrinia nubilalis (Hübner) was first observed in the United States near Boston in 1917, and by the 1940s it had migrated into Missouri.

This insect overwinters as full-grown, fifth-instar larvae inside the stalks and in field debris of its cultivated and wild host plants. Once a minimum temperature of 50 degrees Fahrenheit is reached, the larva pupates and the adult moth emerges in May. The adults usually mate within 48 hours of emergence in the grassy field margins around crop fields. The female moth has a pale-yellowish color with irregular, wavy, bands on their wings (Figure 1, left). Male moths are smaller and darker and have olive-brown wing markings.

The female moth is an active flier and is capable of traveling 5 miles in a night. At dusk she will begin laying her eggs in masses of five to 50 eggs on the underside of leaves near the leaf midrib. The flattened eggs overlap like fish scales and are initially white before turning yellow (Figure 1, right). Within 3 to 7 days, the young larvae hatch and are initially dull white with several rows of small brown spots. Fully grown larvae are about 1 inch long, light tan to a pinkish gray, and marked with two rows of small, circular, brown spots. European corn borer development rapidly slows in the summer when temperatures exceed 85 degrees Fahrenheit. 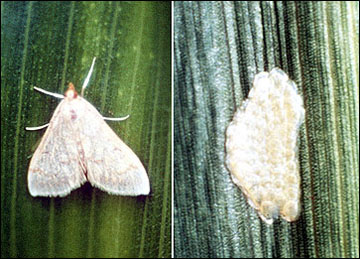 Corn (field)
First-generation European corn borer larvae can damage leaves by removing a thin, transparent layer, or "windowpane," of tissue. Feeding damage during the mid- to late-whorl stages gives the unfurled leaves a "shothole" appearance. By the third instar (about 1/2 inch in length), the larvae move from the leaf sheath or midrib and bore into the stalks (Figure 2). When corn plants are small (less than sixth-leaf stage), 70 percent or less of the larvae may die from various causes, including inclement weather conditions and attacks from natural enemies. An important deterrent to European corn borer larvae in young corn plants is DIMBOA, a hydroxamic acid (2-4 dihydroxy-7-methoxy-1, 4-benzoxazin-3-one) that occurs naturally in the corn leaf tissue. Concentrations of DIMBOA decrease as the plant matures. 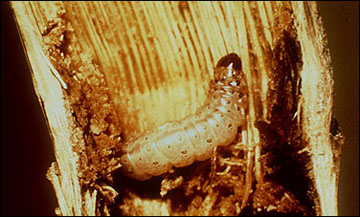 Second- and third-generation European corn borer larvae may attack corn during the silking and tasseling stages. Second-generation larvae initially feed on pollen and leaves before boring into the ears and stalk (within the ear zone). In fields where the corn kernels are still in the milk stage, third-generation larvae feed on the leaf sheaths and collars, stalks and ears. 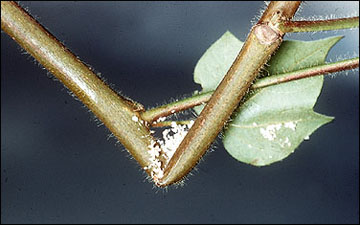 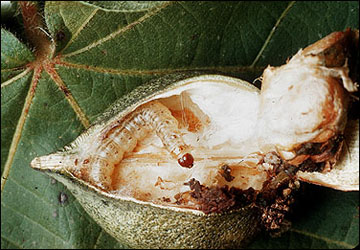 Grain sorghum
Late-season European corn borer infestations in grain sorghum can cause the loss of seed heads when larvae tunnel into the stem just below the seed head (Figure 5). 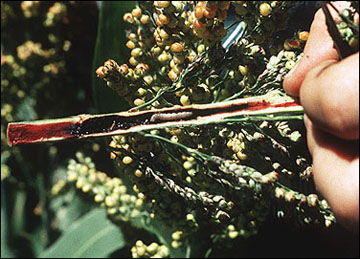 Corn (field)
Once moths have been detected in traps (blacklight or pheromone-baited) and corn has reached the sixth-leaf stage, fields should be scouted weekly for the next two to four weeks to detect first-generation European corn borer infestations. Monitoring for European corn borer moth dispersal also can be supplemented by field observations and walking through grassy field margins where the moths gather to mate and obtain water. These infestations usually start in late May to early June in central Missouri, and seven to ten days earlier in the southeastern counties (timeline). Initially, scouting should be concentrated in the fields planted earliest. Focus your efforts around the middle third of the plant because European corn borer eggs are generally deposited on the basal third of the leaf near the midrib. For second-generation European corn borer infestations, fields should be scouted beginning around mid-July and until early August in central Missouri. To determine whether an insecticide treatment is necessary, examine 100 plants (10 per site) per field for signs of feeding damage or larvae.

Cotton
Once corn silks begin to dry and plants mature, European corn borer moths will be highly attracted to flowering cotton plants. Rank cotton with a closed canopy is also more attractive to the moths. The egg masses are generally deposited on leaves deep in the canopy. During the early to middle stages of crop development, boring activity is recognizable by the wilted terminals or leaves. This feeding damage resembles that caused by drought; however, noninfested, adjacent plants remain healthy in appearance. Typically, European corn borer larvae enter the boll near the calyx, whereas cotton bollworm or tobacco budworm larvae bore further up on the boll. Because the egg masses are extremely difficult to detect, scouting efforts should focus on finding the small European corn borer larvae between the bracts and the boll wall.

Grain sorghum
Young larvae usually feed in the leaf axils. Later, the larvae will bore into the stalk when half grown (approximately 1/2 inch in length).

Corn (field)
For first-generation European corn borer infestations, treatment is recommended when 50 percent of the whorl-stage plants have damaged foliage and live larvae are present. Later in the season, the recommended threshold is when 50 percent of the plants are infested (first leaf above and below the ear) with European corn borer egg masses and larvae.

Cotton
No established threshold exists in Missouri for European corn borer infestations in cotton. In North Carolina, a recommended threshold is 3 percent or more of the plants infested with young live larvae.

Corn (field)
Various control strategies can be deployed against the European corn borer to lessen the probability of infestations and yield losses. Before the advent of no-till, producers would plow under all crop and weed residue to kill most overwintering larvae. Cultural management practices such as early planting and harvesting can reduce the number of insecticide treatments needed for European corn borer infestations. Even though early-planted corn is more susceptible than late-planted corn to infestation by first-generation European corn borers, first-generation larvae are easier to scout for than second-generation larvae and easier to control with insecticides (fewer applications and greater coverage).

Precaution
Before you select and apply an insecticide, review the manufacturer's label for information on the safe use of the material.

Insecticides can provide effective control of the European corn borer (particularly for the first generation) if properly timed (within 7 to 10 days of hatching) and applied (down into the whorl) so to penetrate the plant canopy. Granular formulations are more effective than liquid ones for first-generation European corn borer infestations; however, both formulation types are recommended for second-generation infestations. Growers should first consider the following factors when determining whether an insecticide treatment will be profitable:

Cotton
Both light and pheromone-baited traps should be used to monitor moth flights and trigger intensified scouting efforts in cotton. Growers can minimize the attractiveness of their cotton to European corn borer moths with early planting dates, early-maturing varieties, and maintaining uniform plant growth. Avoid excessive irrigation and nitrogen applications that delay crop maturity and increase the crop's window of susceptibility to European corn borer damage.