Nematodes cause more injury to cotton grown in Missouri than any other disease except seedling diseases. This is because farmers have few tools to help them manage these nematodes to protect their crop. This publication is designed to help farmers determine if nematodes are present in their fields and decide what to do if they are present.

What is a nematode?

Nematodes are wormlike animals that ranging in size from microscopic to more than 10 feet in length. There are more than 10,000 known species of nematodes. Fortunately, only a limited number cause problems to humans and domesticated plants and animals.

Recently, members of the Cotton Foundation, part of the National Cotton Council, decided that too little was known about cotton nematode problems in the United States. They asked scientists from each cotton-producing state to form a committee and conduct studies, including surveys of cotton fields for nematodes. MU scientists surveyed for cotton parasitic nematodes in Dunklin, New Madrid, and Pemiscot counties, which produce about 98 percent of Missouri’s cotton. They sampled 90 fields in this three-county area. Lance nematodes were found in two fields and reniform nematodes in three, but root-knot nematodes were present in many fields. The percentage of cotton fields where root-knot nematodes were found was 45 percent in Dunklin, 20 percent in New Madrid, and 26 percent in Pemiscot. Fortunately, only a few fields had enough root-knot nematodes to cut yield.

These nematode species are generally considered to be among the 10 most important plant pathogens in the world and are responsible for hundreds of millions of dollars in crop losses annually. All four species occur in the U.S. Cotton Belt, but only some populations of the species Meloidogyne incognita (also known as the southern root-knot nematode) attack cotton. Recent survey data show populations of this nematode are widespread throughout the Cotton Belt. More than 75 percent of the cotton fields in some areas are infested. Meloidogyne incognita was the only root-knot nematode found in Missouri. Cotton yield loss due to root-knot nematodes in Missouri averaged 7.9 million pounds of lint each year from 2004 to 2008. The value of this loss was about $5.25 million per year.

Like all other plant parasitic nematodes, root-knot nematodes must have a plant to feed on to complete their life cycle. The simple life cycle has four juvenile stages in addition to egg-laying adult female. Egg production occurs without sexual cross-fertilization of eggs. Even though adult males may be present, they are not required for reproduction. The number of days required for this nematode to complete its life cycle depends on soil temperature. One life cycle, from egg to reproducing adult, will occur every 28 days when the soil temperature is 80 degrees Fahrenheit. However, little or no development occurs at soil temperatures below 50 degrees or over 100 degrees.

After the second-stage juvenile hatches from the egg, it migrates through the soil in search of a cotton root. It usually enters a root near the tip and begins feeding. Since the nematode is much smaller than the root tip, it can completely embed itself within the root. Once feeding begins, it loses its ability to move within the root. As many as 20 juveniles may invade a single root tip. Second-stage juveniles cause little physical damage to the roots during the penetration process. Most damage to the cotton plant results from chemical changes caused by nematodes feeding.

The plant root cells near the nematode’s head are not killed by the feeding, but they are transformed. The cells enlarge many times their normal size and are called “giant cells.” Giant cells, which are approximately 10 times larger than normal root cells, interfere with the development of the root. The damaged root cannot transport water and nutrients from the soil to the developing leaves and bolls. In addition, some of the sugars the plant produced by photosynthesis to support normal root growth are diverted to the giant cells to sustain the developing nematode.

About three weeks after root penetration, the female becomes swollen, and pear-shaped. The male at the same time reverts to its previous worm-shape and exits the root without feeding. Males are not necessary for reproduction. The adult female deposits eggs in a mass; an egg mass contains from 500 to 3,000 eggs. Eggs may hatch immediately and juveniles may reinfect the root, or may overwinter and hatch next spring. The female dies soon after laying eggs.

The number of nematodes in a field varies throughout the year. Populations usually are lowest at planting and greatest at crop maturity. Root-knot nematodes have limited ability to survive in frozen soil. Populations decline in the winter when soils freeze. As much as 99 percent of the nematodes in a field may die during the winter. However, the population can increase rapidly during the summer. It is not unusual for populations to increase more than 100 times between planting and harvest. Because population densities can fluctuate greatly and detection procedures are less than 100 percent accurate, it is important to sample fields when the population densities are expected to be the highest, August to mid-September in Missouri.

Distribution of root-knot nematode and estimates of losses

Cotton losses due to root-knot nematodes in the United States are as variable as the distribution of the nematode. The Cotton Disease Council’s estimates that yield suppression due to nematodes ranges from 1.2 percent to 2.5 percent per year. However, losses may exceed 50 percent of the yield potential in severely affected fields.

Interactions with other pathogens

Root-knot nematodes are not uniformly distributed in soil; they occur in irregular patches. These patches may be small and limited in number, or they may be large and widely distributed. Depending on the nematode population, plants in these patches may be damaged and show symptoms ranging from mild to severe stunting and a reduced rate of development (Figure 1). Leaves on infected plants may wilt at midday more readily than healthy plants.

Root-knot nematodes cause visible galls, or knots, on roots (Figure 2). Swellings of the infected root tissues can be found on the cotton taproot and the lateral roots. The galls are easier to detect if cotton plants are carefully dug (not pulled) from the soil. 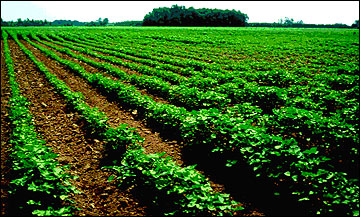 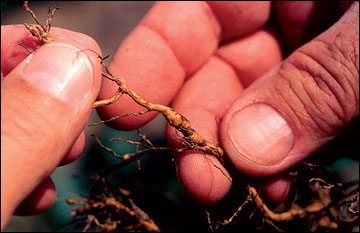 There are two strategies for managing cotton nematode problems: rotating cotton with resistant soybean cultivars, and using nematicides. An integrated approach that uses both methods usually is the most effective and profitable. Strategies that may be practical for one grower may not be feasible for another.

Nematicides. Chemical nematicides are widely used to control root-knot nematodes. Numerous studies show that when nematicides are used to control nematodes, yields increase significantly. Yield increases of more than 50 percent are common in severely infested fields. The objective for using chemical nematicides is to protect the seedling roots from nematodes for four to six weeks. By protecting the roots during early development, yield losses will be reduced substantially even though nematodes may penetrate the roots during the latter part of the season. Several nematicides labeled for use on cotton include soil fumigants such as Telone II, seed treatments such as Aeris and Avicta, and nonfumigants such as Temik. All pesticides should be used only in accordance with label instructions.

Nematode distribution in a field is generally irregular and uneven. Populations may be very high in a localized area of a field and low in the remainder of the field. Because irregular nematode distribution affects the accuracy of population density estimates, it is necessary to collect several composite samples from a single field. Good soil samples that accurately represent nematode populations are essential for prudent management decisions. Collecting several samples from each field may increase the cost of sampling, but it is more valuable because the estimate is more accurate and reliable. Nematode populations usually are low in the spring and build through the growing season to reach peak densities at harvest. Nematode populations are easier to detect when bolls begin to open than at any other time.

Samples should be collected from within the row because the nematodes are concentrated there. Generally, a sample should represent about 10 acres of similar soil type and should consist of at least 20 individual soil cores in that area. Soil probes, which are steel tubes about 1 inch in diameter, are commonly used to extract soil cores. Insert the probe 6 to 12 inches deep into the soil. Soil cores are collected in a bucket and thoroughly mixed. About a quart of mixed soil is then placed in a plastic bag and sealed to inhibit drying. Nematode samples require special care, because nematodes are living creatures. For example, if a sample dries or is placed in the sun, the nematodes will die. The laboratory information on a dried sample will not accurately reflect the field situation. A nematode sample should be handled like a carton of milk. It should be kept cool, but not frozen. During sample collection, it is important to keep the soil sample in a cool location, such as an ice chest with ice. The sample should be transported in a precooled ice chest to prevent overheating. Samples should be delivered to the diagnostic laboratory as soon as possible. Overnight delivery service should be used if feasible. For more information about sample collection visit SCN Diagnostics.