The corn earworm, Helicoverpa zea (Boddie), is a generalist feeder with at least 16 cultivated and numerous (more than 100) wild host plants. Other names given to this pest include cotton bollworm, soybean podworm, tomato fruitworm and vetchworm. This insect has a global distribution and is found throughout the continental United States.

The corn earworm overwinters as a pupa within an earthen cell two to four inches deep in the soil. Resident moths [buff-colored with irregular wing markings (Figure 1)] emerge in April and are later joined by migratory moths in June (timeline). First-generation moths mate and the females lay their eggs on both cultivated and wild host plants. Each female can produce 500 to 3,000 eggs, but the average is around 1,000. The white to cream-colored, dome-shaped eggs are individually laid near the terminals and fruit of its host plants. Reddish brown bands appear on the eggs before the larvae hatch (within 2 to 10 days). Small larvae are cream-colored but larger ones have variable coloration (pale green to rose to brown) and pale lateral stripes. Unlike other striped larvae with four abdominal prolegs, corn earworm larvae have numerous small, black spines along their back and sides. The larval stage of the corn earworm and the tobacco budworm, Heliothis virescens (F.), look very similar; however, corn earworm larvae lack an extra tooth on the inside of their mandibles. For the tobacco budworm, the extra tooth is at a right angle to the other teeth, like the thumb folded across the palm of the hand. A 10x hand lens is necessary to distinguish both the black spines on the corn earworm larvae and the presence or absence of the extra mandible tooth. Corn earworm larvae feed for two to four weeks and molt four to five times. Once a larva is full-grown, it crawls down the host plant and pupates in the soil. The next generation of moths emerges within the next 10 to 25 days. 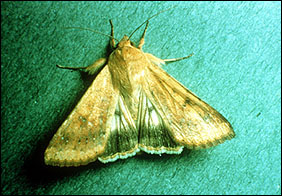 Corn
Corn is the preferred host of the corn earworm. First-generation larvae may feed within the tightly rolled leaves of whorl-stage corn. This damage causes numerous ragged holes to appear after the leaves unfurl. The larvae also deposit wet, tan to brown waste droppings (or frass) between the whorl and the base of the leaves. The feeding damage and frass are similar to that of the fall armyworm, Spodoptera frugiperda (Smith). Damage from second-generation larvae is more economically important because the larvae feed on corn kernels around the tip of the ear (Figure 2); whereas, both the European corn borer, Ostrinia nubilalis (Hübner), and fall armyworm feed along the sides of the ear below the tip. Both the ear damage and larval frass also permit secondary disease pathogens to infect corn kernels and further reduce grain quality and yield. One of these pathogens, Aspergillus flavus Link, produces alfatoxin that is poisonous to both humans and livestock. Third-generation corn earworms may attack late-planted corn, but these larvae are usually found on other host plants. 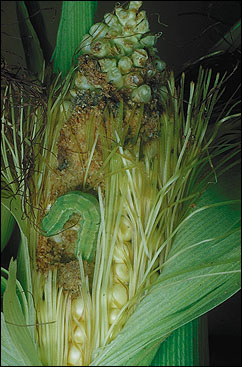 Cotton
The corn earworm, also known as the cotton bollworm, primarily attacks the terminals, squares, blooms and bolls of cotton. A female moth typically deposits her eggs on young terminals, square bracts and flowers (inside or outside). Initially, the small larvae tunnel into young terminal growth and squares. Terminal damage by small larvae can lead to excessive branching by the plant. Later, the larger larvae tunnel into squares and feed on the developing floral structures. These squares eventually turn yellow and fall to the ground. Larvae also can damage bolls and consume the entire contents of the boll (Figure 3). This damage is generally accompanied by semisolid, moist frass deposited by the larvae around the irregular-shaped entrance hole. Frequently, secondary pathogens infect damaged bolls and cause additional boll rot. During times of limited fruit supply and high larval populations, bollworm larvae may feed on older leaves. Overall, a single larva also may consume six to seven squares and two to three bolls before completing its growth. 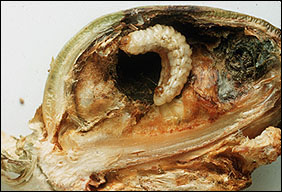 Grain sorghum
Late in the growing season, corn earworm larvae can be found feeding on the seeds and flower stems of sorghum. Plants are most vulnerable to injury during the bloom to milk stages, and corn earworm larvae can heavily damage seed heads (Figure 4). An average of one larva per seed head can reduce yields by 5 percent and two larvae per seed head can cause a 9-10 percent yield loss. 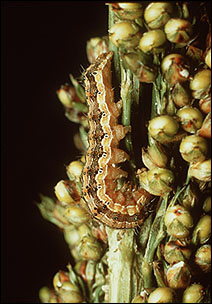 Soybeans
In southern Missouri, late-planted or double-cropped soybeans are most vulnerable to attack by the soybean podworm (same as corn earworm). Leaves, stems, flowers but especially pods and seeds (Figure 5) can be damaged by the third generation larvae. When soybean podworm infestations coincide with prebloom soybeans, damage is limited to the foliage and is of little economic importance; however, infestations during peak flowering to early pod fill stages can delay seed production and lower yields. 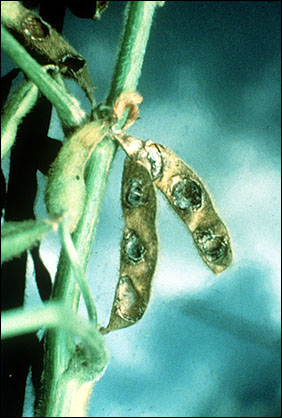 Corn
Corn earworm larvae usually feed at the ear tip. When disturbed they will either fight or curl into a C-shape.

Cotton
Closely examine the entire plant (terminal, squares, blooms, bolls) for cotton bollworm eggs and larvae. Cotton adjacent to corn fields or those with weedy field margins often receive the most intense egg-laying pressure. Generally, the biggest threat from bollworm infestations occurs when corn stops silking and begins to mature. Carefully examine 50 plants (five plants in each of 10 locations) and their fruiting structures (particularly underneath the bloom tags) per field for bollworm eggs, larvae, and feeding damage. Fields must be scouted one to two times each week until the last effective boll population matures.

Grain sorghum
Once sorghum begins to bloom, check fields every five days until the hard dough stage. Randomly sample five plants at each of 10 locations per field for corn earworm larvae by vigorously shaking the seed heads over a beat sheet or 5-gallon plastic bucket. This method helps to detect the smaller larvae (less than 1/4 inch in length) that are easily overlooked with visual examinations of the seed heads.

Soybeans
Fields should be scouted for soybean podworms once plants begin to flower. A beat sheet for detecting the larvae and visual examinations for pod damage are recommended sampling methods. At each of 10 locations per field, sample 6 row-feet with a beat sheet and visually examine five plants.

Corn
For field corn there is no recommended threshold in Missouri. Rescue insecticide treatments are economically impractical because of the numerous applications required to obtain effective control and prevent ear damage. Insecticide applications can be economically justified for sweet corn or late-maturing seed production fields. The threshold is an average of five corn earworm moths per night in pheromone traps when green silks are present in the field. Stop insecticide applications when 90 percent of the silks turn brown.

Cotton
MU's insecticide recommendations for cotton are when square or boll damage reaches 5-10 percent, or when 10 or more cotton bollworm eggs or larvae per 100 plants are present.

Grain sorghum
Insecticide application is recommended for sorghum when more than 75 percent of the plants are infested with corn earworm larvae (one or more larvae per seed head).

Soybeans
Once soybean plants start to flower, rescue insecticide applications are recommended when soybean podworm populations are more than one per row foot and 5 percent or more of the pods are damaged.