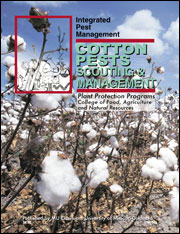 Upland cotton was domesticated from a subtropical, perennial plant in its native desert habitat. Now it is grown as an annual crop in Missouri and throughout the cotton-growing regions of the United States. An understanding of the cotton plant's growth patterns is important for timely management practices. Several factors are involved in optimal cotton production, including temperature, solar radiation, water and healthy root systems. Cotton requires a minimum temperature of 60 degrees Fahrenheit to grow; however, temperatures around 90 degrees Fahrenheit are considered ideal for growth and lint production. Sunlight is necessary to drive the plant's photosynthetic "factory" to produce sugars necessary for plant growth and fruit production (square to flower to boll). Strong, early root development is essential for the uptake of soil nutrients and water to support maximum fruit production later in the season (Figure 1).

To monitor plant development during the growing season, select five representative plants each week at 10 scouting locations in each field, and rate the plants' development according to the guidelines listed in Table 1. Heat units are calculated by adding together the daily maximum and minimum temperatures, dividing by two, and subtracting the base developmental temperature (60 degrees Fahrenheit). If the number calculated is negative, then round it off to zero. Seedling leaves or cotyledons are the first to emerge after planting. Cotyledons are borne on opposite sides of the main stem. Thereafter, the nodes (first to nth) above the cotyledons (zero node) will have a spiral, or alternate, arrangement around the main stem (Figure 2). The distance between nodes varies with seasonal growing conditions and the plant's growth stage.

Generally, the lower branches are vegetative and the number present depends on plant population densities. Depending on environmental conditions, the first fruiting branches will vary from the fifth to the eighth node. The developing fruit branch terminates in a square, but a second square and leaf develops at the base of the first one, and a new internode branch extends away from the first fruiting position. This creates a zigzag pattern of fruiting forms, leaves, and internodes. Cotton should begin squaring and flowering five and eight weeks, respectively, after planting. New fruiting branches should be initiated every three days during optimal growth periods. The weather and pests (diseases, insects and weeds) can disrupt normal plant development throughout the growing season. For example, seedling diseases can stunt plant growth and reduce plant population densities. Early-season fruit loss from plant bug infestations stimulates plants to produce more vegetative growth and less lint. Competition from weeds for nutrients, soil moisture and light reduces crop growth and yields.