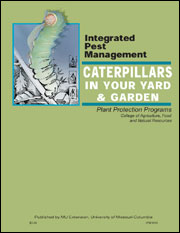 Some of the most easily observed insects in our backyards and gardens are caterpillars. Because they cannot fly or run away, we can approach and observe closely the behavior of these immature insects. Many children (and adults too) are intrigued by the discovery of a caterpillar of unusual size, color or body shape.

The purpose of this pictorial guide is to provide basic characteristics in identifying many of the caterpillars commonly encountered in our yards and gardens. This information would be particularly useful to those interested in butterfly gardening and conservation. Most of the caterpillar species described in this manual are not considered pests; however, some species may cause serious damage to many tree, shrub, flower and vegetable plants. MU Extension publications on the management of some of these pest species are referenced in the following pages. 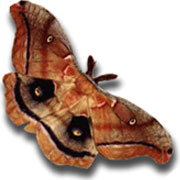 Most commonly encountered caterpillars are the immature stages of butterflies and moths, although the immature stages of some species of sawflies (primitive, nonstinging wasps) are also caterpillar-like in appearance. Such insects undergo a complete metamorphosis, with four general life stages: egg, larva, pupa and adult. The larva (or caterpillar) stage is often referred to as the "feeding" stage, a period in the insect's development when it is actively feeding and increasing its size and weight at a staggering rate. During this time of intense feeding activity, the caterpillar will go through a series of molts where its exoskeleton or integument is shed at periodic intervals. This allows the caterpillar to grow. Caterpillars will shed their exoskeleton three to nine (typically five) times. Not only will the size of the caterpillar increase between molts, but the caterpillar's color and appearance may also change (usually slightly, but sometimes drastically). At the final molt the caterpillar develops (pupates) into the nonfeeding, quiescent pupa or "transformation" stage from which the winged adult will eventually emerge. Most butterflies and moths survive the harsh winter months as a full-grown caterpillar or pupa, often within a tough silken cocoon that the caterpillar spins around itself before it pupates.

The overall body shape of a caterpillar is elongate and cylindrical with a well-developed head. The mouthparts are of the chewing type. Behind the head is the thorax, a three-segmented region (pro-, meso-, and meta-), each segment containing a pair of (true) legs. The abdomen is typically 10-segmented, with a pair of prolegs on segments 3, 4, 5, 6 and 10. However, the number of prolegs on sawfly caterpillars is always more than five pairs. Prolegs are found on the insect only during the caterpillar stage and are used to help the insect hold on to the host plant. Sometimes prominently visible on each side of the caterpillar's body, between the meso- and metathoracic and abdominal segments, are respiratory openings called spiracles. The surface of the caterpillar's body may be smooth or densely covered with setae (hairlike projections), or it may be covered with small to large spines or hornlike projections (Figure 1).

Figure 1
The parts of a caterpillar.