Attracting Barn Owls to Your Property

The barn owl (Tyto alba) is perhaps the rarest of six owl species that are year-round residents in Missouri. Other species more commonly observed are the great horned owl, the barred owl, the short-eared owl, the eastern screech owl and the long-eared owl. Several other species, such as snowy owls, may be seasonal visitors to the state.

Like other raptors or birds of prey — such as hawks, owls, eagles, falcons and vultures — barn owls are protected under the Migratory Bird Treaty Act. This law makes it illegal to handle, harm or harass these birds or their nests. Yet, even with the law in place, barn owl populations have declined across the Midwest due to habitat loss, intensive agricultural practices and illegal shooting. In Missouri, barn owls are a species of conservation concern.

Whether you live in an agriculture area or in suburban or urban community, owls are a valuable species to have on your property. Barn owls are among the most effective predators of all birds of prey, yet their value to agriculture is often underestimated. They eat large numbers of rodents such as voles, rats and mice that cause damage to agricultural crops, livestock feeds and farm buildings.

The barn owl's most common identifying marks are its bright white underbody and heart-shaped facial disk (Figures 1). Barn owls also have a short, square tail, unlike the longer, more rounded tail feathers of other owl species. They are about 16 inches long from the tip of the bill to the tip of the tail and have a wingspan of 3-1/2 to 4 feet. Unlike the hoot of other owls, the barn owl's call sounds more like a shrill or rasping hiss, such as a kschh or shish. 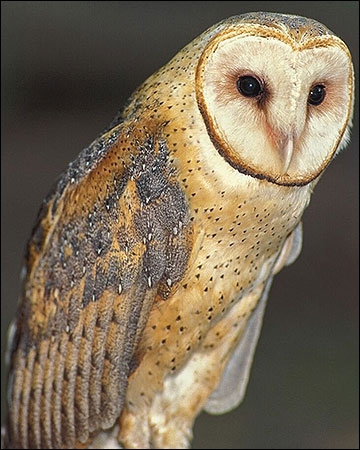 Figure 1
The barn owl's distinctive facial characteristics and coloration are key to identifying the species.

Barn owls prefer to nest in cavities in mature trees. Where no hollow trees are available, they have adapted to nesting in old barns, silos, elevators and other grain storage facilities (Figure 2). They will also use nest boxes that mimic natural cavities when these are placed in suitable habitats.

Barn owls nest year-round, with their peak nesting period being from April through July. They typically have a clutch of five to 10 white eggs that are incubated for about a month before hatching. Clutch size reflects the availability of prey, as well as the severity of the preceding winter. The male feeds the female during the incubation period; both brood the young. About seven weeks after hatching, the young leave the nest and forage with their parents for several days before leaving the area.

Although barn owls may live up to 10 years in the wild, more often their life expectancy is just one or two years. Especially during harsh winters, their mortality can be high. However, if the habitat is suitable and prey is plentiful, most young will survive. Because barn owls have relatively large broods, they can quickly repopulate an area.

Barn owls live in open woodlands, pastures and croplands and are attracted to areas with large rodent populations, such as where grain and forage crops are produced and near grain storage facilities. During the day, these nocturnal predators roost in trees or on farmsteads with old buildings or barns. They often wait until several hours after dark before hunting for food, particularly if great horned owls, one of their predators, are around.

Barn owls hunt by flying low over grasslands and open fields looking or listening for prey. They mainly eat mice, rats and voles, as well as shrews, bats, birds, lizards and insects. They do not eat domesticated fowl. 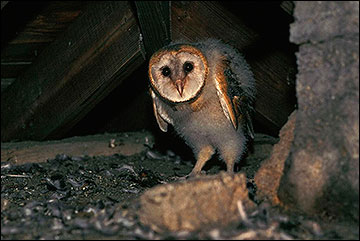 Barn owls will use well-built nest boxes near adequate food sources. They prefer to use nest boxes placed about 12 feet off the ground in dark, secluded areas. To best attract barn owls, these areas should be near grasslands, croplands and other open habitats. Where prey is abundant, barn owls will nest close to other birds. As barn owls are not particularly territorial, nest boxes can be placed a couple of hundred yards apart.

The two most important considerations of a nest box are that it be hidden from predators and large enough to accommodate barn owls' large broods. The barn owl nest box design and plans for building the box, available from the Missouri Department of Conservation website (see Resources section), is one of several that has proven successful in attracting barn owls (Figure 3).

Use a single sheet of 4-by-8-foot plywood to construct the box. Cut pieces according to the recommended size and begin by fastening the sides to the back and front pieces.

Then attach the bottom piece. If you use a top, put it on after you have installed the box so it is easier to nail. Use exterior plywood if the box will be exposed to weather. Space about nine drain holes, 1/4 to 1/2 inch in diameter, throughout the bottom. Cover the bottom with 1 to 2 inches of wood shavings, as barn owls place no nest material.

For greatest success in attracting barn owls to your property, place nest boxes about 12 feet high and in less trafficked areas. Place the opening away from prevailing winds. Barns, abandoned buildings and silos are also excellent places for nest boxes. If placing a box in a barn, nail the back of the box flat to the siding with the front facing into the barn. Secure the box to a brace or stud. You can also attach metal straps to the back of the box and bend them to hang the box in a barn or inside a silo.

You can also place nest boxes on large trees, but these may be at increased risk of predation by snakes, raccoons, opossums and great horned owls.

Nest boxes can also be mounted 16 feet high on a securely planted 4-by-4-inch pole. Predator guards or a sheet metal baffle should be placed 4 to 5 feet below the nest box. Pole-mounted boxes should be within 100 yards of large trees to provide suitable cover for young birds after they leave the nest. 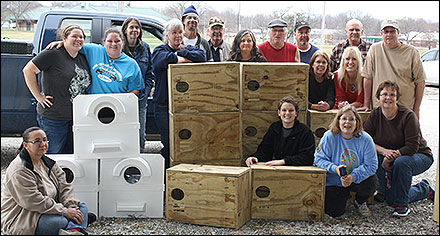 Barn owl nest boxes should be regularly cleaned and maintained. The best time to do this is during late fall and winter, which is when you are least likely to find a barn owl on the nest. Because barn owls nest at any time of year, it is important to be as quick and quiet as possible as you check nest boxes. Disturbing a female that is sitting on eggs will likely cause her to abandon or destroy the nest. If you do find a nesting female, close the box and defer cleaning and maintenance until the young have fledged.

To clean the box, remove all nest materials, feathers, pellets and other materials, and then spray the interior with a 2 percent bleach solution to disinfect the box. Do not use insecticides to control insects in nest boxes.

Barn owls are effective natural predators and can help keep rodent populations in check on farms and agricultural areas. Their presence can help reduce the need to use rodenticides, toxic baits; you may want to discontinue their use altogether if you are trying to attract barn owls to your property. Certain toxic baits do not break down quickly and can accumulate in the food chain, causing secondary poisoning to beneficial species such as owls and other birds of prey.

Barn owls, like other owl species, benefit farmsteads, agricultural ecosystems and urban environments alike. They are desirable predators that play an important role in controlling nuisance rodent populations. The lack of natural nesting cavities is a common limiting factor that property owners and managers can remedy by building and placing nest boxes in suitable habitats on their property. Contact the Missouri Department of Conservation or your MU Extension Center for more information on attracting barn owls and enhancing your property for a variety of wildlife species.