Attracting Hummingbirds to Your Property

The ruby-throated hummingbird (Archilochus colubris) is one of several species of hummingbird that frequent North America (Figure 1). The rufous hummingbird (Selasphorus rufus) and few other western species are casual migrants that can be seen in the western half of Missouri during late summer and fall, but the ruby-throat is the species most commonly observed across the state. Hummingbirds are neotropical migrants, which means they spend winters in Mexico and Central and South America but nest in more temperate climates.

They usually arrive in Missouri to nest from early to mid-April, but that can vary considerably from year to year, depending on weather. Ruby-throated hummingbird migration in Missouri typically peaks in early May and again in mid- to late September. Hummingbirds migrate when certain hormones are released, a process caused by changes in the length of the day. Hummingbird enthusiasts use a variety of means to report and track their first sightings of the year, which can be found online (see the Additional information section for more information on this website).

Hummingbirds are the smallest native bird in North America at only 3-1/2 inches long and a weight of less than 1/4 of an ounce. The rapid movement of their wings creates a humming sound, and they average 55 wing strokes per second. For their size, hummingbirds consume great amounts of high-calorie foods to sustain their high metabolism.

If you want to attract ruby-throated hummingbirds to your property, it helps to understand their biology and behavior, and to implement habitat management practices, such as providing native plants and supplemental food sources. They are attracted to plants and flowers that provide nectar, as well as artificial feeders that do the same. By landscaping with recommended plants and providing supplemental food sources, hummingbird enthusiasts and birdwatchers can attract and feed hummingbirds on their property. 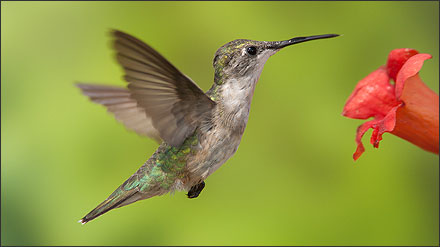 Figure 1
Male hummingbirds have iridescent red throats and are easily distinguishable from females and young birds, which have white throats.

Ruby-throated hummingbirds are attracted to habitats that have woodlands interspersed with open landscapes. Hummingbirds spend much of their day perching on tree limbs and shrubs and flying to nearby food sources, so trees provide important cover for nesting and resting. Landscapes with woodland habitats and open areas such as gardens, yards and meadows provide needed food sources of nectar and insects.

Water sources are also important for hummingbirds, particularly for bathing. They commonly fly through sprinklers or dip in shallow puddles. Birdbaths can be useful but should have shallow areas. Add a few rocks in the birdbath to create shallow and deep areas for birds to use. Wetlands, ponds and streams provide important water sources as well as an abundance of insects.

Male hummingbirds attract females with an elaborate courtship display shortly after arriving in the spring. The mating ritual typically involves the male flying and hovering over a female while she is perched on a branch. Males typically try to mate with several females. After mating, the female constructs the nest while males locate feeding areas. Males do not participate in nest-building or in raising chicks. It is common for hummingbirds to return to the same nest site year after year and either build upon the existing nest or construct a new nest at the same location.

A hummingbird clutch consists of two small eggs incubated by the female for 14 days before chicks emerge. Chicks are born blind and nearly featherless, but they develop feathers and grow quickly with help from a rich daily diet of nectar and protein. At 2-1/2 weeks of age, chicks are fully feathered and ready to fly. After three weeks, chicks are on their own and females might produce a second clutch of offspring in July.

Hummingbirds are unique in how they feed, using their long, retractable tongue to extract nectar from flower blossoms. Their natural diet includes flower nectar, tree sap and small insects and spiders on or near flowers. They can also capture small flying insects in the air. Although nectar is an important food source for them, hummingbirds rely on insects as a source of protein in their diet. Protein is especially important during times of nesting and feeding of young. Hummingbirds feed five to eight times every hour for 30 to 60 seconds at a time, and an adult female can consume up to 2,000 insects per day.

Planting herbaceous plants can provide a variety of flowers that bloom throughout the season to attract insects and create nectar. Hummingbirds will seek out nectar sources in your garden and around your home. Because of their high metabolism, hummingbirds must consume about half of their body weight daily. Hummingbirds get most of their daily intake of water from eating nectar or from water on leaf surfaces after rains.

Select a mixture of annual, perennial, shrub and tree species that have overlapping blooming seasons to ensure the availability of nectar sources throughout the growing season (Figure 2). Hummingbirds are more drawn to certain colored flowers, but they will feed from flowers of most colors. The flowers hummingbirds find most attractive are tubular ones in red, orange or pink. When planning your landscape, consider using native plant species rather than species introduced from other locations.

Table 1 provides some recommended species to help you get started selecting plants to attract humming-birds. These attractive plants provide a natural source of flower nectar and insects to eat. Some of the plants listed occur both as native and cultivated varieties and might only be native in certain regions of the state. However, many are available at nurseries or lawn and garden stores.

There are about 150 species of plants that are pollinated by hummingbirds. There are extensive lists of native plant species, including those most attractive to hummingbirds, available in publications listed in the Additional information section. 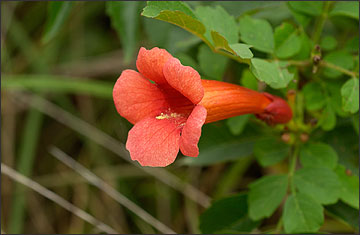 Figure 2
From top to bottom, trumpet creeper, butterfly weed and Indian pink are all good options for attracting hummingbirds. 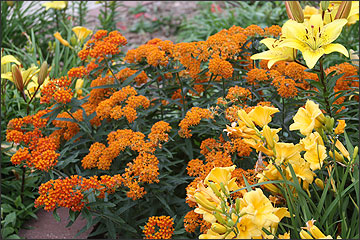 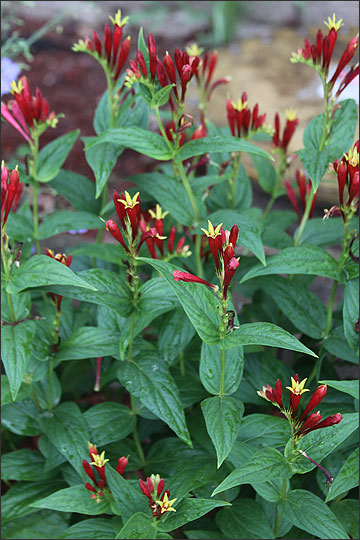 In addition to establishing plants that provide natural sources of nectar, you can use hummingbird feeders that dispense a sugar-water solution (Figure 3). Commercial artificial nectar can be purchased or easily made by mixing one part granulated white sugar with four parts water. Dissolve the sugar and fill the feeder with the solution. Keep leftover portions refrigerated until needed, and change the mix every few days or more often during hot weather. There is no need to use red food coloring or use commercially prepared solutions with red dye. Red coloring on the outside of a feeder is sufficient to attract hummingbirds. Do not use honey or artificial sweeteners as a replacement for sugar, as they might create health problems for the hummingbirds.

Clean a feeder by rinsing it with hot water, scrubbing it with a bottle brush to remove any mold and filling it with vinegar or soaking it in a solution of two ounces of household bleach mixed with one gallon of water. Rinse the feeder thoroughly before refilling.

Select a feeder that is easy to fill and clean. The best feeders have red coloring on the outside and grids or screens over feeding ports that help discourage bees. Hang feeders from tree branches or on a deck or porch, preferably in partial shade near flowers and out of the wind.

Put out feeders during the first week of April in southern Missouri and a week or two later in central or northern Missouri. Hummingbirds are territorial, and one dominant male can keep other males from using a particular feeder. You can attract more hummingbirds by providing multiple feeders in the area. Feeders should be spaced 10 to 15 feet apart to allow for greater viewing opportunities.

Continue feeding until hummingbirds migrate during the fall. This will not stop or delay their migration. Leaving feeders up through October provides food for other migrant hummingbirds that might be passing through. 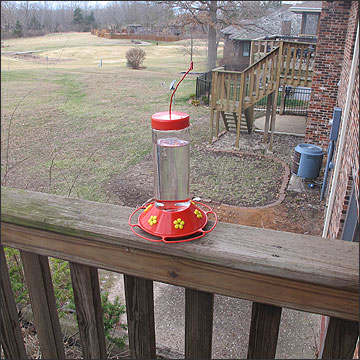 Figure 3
Put out feeders in different locations to help attract hummingbirds to your property and provide them with supplemental sources of food. This feeder has been filled and is ready to hang above the deck.