Muskrats (Ondatra zibethicus) are medium-sized, brown rodents with a thick body and short legs (Figure 1). An adult typically weighs about 2.5 pounds and is 22 to 25 inches long, including its 11-inch black tail. The vertically flattened tail, which is scaly and practically hairless, is used as a prop when the animal is on its hind feet and as an aid to swimming. The large, broad hind feet are partially webbed and well adapted for swimming. 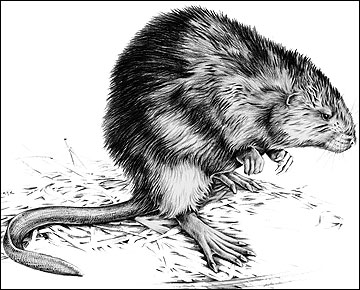 Figure 1. Muskrats are a common aquatic rodent species and inhabit many ponds and lakes in Missouri. (Charles W. Schwartz)

Muskrats have dense, silky, grayish underfur that is overlaid on the back and sides with glossy, dark-brown guard hairs. In Missouri, muskrats are classified as furbearers, and their harvest is governed by a regulated trapping season.

Muskrats are seldom found far from water and prefer the still or slow-moving water of marshes, ponds and streams. They are active throughout the year and, though usually nocturnal, may move during daylight hours.

The muskrat is primarily a herbivore, feeding mostly on the roots and stems of aquatic plants, but also eating foods such as legumes, grasses, grains, garden crops and apples if they grow near water. Muskrats also occasionally eat crayfish and freshwater mussels.

In Missouri, muskrats usually live in houses built of vegetation or in burrows dug into pond or stream banks. The houses and burrows have underwater entrances and above-water living chambers. Muskrats also commonly occupy abandoned beaver lodges or bank dens.

Muskrats breed from early spring until fall, giving birth to two to three litters a year. Each litter contains four to seven young. Although born naked and helpless, young muskrats grow rapidly and are independent at one month of age.

The feeding habits of muskrats may result in damage to agricultural or ornamental crops growing near water, but the principal cause for concern is the potential damage to ponds and lagoons and other earthen water-retaining structures. Damage occurs from muskrat burrowing and tunneling activities that may result in water leaks or in the loss of stored water.

Dealing with muskrats is much easier if done before a population has become established in an area, so watch for signs of muskrats and adopt control measures as soon as you find evidence of their presence.

The first step for controlling nuisance muskrats is to find where they are living. Walk near the edge of the water and look for underwater tunnels that lead to their dens. Den entrances are usually located a few inches to 3 feet below the water level. Signs that a muskrat den is nearby include muddy water, floating vegetation, and pellet-sized droppings on rocks along the shoreline.

Figure 2. The No. 110 body-grip trap is commonly used to control nuisance muskrats and works best when set underwater at bank den entrances.

Trapping is the most effective method for controlling muskrats that are causing damage. The most commonly used trap is the No. 110 body-gripping trap, which catches the muskrat across the head or body, killing it quickly (Figure 2). To be most effective, traps should be placed at underwater entrances that lead to all active bank dens. These areas can usually be seen if the water is clear. If the water is muddy, wade along the shoreline and feel for the entrances with your feet. Place the trap in the run as close as possible to the entrance so that a swimming muskrat entering or exiting the den will have to pass through it. Stake the trap to hold it in place. Position the trap trigger to one side so the trap will not spring shut until the muskrat is well into the trap.

If you have muskrats in your pond that are not causing serious problems, consider them a cash crop. They are easy to trap and skin, though be sure to do so only during the trapping season. A local trapper may be interested in taking the fur for profit if you do not wish to trap.

Riprap
Riprapping with coarse stone or gravel may discourage muskrats from digging and burrowing into the pond banks and dams. Apply the material in a layer about six inches thick, extending from one foot above to three feet below water level. This method of damage prevention also protects the pond banks and dams from wave action.

Figure 3. The potential for muskrat damage to pond dams can be greatly reduced if the dam is constructed according to recommended specifications.

Watch the dam closely for burrows, and repair any weak spots at once. Fixing a weak spot is relatively easy, but repairing the dam after a break has occurred is a big job.

Wire
One- or two-inch galvanized wire placed along the water’s edge will discourage muskrats from burrowing. Lay the wire flat against the banks, and fasten it down every few feet to keep it in place. The wire should extend from a foot above to at least three feet below the water level. The wire will eventually corrode, so this method is not recommended for ponds where people will be swimming.

Lowering the pond or lagoon water level several feet below normal can help control muskrats by making them more vulnerable to predators. Drawdowns leave bank den entrances above the water level and eliminate the steep bank that muskrats prefer for burrowing. Drawdowns are especially effective during the winter months.

Rule 4.130 of the Wildlife Code of Missouri allows landowners to protect their property from nuisance muskrats at any time of the year without a permit, but only by shooting or trapping.  To use other methods requires the written authorization of the director of the Missouri Department of Conservation.

Nuisance muskrats taken out of season may not be used, transported, sold or given away.  They must be reported to a conservation agent within 24 hours and disposed of in accordance with the agent’s instructions.

Other muskrat-trapping methods, including trapping under ice at bank dens, trapping near docks on lakes and ponds, and live-trapping, are described in Missouri’s Muskrats: A Guide to Damage Prevention and Control, published by the Missouri Department of Conservation (MDC). The Missouri Pond Handbook is also a useful reference that contains pond management and problem-solving information. Both publications are available on the MDC website, http://mdc.mo.gov.

Illustration by Charles W. Schwartz reprinted with permission from The Wild Mammals of Missouri, University of Missouri Press and Missouri Department of Conservation.