Armadillos in Missouri: Techniques to Prevent and Control Damage

Editor's note
A Web address was updated on this page and in the PDF on 1/28/15 but has not been changed in the printed version, so please check below.

Armadillos are becoming more common in portions of Missouri, particularly in the southern and central regions of the state. Their range has been expanding in the United States since the 1850s, when the armadillo moved into Texas from Mexico. Originally, the species was only found in South and Central America.

As populations continue to expand, the possibility of encounters with humans will increase (Figure 1). This guide provides general information on armadillos, their damage and their control. 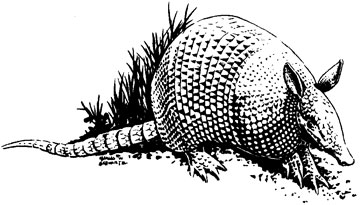 Armadillos are about the size of opossums. Their tracks are identified by three toe prints and sharp claw marks. The nine-banded armadillo (Dasypus novemcintus) is so named for the nine moveable rings of armor between its shoulder and its hip shields. Rings of armor also protect its long tail.

An understanding of the life history and habits of armadillos is helpful in developing an effective control program. Armadillos are mainly nocturnal, which means they are active at night. However, they occasionally move about during the day. They burrow in the ground and have extremely strong legs that are adapted for digging. They often root about in ground litter searching for insects, grubs and other invertebrates. Armadillos have poor eyesight and depend on their sense of smell to locate prey under the soil.

While searching for food, armadillos seem oblivious to anything else and may come in close contact to humans before becoming alarmed. When startled, they jump in the air, which greatly reduces their chances of surviving an encounter with a vehicle. Armadillos travel noisily through the woods — so noisily that deer hunters in the Ozarks are often surprised that the trophy buck they heard was actually an armadillo searching for food. Armadillos can run well and are good swimmers.

A female produces only one litter each year, usually in March or April, after a 150-day gestation period. Armadillos are unique in that they give birth to four young, all of the same sex. Inside the female, one egg becomes fertilized. This egg then divides into four eggs, each one exactly the same as the original. These eggs grow into four identical young that resemble miniature adults. The armadillo is the only mammal in Missouri that reproduces in this manner.

Armadillos do not tolerate freezing temperatures, which is the main reason they have not moved farther north. As winter arrives, their food supply becomes scarce and frozen ground conditions prevent them from digging in search of food. To escape the cold, armadillos retreat underground. However, they are unable to hibernate and will either freeze or starve to death in such conditions.

Armadillos usually dig a burrow 7 or 8 inches in diameter and up to 15 feet in length for shelter and for raising young. Burrows are often located in rock piles, around stumps and brush piles, and in dense woodlands. Armadillos often have several den locations in an area to use for escape.

Most armadillo damage occurs as a result of their rooting in lawns, golf courses, vegetable gardens and flower beds. Their rooting and burrowing behavior can also cause damage in pastures and affect livestock. As they search for food, they dig shallow holes in the ground. These shallow holes, 1 to 3 inches deep and 3 to 5 inches wide, are characteristic signs of armadillo activity. Armadillos also uproot flowers and other vegetation while searching for food. They also cause damage when they burrow under foundations, driveways and other structures.

Armadillos have been known to carry the bacterium associated with human leprosy (Mycobacterium leprae), but no conclusive evidence that humans can contract leprosy from contact with armadillos has been found. The Field Manual of Wildlife Diseases in the Southeastern United States summarizes what is known about the link between armadillos and leprosy:

Damage caused by armadillos is usually localized and is most often a nuisance rather than an economic loss. However, if a damage control program is warranted, here are a few techniques that may be helpful:

Armadillos can climb as well as burrow. Fencing or other barriers may exclude them under certain conditions. A fence slanted outward, with a portion buried in the ground, can be effective.

Because armadillos feed on invertebrates in the ground, eliminating that food source will often cause them to look elsewhere for food. However, ridding the soil and vegetation of all insects, worms and grubs is not practical and may be detrimental to the plants and other life forms in the area.

Removing debris and brushy areas from around your home may discourage armadillos. However, brushy areas are often valuable habitats for songbirds and other wildlife.

Armadillo damage is often localized to a particular area. If the damage is isolated to a garden area, an electric fence can be an effective form of control. A single strand 3 to 4 inches off the ground should be sufficient. However, be careful when placing an electric fence in areas where children play.

Armadillos can be captured in 10-by-10-by-32-inch live or box traps, such as Havahart, Tomahawk or homemade traps. The best locations to set traps are along pathways to armadillo burrows and along fences or other barriers where the animals may travel.

The best trap is one that can be opened at both ends. Its effectiveness is improved by using “wings” of 1-by-4-inch or 1-by-6-inch boards about 6 feet long to funnel the animal into the trap (Figure 2). This trap does not need baiting. If bait is desired, use overripe or spoiled fruit. Other baits that may be effective are fetid meats or mealworms.

Although live-trapped armadillos can be relocated to other areas, this practice can pose several problems and is generally not a good idea. 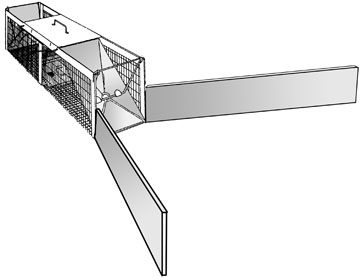 Figure 2. Live traps can be effective in catching armadillos, especially if boards are placed at the opening to direct the animals into the trap.

Spotlighting and shooting armadillos at night is an effective and selective method of control. However, this method requires constant vigilance to find the animals. In addition, local regulations on discharging firearms may prohibit this control method.