Robert A. Pierce II
Department of Fisheries and Wildlife Sciences

The woodchuck (Marmota monax) is one of Missouri's most abundant mammals. Often called a groundhog or whistle-pig, the woodchuck can be found in open pastures, woodlots, cultivated and fallow fields, and along railroad embankments, ditch banks, roadsides, fencerows and levees.

Woodchucks are known for building extensive underground burrow systems. This activity often provides refuge for other game and furbearing animals, such as rabbits, raccoons, skunks and foxes.

However, when woodchucks move from abandoned pastures and woodlots into cropland, gardens and orchards, the burrowing activity and feeding behavior can damage crops, interfere with farm operations and cause damage to equipment as well as pose hazards to livestock. 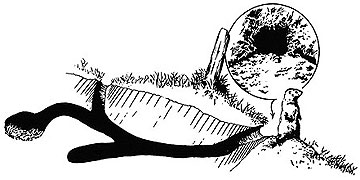 Woodchucks are members of the squirrel family. When these heavy-bodied rodents are surprised, they typically emit a loud, shrill whistle and dive into a burrow; hence the name whistle-pig. Adult woodchucks are stocky animals weighing between five and ten pounds. They have short, powerful legs, small ears, and a short, bushy tail. The body fur is long, coarse, and grizzled grayish brown in color. There are four clawed toes on each front foot and five toes on each hind foot. Like other rodents, they have a pair of large, chisel-like front teeth.

Good woodchuck habitat can be found throughout Missouri. Woodchucks prefer a mixture of open farmland, woods, fencerows and roadsides. They live in burrows usually located in fields, along roadsides, at the base of trees and around building foundations. Main entrances to burrows are easily identified by mounds of excavated dirt adjacent to a 10- to 12-inch-diameter hole. Burrow systems are extensive and each system has at least two entrances. Some secondary entrances are difficult to find because they are dug from below ground and do not have the mounds of dirt beside them (Figure 1). These entrances often serve as escape routes. Burrow systems may be five feet deep and 25 to 30 feet in total length.

Woodchucks use burrows for mating, hiding from predators and hibernating. One branch of the burrow system leads to a nest chamber containing dried grass. This dead-end nest chamber is sealed with soil during the winter and serves as a hibernation chamber.

Woodchucks are most active during early morning and late afternoon when they are feeding. They are vegetarians and eat a variety of grasses and broad-leafed weeds, including dandelions and plantains. They are particularly fond of legumes, including clover, alfalfa, vetch, peas and beans. Adults typically consume between 1 and 1-1/2 pounds of vegetation daily.

In late August and September, woodchucks have voracious appetites as they prepare to hibernate. This deep sleep, when body temperatures drop and heart rate slows to four beats per minute, usually begins in October and continues through February. They mate during March, shortly after emergence. In April four to five young are born. The young woodchucks remain in the den for about two months, leaving the nest in July to establish their own burrows and territories.

Woodchucks often construct two types of dens: winter dens and summer dens. Winter dens are usually located within wooded or brushy areas and serve as hibernation chambers, although occasionally they are used year-round. These dens typically have one opening, with the hibernation chamber situated below a tree or stump for protection against intruders. The winter den is abandoned by the woodchuck several weeks after they emerge from hibernation.

The animals then move into nearby grass or crop fields and construct their summer dens. Summer dens contain between two and five openings, but typically there is one main entrance and one or more escape holes.

The daily home range of woodchucks varies considerably. In favorable habitats such as a soybean field, woodchucks may forage only 20-30 yards from their home dens. In less favorable habitats such as woodlots, road edges and residential areas, the woodchuck may travel several hundred yards daily to reach a feeding area. Generally only one or two adult woodchucks will inhabit one acre, although occasionally there may be more. Woodchucks are territorial and usually defend their dens against other woodchucks except during breeding season, when the adult male and female will occupy the same den.

Control is most effective in the spring when active burrows are easily located, young woodchucks have not yet scattered, and there is less likelihood of damage to other wildlife. In late summer, fall and winter, other animals may use the burrows for protection.

The most effective types of woodchuck control include fencing, trapping, fumigation and shooting. Fencing may help reduce damage; however, woodchucks are excellent climbers and can easily crawl over fences. No poisons are registered for woodchuck control in Missouri. 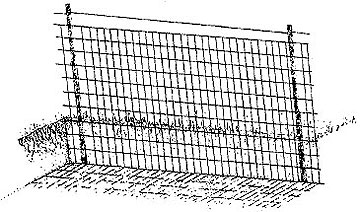 Figure 2
The buried portion of a mesh fence should be bent at 90 degrees about a foot below the surface to discourage digging near the fence.

Gardens and other small areas may be protected from woodchucks by erecting a fence of 2-inch by 4-inch mesh wire (Figure 2). The fence should extend at least two feet above the ground with an electrified strand on top. Because woodchucks are excellent diggers, it is necessary to sink the fencing into the ground. The buried portion of the fence should be bent at a 90-degree angle, 1 foot below the surface, with the bottom of the fence pointing away from the garden. This design discourages burrowing if it is started at the fence line. Electric fences can be used successfully; however, exercise caution before using high voltage electric fencing equipment where children or pets may be present.

Figure 3
Bait a wire-mesh live trap with apple slices or vegetables and place it in front of the burrow main entrance.

Live traps are effective in capturing woodchucks. Trapping is the best method to use near buildings or where fumigation may create a hazard.

Wire-meshed live traps can be set in the trail immediately in front of the burrow main entrance and baited with apple slices, carrots, lettuce or ample amounts of fresh peas (Figure 3). Cage traps should be 12" x 12" x 36" in size. It is important to adjust the trigger mechanism and trap properly so that it will fire with just the right amount of pressure. Some live traps have doors on either side of the trap, while others have only a single entrance. Many of these will also have a door on the top of the trap, which makes it easier to adjust and bait the trap. Either design will work. Guide logs, twigs or stones placed on either side of the trap will aid in funneling the animal toward the trap. A method of using live traps that works well is to place a properly adjusted trap 5 to 10 feet away from the den or burrow, facing toward the hole. Beginning at the den entrance, apply drops of woodchuck lure sparingly about 12 inches apart to, and into, the trap. Put a few drops of the lure on a large fresh cabbage leaf at the back of the trap. The use of the lure often improves the success of catching the groundhog. Lures are available from a variety of sources. It is a good idea to conceal the trap with canvas or grass. All traps should be checked in the morning or early evening, so that the captured animal may be dealt with in a humane manner.

Poisonous gas cartridges are one of the most commonly used methods of woodchuck control. When ignited and placed in the burrow system, these cartridges release carbon monoxide, killing the woodchuck. Because of potential fire hazard and gas accumulation in homes, never use a gas cartridge in burrows under homes, sheds or buildings or near dry grass or other combustible materials. Fumigation is most effective from February through April for two reasons:

Other factors determining the success of fumigation include the length and configuration of the burrow system, absorption of gas into soil cracks, and inadequate plugging of all burrow entrances.

Gas cartridges are safe if the user takes a few precautions. Never use a fumigant in a manner inconsistent with its labeling. Failure to comply with directions may subject you to severe federal and state penalties. Gas cartridges must be ignited by lighting a fuse. They are not bombs and will not explode if properly prepared and used. Follow these precautions before using a gas cartridge. Before lighting the fuse, ensure that the cartridge will pass easily into the burrow entrance. Always light the end of the fuse, never the cartridge directly. DO NOT hold a burning cartridge in your hand. Once the fuse has been lit, work quickly because burn time may be less than five seconds. Place the fuse end of the cartridge into the burrow first. Avoid prolonged breathing of smoke, and handle cartridges carefully because ignited gas cartridges can cause severe burns.

For successful control, treat burrows in the following manner:

For best results, burrows should be treated on cool, rainy days or during periods of inactivity on other days. Since vacant burrows may be reoccupied by individuals from adjoining areas, all fumigated burrows should be rechecked weekly for a month. Retreat burrows as necessary.

Woodchucks should not be viewed only as pests, as their burrows provide protection for a number of wildlife species. Abandoned burrows provide escape and protection for many kinds of animals including rabbits, raccoons, foxes, weasels and opossums. Many people derive enjoyment from observing these rodents, as they are one of the few species of large, wild mammals commonly observed during the day. Thus, woodchucks are an interesting part of our wildlife fauna and should be controlled only when they become troublesome. Woodchucks may be controlled throughout the year if they are damaging your property. However, be sure to contact the Missouri Department of Conservation or your MU Extension center before initiating a woodchuck damage control program. The Missouri Department of Conservation (MDC) provides statewide wildlife damage management services and technical assistance through the Private Lands Services Division and the Wildlife Damage Management Program. For more information, contact a wildlife damage biologist with the MDC or visit Private Land Assistance on the MDC website: http://mdc.mo.gov/.

The authors acknowledge assistance from the Animal and Plant Health Inspection Service - Wildlife Services of the U.S. Department of Agriculture in developing and reviewing this publication.

Illustrations by Charles W. Schwartz are reprinted with permission from The Wild Mammals of Missouri, University of Missouri Press.