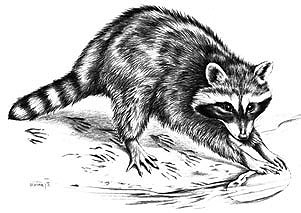 Raccoons, Procyon lotor, are found throughout most of the United States. Although raccoons are commonly found in wooded areas along rivers and streams, marshes or lakes, they have the ability to adapt and take advantage of new habitats. Like many animals they are opportunistic and seek a lifestyle that has the greatest reward for the least effort. Urban environments often present such opportunities, and raccoons have readily adapted. Missouri's raccoon population has increased significantly over the past decade. This increase has been particularly noticeable in urban and suburban areas of the state, where natural predators are few, artificial foods are abundant, and hunting and trapping are more restricted.

Raccoons are familiar to most of us and are one of the easiest of mammals to identify. They are grizzled gray in color and are distinguished by their bushy tail with alternating black or gray rings, and black mask across their face. The print of the hind foot faintly resembles that of a small child.

Most towns and cities in Missouri have raccoons living within city limits. Because raccoons are active at night (nocturnal), they are seldom seen. Of all the wild animals that have adapted to city life, raccoons probably have the potential to be the most destructive.

Raccoons cause problems when they lose their fear of humans and move into urban areas to live. Problems include feeding in garbage cans, establishing dens in chimneys and plugging them with nest material, tearing off shingles or facia boards to enter an attic or wall space, or causing damage to gardens and fruit trees. Raccoons also may carry fleas, ticks, lice, distemper, mange, and canine and feline parvovirus. Raccoons may also carry rabies, which is different from other rabies strains.

Caution
Raccoon rabies is extremely virulent and spreads very quickly. It is more dangerous to wildlife and people than the type that currently affects skunks and other animals in Missouri. House pets are especially vulnerable to rabies spread by raccoons because of the raccoon's habit of haunting chimneys, attics, porches and trash cans.

Raccoon feces may also contain the roundworm egg, Baylisacaris procyonis. Humans, especially children, that come in contact with raccoon feces containing this roundworm also can become infected. Clinical symptoms depend on the number of roundworm larvae present in the body and their location. If the larvae migrate to the eyes or brain, blindness or death can result.

Raccoons also cause problems in rural areas by raiding chicken coops and poultry houses. Damage to garden crops and fruit orchards are other common problems.

Adult raccoons in Missouri may weigh from 10 to 30 pounds. Most daily movements of raccoons are within a relatively small area called a "home range." Males normally have home ranges no larger than 2 to 3 square miles while female ranges do not exceed 1 to 2 square miles. The home range of juvenile raccoons are usually less than one square mile. These home ranges also become smaller as winter approaches. During extremely cold winter days, raccoons are not very active. Raccoons do not hibernate during the winter, but may sleep several days during these extremely cold periods. They are nocturnal and solitary except when breeding or caring for their young. Breeding usually occurs from January to March, and females mate only once a year. Usually less than half of yearling females will breed, while adult females normally breed each year.

After a gestation period of about 63 days, an average litter of 3 to 5 young are born in April or May. The young weigh about 2 ounces at birth, open their eyes at about 3 weeks, and are weaned at 2 to 4 months of age, around late summer. Some young may disperse in late fall, but all are driven away by the female before her next litter is born.

A female with young may attack if cornered, so caution should be exercised if a mother and young are encountered in an attic or other enclosed space. Pet raccoons may also attack humans and therefore should not be kept as pets.

Raccoons generally have short life spans. Fifty to seventy percent of all populations consist of raccoons under one year of age.

Raccoons are omnivorous and will eat either plants or animals, depending on what is available. Plant foods may include fruit, vegetables (especially sweet corn), or nuts. Animal foods may include grubs, worms, crickets, grasshoppers, large insects, crayfish, clams, frogs, fish, turtles, bird eggs and nestlings, and small mammals such as squirrels, rats or mice. In urban areas, raccoons may feed on dog or cat food, fruit on trees, garden vegetables, or trash can garbage.

Raccoons are protected furbearers in Missouri, with seasons established for hunting and trapping. However, under certain circumstances landowners can control damage caused by furbearers. Contact the Missouri Department of Conservation for information about these provisions before using any lethal control measures.

The first step in controlling any wildlife problem is to determine which animal(s) are causing the damage. Evidence of raccoon activity may include tipping over trash cans and scattering trash, tearing up shingles or facia boards to enter an attic or wall space, or plugging chimneys with nest material. Raccoons in a chimney or attic may whine, growl, or make other noises that indicate their presence.

Raccoons may damage gardens or fruit trees, as evidenced by remains of partially eaten fruit under or still on the tree. Raccoons usually pull over cornstalks or pull down ears, then partially husk the ears before eating the corn off the ear. Melons are damaged by digging a small hole in the melon and hollowing out the contents.

Raccoons can also kill chickens or other poultry, usually leaving distinctive signs. The heads of adult birds are usually bitten off and left some distance from the body. The crop and breast may be torn and chewed, the entrails sometimes eaten, and bits of flesh left near water. Eggs may be completely removed from nests or eaten on the spot with only the heavily cracked shell remaining.

Raccoon activity can be identified by the presence of their distinctive tracks around the damage site. The hindprint is 3-1/4 to 4-1/2 inches long, much longer than it is wide, and the foreprint is shorter, about 3 inches long, and about as wide as it is long. The average distance between prints of a walking raccoon is 14 inches, with the left hindfoot almost beside the right forefoot. Five toes and claws are visible on all feet. Skunk tracks are smaller, with the hindprint being 1-1/4 to 2 inches long, and the foreprint 1 to 1-3/4 inches long. Flour may be spread at damage sites to reveal tracks from activity during the night.

Once it has been determined that a raccoon is causing the problem, several measures can be taken to reduce the damage. These measures include habitat modification, exclusion, use of chemical repellents, and population reduction.

Raccoon problems may be alleviated by making the habitat, or the area around the site, less favorable to raccoons. Because raccoons have fairly large territories, a neighborhood or community-wide effort may be more successful than isolated control measures in urban areas. Removing potential sources of food, water, and shelter is the first step in eliminating the problem. This includes removing pet food and water during the night and keeping the yard cleaned up and woodpiles stacked neatly. Garbage cans should be tied down to a solid structure so they cannot be overturned, and lids should be tight fitting, tied or weighted down to deny access to garbage.

Excluding raccoons may be the most successful strategy to prevent or eliminate damage to buildings, poultry yards, and gardens. 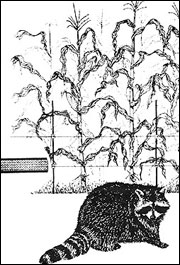 Figure 1
Two electrified wires, one 6 inches and the other 12 inches above the ground, mounted on insulated stakes or poles can be an effective deterrent around a garden.

There are no chemical repellents registered for controlling or repelling raccoons, although a variety of materials have been tested. Research suggests that mothballs (napthalene) or PDB crystals (paradichlorobenzene) may be effective at repelling mammals from enclosed spaces, such as chimneys, attics, wall spaces, or crawl spaces. Use of these chemicals may encourage raccoons to leave the area so that other exclusion techniques can be implemented.

The use of scare tactics or devices, such as propane cannons that make loud booms, pyrotechnics (fireworks), scarecrows, lights, or dogs, are not effective or practical in controlling raccoons, particularly in urban areas. Raccoons usually figure out that scare tactics pose no physical threat, and usually ignore them.

If no other control methods are effective, the problem animals may need to be removed from the area. There are no poisons or fumigants currently registered for raccoon control.

Trapping can be effective at removing the problem animals. Raccoons are relatively easy to catch in traps, but it takes a sturdy trap to hold one. Foothold traps may be used on rural sites but should never be used in an urban area. For urban areas and for homeowners with pets, a live or cage-type trap is usually the preferable alternative. Traps should be at least 12 inches wide by 12 inches high by 36 inches long and constructed with heavy materials. The trap may be baited with sardines, fish, meat, or fruit. Baiting with peanut butter on bread or fuit, vanilla extract on bread, or just fruit in an urban area should decrease the likelihood of catching a cat. The trap should be placed on a sheet of plywood or other hard surface, because raccoons will dig up all the grass or anything in reach after being trapped. Place the trap so that the back is against a tree, wall or other solid object. Lastly, the trap may have to be covered with burlap or a tight wire mesh to prevent animals from reaching through and stealing the bait.

Many homeowners prefer to release raccoons unharmed in a distant location, "where the animal can find a good home." However studies have shown that relocated raccoons tend to create problems in a new area. There is growing opposition to relocating raccoons and other wildlife because of the possibility of disease spreading from one population (urban) to another (rural). In addition, research indicates that a relocated raccoon may be forced out of the new area by the other raccoons already present. Because raccoons that are trapped and relocated may not have a good chance of survival, it is better to dispose of them. Local pest control companies, humane society or animal damage control services may be willing to dispose of the raccoon for you.

Contact your MU Extension center for more information on the prevention and control of raccoon damage.

The authors acknowledge assistance from the Animal and Plant Health Inspection Service - Wildlife Services of the U.S. Department of Agriculture in developing and reviewing this publication.

Illustrations by Charles W. Schwartz are reprinted with permission from The Wild Mammals of Missouri, University of Missouri Press.