Pruning and Care of Shade Trees

A healthy tree planted where it has room to grow to its natural size and form may need little or no pruning after it becomes established. Yearly pruning during the first few years after planting will often help the tree to become established and to develop a structure that is both strong and aesthetically pleasing. Occasional pruning may be required throughout the life of the tree to remove broken, dead or dying branches or those interfering with pedestrian or automobile traffic. However, once established, most shade trees need not be pruned on a regular schedule.

Pruning will not cure problems causing branches to die back. Causes of dieback may include insect or disease damage, poor soil drainage, drought stress, excessive shade or competition with other trees. The apparent invigorating effect of pruning is simply the result of forcing growth into a smaller number of buds. Excessive pruning may weaken a tree by removing too much leaf area and food reserves stored in the stem.

Planting time is a good time to correct minor structural problems a tree may have. Remove branches that are broken, rubbing or crossing each other. Cutting a few of the smallest branches back to the trunk will help direct growth into the terminal leader and stronger lateral branches, promoting the development of a well-spaced branch scaffold system. For plants dug from a nursery (not grown in a container), moderate thinning at planting time will also help compensate for the loss of roots due to digging. Removing more than about 20 percent of the branches may, however, reduce the tree's ability to produce food through photosynthesis, thereby slowing the establishment process. In most cases, it is best to avoid cutting off the terminal leader, as it may be difficult to restore a straight, central stem or trunk once the influence of the terminal bud has been removed. Occasionally it is necessary to remove competing leaders that form narrow branch angles.

One or two years after planting, start pruning the tree to improve its form. Select the main (scaffold) branches at this time. They should be well spaced along the main stem, smaller in diameter than the main stem, and distributed around the tree so that a full crown will develop. Properly selected scaffold branches have good vertical and radial spacing on the trunk (Figure 1).

Choose branches with wide-angle crotches (Figure 2). Narrow crotches will be weak and subject to storm damage as the tree grows. 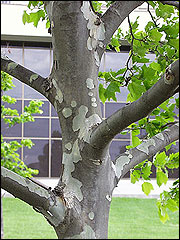 Figure 1
Scaffold branches should have good vertical as well as radial spacing.

The position of the tree limb on the trunk remains essentially the same throughout the life of the tree. The height of the lowest permanent branch will depend on the use underneath the tree. The height needed should be determined and allowed for when selecting the main branches. Since branches contribute to the development of the trunk, allowing lower branches to remain for a year or two makes a stronger tree. A young tree should be pruned up gradually so that the unbranched trunk is never more than one-third the total height of the tree. Thus, a tree should not be pruned up to provide six feet of clearance until it is about 18 feet tall. If it is necessary to limb up to 6 feet sooner than this for sidewalk clearance, the tree was planted too close to the sidewalk.

A regular pruning schedule should be developed to care for young trees. Eliminate undesirable branches while they are young. Many of the problems that require extensive repair work in old trees can be prevented by early corrective pruning. Look for and prune out the following problems: 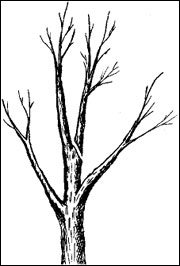 Mature trees may need occasional pruning for reasons already noted. However, working in large trees is dangerous. When pruning is needed, it is best to obtain the services of a competent arborist. Make sure that the arborist is insured against personal injury and property damage.

Large old trees are subject to sunscald if they are heavily top-pruned. The bark may be killed when it is suddenly exposed to full sunlight. To prevent sunscald, prune only part of the tree top in any one year. If it is necessary to remove a large limb, the trunk may be protected against sunscald by painting it with light colored water-base paint. Oil-base paints may damage the bark.

Topping or dehorning is sometimes done to old trees (Figure 4). Major branches are drastically cut back and all smaller ones are removed. Although topping has been a widespread practice, it is not recommended, and its use should be restricted to a few extreme cases. The shape of the tree will be ruined for several years, and the large wounds left in the topping operation will not heal properly. This leaves the tree more susceptible to disease, insect attack and storm damage. 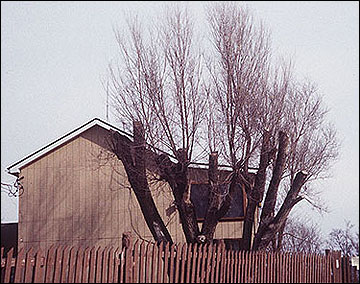 Figure 4
Topping hurts the appearance of a tree for several years and increases its vulnerability to disease, insects and storms.

The most common reasons for topping trees are to reduce the likelihood of damage to structures from wind-thrown branches or to reduce interference with power lines. In both cases, it is better to plant a tree not subject to wind damage in a place where it will not outgrow its bounds. However, if an existing tree needs to be reduced in size, this can be done by a technique called drop crotching. In this pruning system, branches are removed by cutting back to a point where they join with another branch or with the main trunk (Figure 3). Using this approach, the size of the tree can be reduced significantly without leaving stubs. In some cases, it may be best to remove the tree entirely and plant a more appropriate tree in its place.

When to prune
Pruning wounds will callus over faster if pruning is done in early spring before trees leaf out. Some trees, such as birch and maple, bleed excessively if pruned at that time. Bleeding does little harm to the trees, although it often causes concern to homeowners. Bleeding may be reduced by pruning in late spring when the trees are in full leaf. When necessary, trees may be pruned at any time of the year, but healing will not be as rapid as when pruning is done early in the spring. Extensive pruning in late summer or fall will remove nutrients stored in the branches before they can be translocated into the trunk and roots. Fall pruning may also stimulate late-season growth that may be susceptible to freezing injury.

How to prune
There is no standard method of pruning, but certain rules and procedures should be followed to obtain the best results. First, start at the top of the tree and work down. This makes it easier to shape the tree and saves time in clearing the tree of pruned branches that have become lodged. Make clean cuts as close to the remaining branch as possible. Dead branches should be cut back to a living crotch so that healthy tissue surrounds the final cut.

It is very important to avoid tearing the bark from the trunk when pruning. Small branches may be supported by hand to prevent tearing when they are cut off. Branches that are too large to be supported by hand must be removed by the three-step, stub-cut method to avoid tearing the bark (Figure 5). Make the first cut about one-third of the way through the underside of the branch, about a foot from the point of the final cut. Next, cut off the branch a few inches above the first cut. The final cut should be a "collar cut" made at about a 45-degree angle along the swollen area, or "branch collar," at the base of the branch. A collar cut makes a much smaller wound than a cut parallel (flush) with the trunk. Also, cutting a branch off flush with the trunk damages the collar, interfering with the tree's ability to seal off, or compartmentalize, the pruning wound by producing callus tissue (Figure 6). 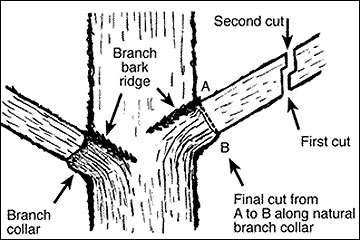 Figure 5
To avoid tearing the bark, prune large branches in three cuts. Make the first and second cuts about 12 inches from the trunk. Make the third cut near the branch collar at 45 degrees to the trunk.

Figure 6
Pruning at the branch collar encourages formation of a callus that seals the wound and protects the tree.

Mechanical injuries may be treated in two ways. If the bark is still intact and has not dried out, it may be possible to replace it over the wound. Trim the splintered edges, and nail the bark back in place. The wound will compartmentalize more quickly if it is shaded and kept moist. This can be done by placing damp sphagnum moss over the wound and covering it with polyethelene (plastic) sheeting. Seal the edges of the polyethelene to the tree to prevent water from getting under it. If water does get under the polyethelene, punch a hole in it to let the water drain out.

If the bark cannot be saved, remove all of the damaged bark and trim the wound so that it has smooth edges. Isolated islands of undamaged bark will not live and need to be removed.

One of the most common forms of mechanical damage is caused by lawnmowers bumping into the base of the tree. Trees are especially susceptible to this type of injury in the spring, when the bark is easily damaged. Care should be taken to avoid hitting the tree with a mower. Mulching reduces the liklihood of trunk damage from mowers and string trimmers. When this damage has occurred, it should be treated in the manner described above. 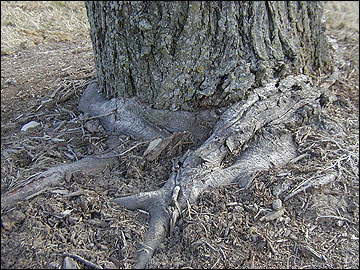 Figure 7
Girdling roots restrict the flow of sap. Poor growth or death of the tree may result unless they are removed.

Girdling roots
Trees are occasionally injured or killed by girdling roots (Figure 7). A girdling root is one that crosses one or more other roots and begins to encircle the trunk. Such a root arrangement most often results from planting container-grown trees with circling roots. It may also result when the quality of soil in a planting hole is better than that of the surrounding soil, discouraging outward root growth. Other possible causes of stem girdling roots are planting too deeply or piling mulch around the base of the trunk. As the roots grow, the flow of water and nutrients is restricted. In effect, the girdling root strangles the roots it crosses or even the trunk. They should be cut, leaving a large enough gap that the ends will not grow back together. It is best to eliminate girdling roots when the tree is still young. Cutting larger rooots on a mature tree may impair the tree's ability to take up water or it may make the tree unstable.

Other tree maintenance practices
If a large tree appears to be hollow, has a cracked trunk or exhibits extensive branch dieback, it is wise to consult a professional arborist to determine whether the tree represents a hazard and should therefore be removed. Bracing, cabling and protecting trees from lightning are all good tree maintenance practices. However, these procedures also should be done only by an experienced arborist.