Flowering trees add beauty and seasonal interest to the landscape. Many, including the popular flowering dogwood (Figure 1), have colorful or interesting fruits that may be edible or attractive to birds. 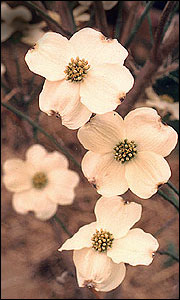 Figure 1
Flowering dogwood is the Missouri state tree. It is a good choice to plant in light shade.

Give high value to those trees that bear brightly colored or persistent fruits, in addition to showy flowers. A few trees that do not have spectacular flowers compensate by the great beauty or intense interest provided by fruits, pods, autumn leaves or uniquely colored summer foliage.

Whether a tree is considered a flowering tree is often a matter of opinion. All trees produce flowers, but whether we value them for the blossoms depends on how colorful, spectacular or unusual they are. Few large trees are especially noted for their flowers. While their flowers may be noticeable, the trees usually are valued more for other reasons. Some of these are therefore not listed in this publication.

Fruiting characteristics and location should be considered together. Proper location of soft-fruited trees and the season during which fruit falls or attracts birds are worth considering. Brief periods of inconvenience may occur when such trees drop fruit on paved surfaces such as patios, walks, driveways or game courts.

Responses to environment
Whether a flowering or fruiting tree lives up to its potential for health and beauty is largely dependent on its environment; soil, water, light and surrounding buildings and vegetation. Select flowering trees on the basis of their expected behavior under the prevailing growing conditions.

Few trees tolerate wet or very heavy soils, or very sandy or gravelly soils that tend to remain too dry. Nearly all, however, respond favorably to deep and fertile topsoil with good internal drainage. When the soil is inhospitable, improving the soil or adding good soil in raised beds helps ensure that trees will thrive and flower well.

Flowering and fruiting are greatly influenced by duration or intensity of sunlight. Most flowering trees are adapted to full sunlight and perform better away from large buildings or trees that cast dense shade during all or most of the day. Those preferring some shade flower best where there is partial shade all day, especially in the afternoon.

Most trees are variable in form, depending on the exposure. Planted in groups or in small openings, they ascend more rapidly and assume a form more upright than average. Trees planted in open areas will develop a broader crown and will not ascend to the same height as specimens of the same age that are more crowded.

Availability and adaptability
Our range of choices among flowering trees is largely determined by their general adaptability to the area. The climatic range over which a tree will thrive and flower well is usually reflected in the species or varieties offered in local retail nurseries and garden centers.

In the following list of recommended flowering trees, it is as impractical to list all the superior species and varieties as it is impossible for every nursery operator to stock all of them. Every retailer will have some desirable varieties not listed here. On the other hand, not all dealers will have all those listed. When your dealer does not have the plant you want, the dealer can usually obtain it for you if you are patient or may suggest a substitute.

Several trees that have some of the qualifications for flowering trees are not available in the nursery trade, or may have limited uses in the landscape.

A few of the outstanding native trees of Missouri are included in the list. These are not all readily available in the nursery trade at present. One reason for their appearance here is to encourage their preservation and incorporation into the landscape where they occur naturally. Another reason is to encourage using some of our highly desirable, hardy and well-adapted flowering trees in Missouri landscapes.

In the following descriptions, the term hardy refers only to the extent to which trees survive the lowest winter temperatures. Most of the trees listed are hardy statewide. Those limited to more southerly areas of Missouri are appropriately noted.

Heights of trees, in feet, are given for mature specimens that have grown on superior soils and within a favorable climatic range. In general, it takes many years to achieve such growth. In less favorable soils and climates, these heights may never be reached and the trees will grow more slowly.

Where fruits are indicated, an arbitrary size range is assigned. Fruits 3/8 inch or less in diameter are termed small. Between 3/8 inch and 3/4 inch, fruits are considered medium sized; large fruits are those larger than 3/4 inch. 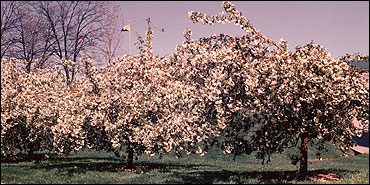 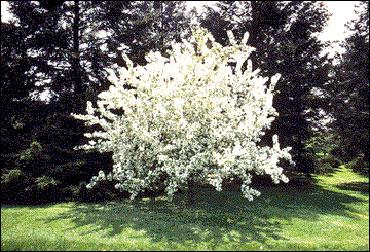 Crabapples are easily the most popular flowering trees in the Midwest. Not only are they splendid in bloom, they are prized for their attractive or persistent fruits that attract birds. There are more than 200 named cultivars and varieties of crabapple.

The intent to use crabapples in the landscape should be accompanied by the willingness to attend their maintenance if their full value as ornamentals is to be realized. Pruning is necessary to maintain their proper growth habit. Mice are a hazard in weedy or brushy areas. Apple scab, cedar apple rust and fire blight are all serious diseases of crabapples and need to be controlled on cultivars or varieties that are susceptible to them. Chewing and scale insects are sometimes a problem. Diseases can be prevented and insects controlled by following the spray schedule described for apple trees in MU publication G6010, Home Fruit Spray Schedules.

The crabapple varieties listed below are chosen primarily for disease resistance. Apple scab is one of the most serious diseases and causes defoliation in midsummer and sometimes again in late summer. There are other flowering crabapple varieties with good scab resistance, so do not consider this a complete listing. Except where noted, these varieties also have good resistance to the other major diseases of crabapples: fire blight, rust and mildew. Where any one of these three diseases may not be serious, the range of varieties selected becomes even broader. Sprays may be used to control all of these problems except perhaps fire blight, but for people wanting to avoid this operation and expense, the following varieties are worth considering.

Irregular but attractive spreading crown. Purplish pink small flowers in clusters before leaves. Foliage yellow in fall, of short duration. Clusters of dark brown pods in fall and winter. Specimens, masses, or naturalizing at edge of woods are best uses. Hardy, tolerant of a wide range of soils. Also is easier to blend into the landscape than the purplish pink color of the common species. 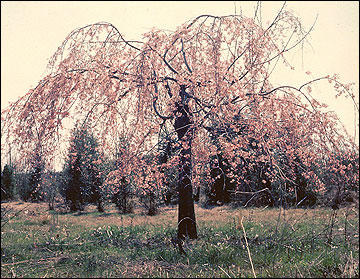 Among the many flowering cherries, only a few are both spectacular and reliable enough for use throughout Missouri. They serve best as specimens, accents, groups or in borders. Most cherries are slow growing. They respond well to good soil or soil improvement and tend to decline in vigor on poor or heavy soils.

Cherries will not tolerate wet soils. The fruits of most flowering cherries are hardly considered ornamental, but they are very attractive to birds. Attention must be given to pruning, fertilization and borer control.

The flowering dogwood (Figure 1) is unquestionably the most popular of our native flowering trees. It is the official state tree of Missouri.

Used as specimens, masses or naturalized under large trees. Prefers deep, moist but well-drained soil. Avoid deep planting and a hot, dry exposure. Improve tight or shallow soils and use a mulch. Needs water during drought. Old or injured specimens subject to borer damage. Not reliably hardy in northernmost parts of the state.

Although they produce flowers, the most popular plums are those that have reddish purple foliage. Trees rounded to upright, densely branching. Flowers double or single.

The plum cultivars with bright-colored foliage that have become popular and commonly available include 'Newport' and 'Thundercloud.' They are used more as specimens or accents. 'Atropurpurea' and 'Nigra' (Black Myrobalan plum) have darker foliage colors. Fruits, when present, are edible but are not ornamental. 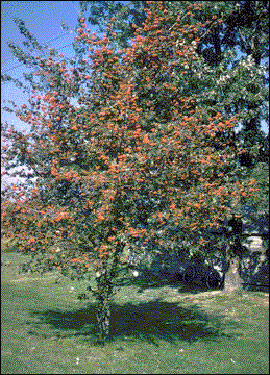 The Washington hawthorn produces white flowers in the spring and red-orange berries in the fall and early winter.

There are many species, varieties and cultivars of hawthorn. They are valued for profuse flowers, fruits and picturesque growth habit. Dense and thorny, with white flowers and red fruits; however, exceptions to these characteristics exist. Many native to North America. Grow well on all but wettest and poorest soils.

Success of hawthorn in Missouri is demonstrated by its natural occurrence in practically every county, and its adoption as the Missouri state flower. Best used as specimens. Fruits highly attractive to birds. Subject to borers, cedar-hawthorn rust, fire blight, leaf-eating insects. ‘Winter King' is much more resistant to rust than the more comonly planted Washington hawthorn. Annual maintenance beneficial. Somewhat difficult to transplant.

This small, upright growing tree reaches a height of about 25 feet. It produces terminal panicles of white flowers up to a foot long in June. It is a tidy tree with dark green foliage and, unlike its cousin the common lilac, Japanese tree lilac is not susceptible to lilac borer and powdery mildew. The flowers, though impressive in size, do not have a pleasant fragrance.

Best used as a specimen or lawn tree. Not recommended for northern Missouri. The more hardy variety "rosea" is preferred in central Missouri. Somewhat subject to ice breakage. Tolerates a wide range of soils, with superior tolerance to poor, dry or gravelly soils. Highly susceptible to mimosa webworm, a leaf-eating insect. Overplanted in many parts of the state. 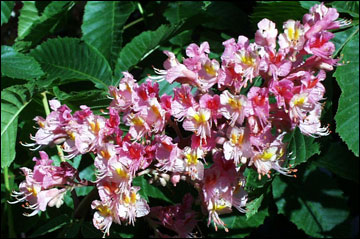 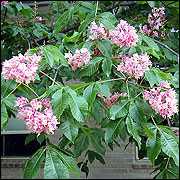 This unusual flowering tree is a hybrid between horsechestnut and the small, red flowering buckeye, Aesculus pavia. It is a rounded tree growing to about 35 feet, smaller than its horsechestnut parent. The most commonly planted cultivar, ‘Briotii', produces

10-inch-long panicles of pinkish red flowers with yellow throats in May that look dramatic against the large, glossy leaves. Red horsechestnut is susceptible to a leaf blotch fungus and should be planted in full sun with good air circulation to reduce the incidence of this disease. 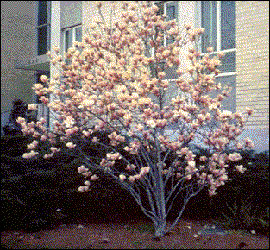 The Saucer magnolia provides splashes of spectacular color in the spring season.

Natural habit shrubby, rounded to spreading. Multiple stems but may be trained to a single trunk. Grows rather slowly to 25 feet but flowers at an early age. Cup-shaped flowers, white tinged with pink or purple, appear before leaves.

Best used as a specimen or lawn tree or small groups, or seen against a background of evergreens. Throughout their northern range, late spring frost occasionally will injure flowers. For best survival, transplant in spring. Some distinctive cultivars are:

Best used as a specimen or in small groups. May not be sufficiently hardy in northernmost Missouri. From mid-Missouri northward, avoid southern exposures to prevent early flowering and damage to flowers by late spring frosts. Best results, transplant in spring. Generally pest free. 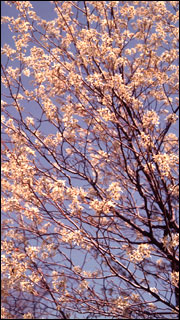 Serviceberry is one of the first trees to bloom each spring.

Upright in youth, oval to spreading with age. Growth rate slow to moderate, depending on site. Ultimate height may exceed 40 feet in best locations. Masses of small white flowers in nodding clusters in early spring, followed by maroon-purple, edible berries that are quickly eaten by birds. Fall foliage yellow, golden or red.

Use as a specimen or lawn tree, in border masses or as naturalistic groups. Prefers well drained sites; woodland or deep prairie soils. Occasionally damaged by an assortment of leaf-eating insects.