Asparagus is a high-yielding, early-season vegetable for home gardeners and commercial growers across Missouri. Asparagus (Asparagus officinalis), which is in the same family of vegetables as onion, is grown as a perennial vegetable in Missouri and can yield for 10 or more years. The asparagus plant is composed of ferns, a crown and a root system (Figure 1). The ferns are not true leaves but are stems that photosynthesize and transfer energy to the crown. The crown is a collection of rhizomes (modified stems) and lateral roots that initiate new ferns. Spears, which are the harvested portion of the asparagus plant, are immature ferns. Thus, if the spear is not harvested, it develops into a large fern, which manufactures and stores energy in the crown for next year’s crop. 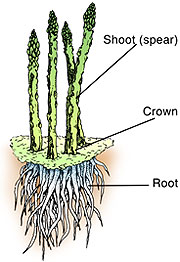 Preparing the asparagus bed
Because asparagus is a perennial vegetable, attention should be given to choosing the best planting site. Like most vegetables, asparagus will not tolerate wet, soggy soil. Choose a well-drained location, or use raised beds to promote drainage. Asparagus will perform best in sandy, light-textured soils. Do not rotate asparagus with vegetables such as onion, leeks, chives or garlic because they can transmit diseases to the asparagus planting. Choose a site with as few weeds as possible. Growing a cover crop during the summer (buckwheat) and the fall and winter (rye or wheat) the year before you wish to plant asparagus will suppress weed growth and increase organic matter in the soil. Take a soil sample the fall or spring before planting for nutrient analysis. The optimal pH for asparagus is 6.5 to 7.0; lime may need to be incorporated into the soil before planting. Before planting, broadcast and plow in fertilizer to supply about 75 pounds of nitrogen (1.7 pounds per 1,000 square feet), and 25 to 200 pounds (0.6 to 4.6 pounds per 1,000 square feet) of P2O5 and K2O per acre.

Choose a hybrid variety for optimum yield, quality and disease tolerance (Table 1). Many of the Jersey all-male varieties perform well in Missouri, including ‘Jersey Giant,’ ‘Jersey Knight’ and ‘Jersey Supreme.’ ‘Apollo,’ ‘Atlas’ and ‘UC 157 F1’ are also excellent hybrid varieties for warmer regions of the state. Open pollinated varieties such as ‘Mary Washington’ and ‘Viking’ are very good for home gardens but lack the vigor of the Jersey types for sustained commercial production.

Asparagus should be planted in the spring as early as the soil in the garden or field can be worked. In southern regions of Missouri, asparagus can usually be planted in late March or early April; in central and northern regions, early to mid-April.

Some varieties can be grown from seed for transplanting, but this method requires more time than using crowns. If seed is used, the seed is sown in plug trays in a greenhouse the fall before the asparagus is planted in the field. The following spring, the 3- to 4-month-old transplants are planted, but no harvest is conducted that year or the following year in order to increase crown vigor. In southern Missouri, transplants can be planted in either the spring (April) or fall (September).

If crowns are used, always purchase a healthy, 1-year-old crown from an inspected nursery. Crowns will differ in size. Separate crowns by size, and plant similar-sized crowns together to encourage uniform growth. If crowns cannot be planted immediately, store them in a refrigerator.

Make a 4- to 6-inch-deep furrow using a “middle buster” or garden hoe. Super phosphate fertilizer (0-46-0) can be banded in the furrow (0.7 pounds per 1,000 square feet) or an inch of compost can be applied before planting. Cover the fertilizer or mulch with an inch of soil, and space the crowns 12 to 18 inches apart in the furrow. If a variety produces large-diameter spears, you should reduce spacing within the row to decrease spear size. Each row should be no less than 5 feet apart so the ferns can close canopy and shade weeds during the summer. If rows are spaced too close together, spear size may be reduced. Cover the crowns with about 2 inches of soil, and as the ferns emerge and grow, gradually fill in the furrow through the summer (Figure 2). 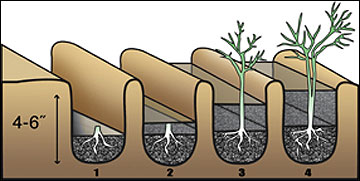 Figure 2
Healthy, one-year-old asparagus crowns should be planted 4 to 6 inches deep in a furrow.

White or blanched asparagus is very tender with a unique taste and is considered a rare delicacy by some. If the spear is protected from sunlight, it will not produce chlorophyll. To prevent sunlight exposure to the spear,  ridge soil or straw around the crown or place a black plastic cover over the rows.

Plants that are stressed by drought can become weak and susceptible to insect, disease and weed pressure. Growers should be prepared to irrigate new asparagus plantings for the first two or three seasons after establishment, and each year during the spring harvest season in case of a spring drought. Drought stress after harvest can reduce yields for the following season.

Weed control is the most challenging component of successful asparagus production. Asparagus is a poor competitor with weeds. On small acreages, very light cultivation with a hoe may be used to remove weeds, but avoid using a rototiller or any other tillage implement that can damage the crown, reduce yields and promote diseases. Organic mulches such as grass clippings, wood chips, straw/hay or compost can be applied 4 to 6 inches thick to suppress weeds.

Several herbicides are labeled for weed control in asparagus. Glyphosate (e.g., Round-up®) can be used as a contact spray to control winter annual and biennial weeds early in the spring before the spears emerge and after the last harvest. Consult MU Extension publication MX384, Midwest Vegetable Production Guide for Commercial Growers, for additional herbicides labeled for use on asparagus. Cover crops such as rye or wheat may be spring-seeded in row middles to suppress weeds. Common rock salt was once used to control shallow-rooted weeds in asparagus because asparagus is deep rooted and can tolerate some salt. This practice is no longer recommended because the salt can damage soil structure by creating a crust that impedes water infiltration.

Other potentially serious insect pests of asparagus include cutworms, grasshoppers and aphids. 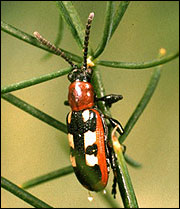 Selecting a site with good drainage and optimal pH will prevent many asparagus diseases. Crown rot, a potentially devastating disease, is caused by overharvesting, growing in acidic and waterlogged soils, and excessive pest pressure. Cercospora needle blight is often observed as reddish brown, elliptical lesions on the ferns. These lesions are followed by death of the foliage. For more information on asparagus disease management, consult MU Extension publication MX384, Midwest Vegetable Production Guide for Commercial Growers.

The yield of asparagus spears in the spring is directly related to the previous year’s fern growth. Asparagus can be harvested for a limited time (two weeks) the second year after planting crowns (three years from seed transplants). Overharvesting one year can weaken the plant and decrease yields the following year. Three years after planting the crowns, asparagus can be harvested for five to eight weeks. Each year during the first several years of production, marketable yields will increase if the planting is managed properly. Average yields for most commercial plantings in Missouri are 2,000 to 2,500 pounds per acre (46 to 57 pounds per 1,000 square feet).

Asparagus spears are best harvested by snapping them off by hand near ground level. Most growers prefer to snap the asparagus spears when they reach 7 to 9 inches in length in cool weather (less than 70 degrees F), or 5 to 7 inches in warmer weather (more than 70 degrees F), and the spear tip is tight. Snapping will break the spear cleanly at a tender point. Cutting with a knife is generally not recommended because it may spread diseases from plant to plant. Spears greater than 3/8 inch in diameter are graded as “large” while spears from 1/4 to 3/8 inch are graded as “small.” To preserve freshness, harvest during periods of low field heat (morning or evening). Spear fresh weight is greatest in the morning. Expect to harvest every one to three days as temperatures increase. Spring freezes will not harm the crowns or subsequent harvests but can damage emerging spears. Thus, emerged spears should be harvested before a predicted freeze.

Asparagus has a short shelf life and should be immersed in cold water (hydrocooled) after harvest and immediately refrigerated (36 degrees F) to maintain quality. Asparagus can be sold as 1/2- to 1-pound bunches. Normal spring harvest extends from April 10 to May 25 in the Missouri bootheel, April 14 to May 30 in southern Missouri, and April 20 to June 5 in northern Missouri, but harvest time can vary by about a week depending on temperature. Field harvesting should stop when the majority of spears are the diameter of a pencil (less than 3/8 inch).

After harvest, the asparagus planting should be fertilized with an additional 50 pounds of nitrogen per acre (1.2 pounds per 1,000 square feet) to stimulate summer and fall fern growth. Herbicides can be applied after harvest to control any weed growth. Frost will desiccate the ferns, and they can then be cut in late fall or early winter. Do not mow ferns in early fall while they are still green because this will reduce the following spring’s harvest. In northern Missouri, growers may mulch the crowns to protect them from low-temperature injury. The mulch can be raked to the row middles the following spring (early April), and spears will emerge for another harvest ­season.