Although researchers agree that birth weight is the most important measurable trait affecting calving difficulty, there is evidence that the size and shape of the pelvis also affect a heifer's ability to calve.

Calf mortality may be four to eight times greater in dystocia cases than in normal births. The majority of calf deaths occur within the first 24 hours following calving (58 percent), with 75 percent of the total occurring within the first week of life. Studies indicate that calf death loss due to dystocia accounts for the single largest perinatal and postnatal death loss category through the first 96 hours after birth.

A number of factors affect calving difficulty, including:

We also know that the single major cause of dystocia is a disproportion between size of the calf at birth (birth weight) and the cow's birth canal (pelvic area). Differences in pelvic area are generally due to pelvic height, with discrepancies between the dam and fetus more likely to occur for pelvic height and depth of calf chest than for width measures.

Heifer weight and age generally have a positive relationship to pelvic area, but weight is not always a good indicator. External dimensions such as width of hooks and length of rump are not good indicators of pelvic area or calving difficulty. For these reasons pelvic measurements can be a useful management tool to eliminate heifers with a higher potential for calving difficulty.

University of Nebraska researchers developed ratios that you may use to estimate deliverable calf size. You can divide total pelvic area prior to breeding by a ratio that is based on age and weight to estimate the amount of birth weight a heifer could accommodate as a 2-year-old without substantial difficulty.

Pelvic measurements can be obtained at the time of pregnancy exam, but a factor of 2.7 should be used to estimate calf birth weight of 18- to 19-month-old 800-pound heifers. Tables 1 and 2 provide estimates of the deliverable calf size a heifer can accommodate at first calving based on pelvic area at given weights and ages. Scientists at the University of Nebraska suggest that these ratios appear to be good indicators of dystocia and report an accuracy of nearly 80 percent.

Pelvic measurements can be taken prior to the first breeding season and combined with a reproductive tract examination. Pelvic measurements should be used in addition to, not in place of, selection for size, weight, and above all, fertility. Producers should be aware that selection for pelvic area is likely to result in increased size of the entire skeleton and animal. Increased skeletal size of the dam will be reflected in higher birth weight and dimensions of the calf.

Pelvic measurements, on the other hand, can be used to successfully identify abnormally small or abnormally shaped pelvises. These situations, if left unidentified, are often associated with extreme dystocia, resulting in Cesarean delivery and even death of the calf or cow. 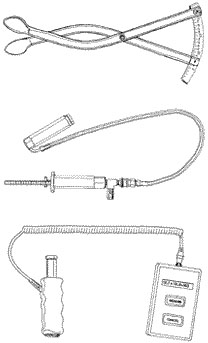 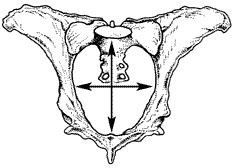 Measurements may be obtained by a veterinarian or an experienced producer. It is important that the person doing the measuring have a thorough understanding of the birth canal, pelvic structure, and reproductive tract. Practice and experience are necessary before accurate measurements can be obtained.

Calving ease will continue to be an important consideration as the industry produces fast-growing muscular progeny by terminal sires. These sires should be selected on measures of direct calving ease by using EPD (expected progeny difference) values for calving ease and birth weight.

To accommodate fairly heavy birth weights, scientists at Colorado State University recommend that you develop a cow herd that excels in maternal calving ease. Sires of replacement females should be selected to maintain cow size and milk production at levels compatible with available resources. In addition, cows should be selected for total maternal calving ease along with gestation length.

Research indicates that bigger is not necessarily better when one considers actual pelvic measurements. In other words, heifers with large pelvic measurements fail to calve more easily than average-sized heifers. However, heifers with abnormally small pelvises or abnormally shaped pelvises generally experience a higher than normal incidence of calving difficulty and should be identified and culled from the herd.

How to reduce calving difficulty (in ranked order):

This publication was adapted and revised from "Pelvic Measurements for Reducing Calving Difficulty," by Gene H. Deutscher, NebGuide G88-895, of the Nebraska Cooperative Extension Service, University of Nebraska Institute of Agriculture and Natural Resources. The tables contain Nebraska data.