Six to 10 percent of all calves born in beef cow herds in the U.S. die at or soon after birth. About half of those deaths are due to calving difficulty (dystocia). This multi-million dollar annual loss is second only to losses from failing to conceive.

Calving difficulty has received much more attention in recent years, primarily because of the mating of larger European breeds of bulls to British breeds of cow. Increased calving problems are also being encountered within purebred breeds, as genetically large bulls are often mated to cows of only average size.

The purpose of this guide is to acquaint cattle producers with calving management principles that will help minimize calf loss in their herds.

About 80 percent of all calves lost at birth are anatomically normal. Most of them die because of injuries or suffocation resulting from difficult or delayed parturition (calving). Factors contributing to calving problems fall into three main categories — calf effects, cow effects and fetal position at birth.

Calf effects
Heavy birth weights account for most of the problems related to the calf. Birth weights are influenced by breed of the sire, bull within a breed, sex of the calf, age of the cow and, to a slight degree, nutrition of the cow. Shape of the calf may also have a small effect on calving problems.

Cow effects
Several factors associated with the cow influence dystocia, the major ones being her age and pelvic size.

Age
First-calf heifers require more assistance in calving than do cows, because they are usually structurally smaller.

Pelvic area
Pelvic area (birth canal) increases as the female develops to maturity. Thus, a higher proportion of calving difficulty in 2- or 3-year-old cows is due to smaller pelvic openings. Heifers and cows with small pelvic areas are likely to require assistance at calving. However, even heifers with a large pelvic area may need help delivering large calves.

The calf's birth weight and cow's pelvic area have a combined effect on dystocia. Many heifers giving birth to calves weighing more than 80 pounds will have difficulty, even if they have large pelvic areas. Two-year-old heifers tend to have either a pelvis too small or a calf too large to allow them to deliver without assistance. Therefore, calving problems could be reduced by decreasing birth weight through bull selection and/or increasing pelvic area by selecting the larger, more growthy heifers.

Fetal position at birth
About 5 percent of the calves at birth are in abnormal positions, such as forelegs or head turned back, breech, rear end position, sideways or rotated, etc. (Figure 1). This requires the assistance of a veterinarian or an experienced herdsman to position the fetus correctly prior to delivery. If fetal position cannot be corrected, the veterinarian may have to perform a caesarean section. 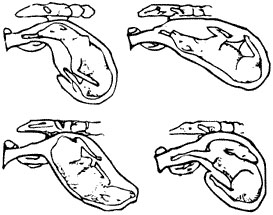 Figure 1
Abnormal positions of the calf for delivery

Normal calving can be divided into three general stages — preparatory, fetal expulsion and expulsion of the placenta or afterbirth. The time interval of each stage varies among types and breeds of cattle and among individuals of the same breed. Although the exact stimulus that initiates parturition is unknown, it does involve hormonal changes in both the cow and fetus as well as mechanical and neural stimulation in the uterus.

A general understanding of the birth process is important to proper calving assistance and, therefore, is presented here and summarized in Table 1.

Stage 1
Preparatory (2 to 6 hours). During pregnancy, the fetal calf is normally on its back. Just prior to labor, it rotates to an upright position with its forelegs and head pointed toward the birth canal (Figure 2). This position provides the least resistance during birth. Toward the end of gestation, the muscular lining of the dam's uterus increases in size, which aids in delivery. 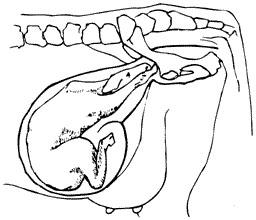 Figure 2
Normal positions of the calf just prior to delivery

In the preparatory stage, the cervix dilates and rhythmic contractions of the uterus begin. Initially, contractions occur at about 15-minute intervals. As labor progresses, they become more frequent until they occur every few minutes. These contractions begin at the back of the uterine horn and continue toward the cervix, forcing the fetus outward. Any unusual disturbance or stress during this period, such as excitement, may inhibit the contractions and delay calving.

At the end of the preparatory stage the cervix expands, allowing the uterus and vagina to become a continuous canal. A portion of the placenta (water sac) is forced into the pelvis and aids in the dilation of the cervix. This water sac usually ruptures and the membranes hang from the vulva until Stage 2.

Stage 2
Delivery (1 to 2 hours, may be longer in heifer). This stage begins when the fetus enters the birth canal and usually occurs while the cow is lying down. Uterine contractions are now about every 2 minutes and are accompanied by voluntary contractions of the diaphragm and abdominal muscles.

Surrounded by membranes, the calf's forelegs and nose now protrude from the vulva. After the nose is exposed, the dam exerts maximum straining to push the shoulders and chest through the pelvic girdle. Once the shoulders have passed, the abdominal muscles of the calf relax and its hips and hind legs extend back to permit easier passage of the hip region.

The calf is normally born free of fetal membranes (placenta), because they remain attached to the cotyledons or "buttons" of the uterus. This ensures an oxygen supply for the calf during birth. Upon passage through the vulva, the umbilical cord generally breaks, respiration begins, filling the lungs with air and causing the lungs to become functional.

Delivery normally is completed in one hour or less in mature cows. Special assistance is warranted if this stage goes beyond 2 to 3 hours. First-calf heifers can take 1 to 2 hours, or longer. Proper judgement should be used so that assistance is neither too hasty, nor too slow.

Stage 3
Cleaning (2 to 8 hours). The caruncleocotyledon, or button attachment between the uterus and placenta, relaxes and separates after parturition. The placenta is then expelled by continued uterine contractions. Cows normally expel the placenta within 2 to 8 hours.

Normal delivery in cattle should be completed within 2 hours after the water sac appears. If prolonged, the calf may be born dead or in a weakened condition. Since timing is vital to providing proper assistance, frequent observations are a must. Assisted deliveries should not be attempted without proper preparation of facilities and equipment. A clean, well-lighted maternity pen and clean pulling chains and equipment are desirable to reduce bacterial contamination.

Check with your veterinarian for advice on when to assist the cow alone and when to call him. Since cervical dilation is completed in Stage 2, assistance can be given too early. However, since final dilation is quite rapid, assistance is often given too late, which is much more serious.

Cleanliness cannot be overemphasized. Introduction of bacteria by equipment or arms of the person assisting with the calving may reduce fertility of the cow by delaying return to estrus and lowering conception. Equipment needs are two clean buckets, soap (for cleaning the cow), disinfectant, obstetrical lubricant, paper towels, calving chains and handles and plastic sleeves. Have water in both buckets — disinfectant is added to the second bucket. Place the calving chains and handles in the disinfectant solution.

Restrain the cow with head catch or halter. Tie the tail with light twine to the neck of the cow. Scrub the perineal area (around the anus and vulva) and the tail with soapy water. Pour water from the bucket to rinse the area. Do not dip dirty towels back into the bucket. When the area is clean, dry with paper towels. Use the remainder of the water in the first bucket to wash your hands and arms. If possible use plastic sleeves on initial examination. This may prevent contact with abortion-causing organisms that can infect humans. Apply an obstetrical lubricant to the sleeves. If extensive manipulation of the fetus is needed, the gloves may be removed since they tear easily.

Once delivered, clear any mucus from the calf's mouth and throat with your hand. Then, if necessary, stimulate the calf to breathe by either rubbing it briskly, tickling the inside of the nostril with a straw or slapping it with the flat of the hand.

Artificial respiration can be applied to the calf as follows: place a short section of garden hose into one nostril, hold mouth and nostrils shut so air enters and leaves only through the hose, then alternately blow into the hose and allow expiration of air. Repeat at 5- to 7-second intervals until the calf begins to breathe.

Another method is to alternate pressure and release on the rib cage. Commercial respirators are also available and may be a wise investment in larger herds.

Uterine prolapse
This is an inversion of the uterus that can occur when a partial vacuum is formed in the uterus. It is sometimes caused by pulling the calf too rapidly and may result in death of the cow if not treated promptly and correctly. Encouraging the cow to stand soon after delivery will reduce the chances of a prolapse.

Always contact a veterinarian for treatment and necessary drugs. Cull heifers or cows that prolapse because of the probability of it happening again.

Retained placenta
The placental membranes are normally expelled within 2 to 8 hours after birth. Occasionally, however, they fail to separate from the uterine attachment. This condition may pose a health threat to the cow and cause problems in rebreeding. Not all reasons for retained placentas are known, but high incidence may indicate a disease problem. They commonly accompany difficult births, multiple births and short gestations.

There are differing opinions as to the best treatment for retained placentas. Research has shown that manual removal can cause complications that would not have happened otherwise. For cows with no signs of abnormal vaginal discharges, good appetite and good milk production, no treatment may be best of all. If antibiotics are to be placed in the uterus, care must be taken to prevent introduction of bacteria through contaminated instruments or equipment. Boluses may reduce fertility of the cow. Antibiotics by injection or intrauterine application requires attention to residue avoidance in the sale of the milk or animal for food.

Consult with your veterinarian for further information or assistance.