Bobwhite quail, cottontail rabbits and many songbird species thrive in areas composed of native grasses, forbs, weeds and small shrubs. These early successional plant communities provide critical areas for nesting, brood rearing and escaping from predators. They also provide wildlife with food in the form of insects and seed-producing plants. Many wildlife species dependent on early successional vegetation will respond to habitat management practices that create food and cover around crop fields. According to research, more than 150 wildlife species in Missouri prefer this type of edge habitat.

The areas around the perimeter of select crop fields, the field borders, were managed to provide brood-rearing and escape cover beneficial for bobwhites. Field borders are generally defined as the area of vegetation — including grasses, forbs and legumes — that is established along edges of crop fields to provide natural food and cover for wildlife. Field borders also support beneficial insects that may reduce pest insects in crops. Through the use of conservation practices, these low-yield portions of the field can also be made to benefit wildlife and to help reduce soil erosion and protect water quality.

Research has shown that managing field borders can provide agronomic and economic benefits. Field borders next to mature woodlands may suffer yield reductions of over 30 percent, making these areas unprofitable to plant, fertilize, treat with pesticides and harvest. Precision farming techniques indicate that the outer rows of crop fields that are next to mature trees are the least productive areas of the field due to shading and competition from the adjacent woodland (Figure 11). Not only is yield lower in the outer rows, but crop growth is also stunted (Figure 12).

In addition, many wildlife species use dense shrubby cover daily. However, this important cover is lacking when field borders are absent or consist of abrupt changes from crop to grass or mature woodlands (Figure 13). 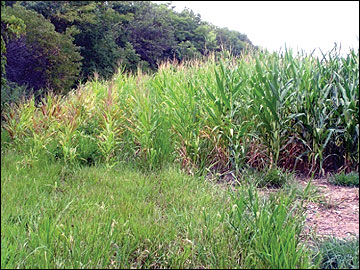 Figure 11. Rows of corn adjacent to mature trees do not typically produce a high yield, making fertilizer applications and other agronomic practices uneconomical. 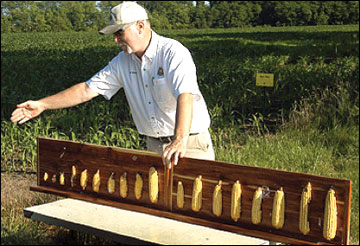 Figure 12. Outer rows of corn next to mature trees are the least productive areas of the field, as depicted by the average size of the ears. Note how the yield increases (left to right) in rows that are farther from the mature trees. 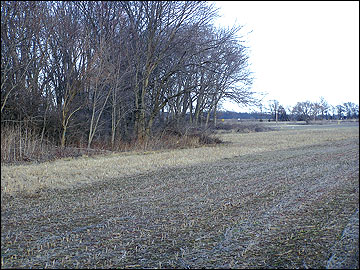 Figure 13. Locations for establishing a herbaceous field border are identified next to woodland. Note the lack of a transition zone or edge habitat between the woodland and crop field.

Edge feathering was done in strategic locations where mature trees and woodlands were next to crop fields or herbaceous field borders. This practice was implemented to create a transition zone of plant diversity between crop fields and the woodland habitat and provided protective escape cover (Figure 14).

A 1,500-foot woodland border was identified for edge feathering. About 80 percent of the trees were cut, leaving only those that were next to the stream to prevent soil erosion and maintain stream bank stability (Figure 15).

Three techniques were used to implement the edge-feathering practices and treatments (Figure 16): 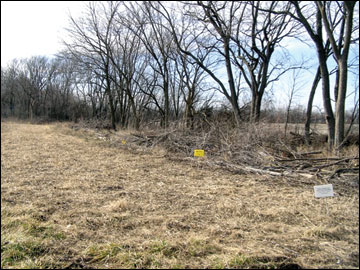 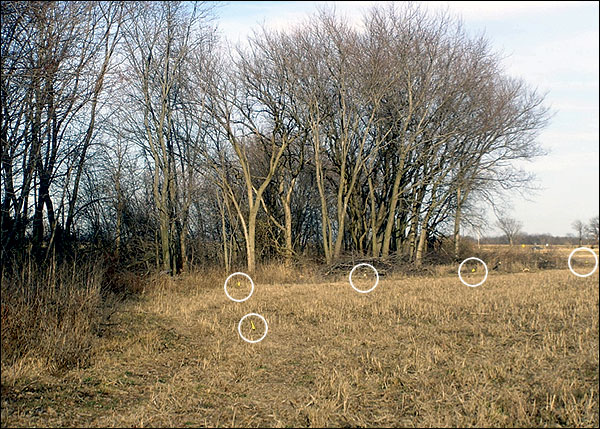 Figure 15. This is part of the area in which edge-feathering practices were implemented. The flags (circled) identified areas in which an adjacent field border would be established. 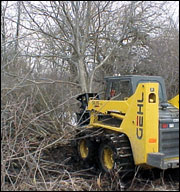 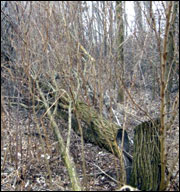 Figure 16. Certain unmerchantable trees were selected to be cut during the edge-feathering practice. (Left to right, top to bottom) A tree shear was used to open the stand, and some trees were hinge-cut and left to provide improved escape cover, resulting in the edge-feathered border shown. 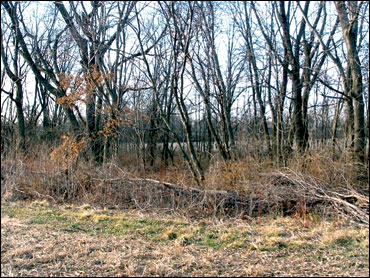 Field borders around crops. Herbaceous field borders should be 30 to 60 feet wide to be most beneficial for wildlife. Field borders can be created around row crops that are next to woodlands, pastures or other crop fields. At the MU BREC, CP33 field borders were established at 30-, 60- and 120-foot widths next to a mature stand of trees using a standard CP33 mix containing a 3-to-1 ratio of forbs to native warm-season grass species. (See the USDA NRCS publication Habitat Buffers for Upland Birds listed under Additional information.)

Figure 17 shows the planting techniques used and the vegetative response to implementation of field border habitats around crop fields. Table 2 lists the mix of the two species of native warm-season grasses and 10 species of forbs used in the herbaceous field borders.

Field borders beside a woody edge. Establishment of the CP33 mix adjacent to a woody edge that had been edge feathered provided excellent brood-rearing and escape cover with an immediate emergence of forbs and annual weeds during the first year (Figure 18). In following years, the amount of little bluestem and side oats gramma increased. Within two years of planting, the mix provided excellent nesting and brood-rearing habitat for birds and provided food and cover for small mammals. Numerous species of insect pollinators also thrive in these plant communities. Species of bees, beetles, butterflies and flies are important for carrying pollen from one plant to another as they collect nectar and, in doing so, help pollinate over 75 percent of flowering plants and nearly 75 percent of crops (Figure 18).

By the third year, tall fescue began to spread into the area. Controlling it required a postemergent grass herbicide application during the fall when the warm-season grasses were dormant.

The Food and Agricultural Policy Research Institute (FAPRI) at MU has conducted studies to estimate the net economic benefits of enrolling crop acres in the CP33 conservation reserve program. FAPRI obtained information from groups of Missouri producers for real-world estimates of key variables such as enrolled field border configurations, yields with and without field borders, program payments and costs of production. Specific types of farm businesses were then simulated for 10 years into the future under outlook scenarios. The FAPRI study did not attempt to estimate any benefits from improved wildlife habitat, such as recreational value. Although the net benefits were not positive for all scenarios, the simulations generally showed that, of the farm types studied (corn-soybean-wheat rotations), program payments would likely offset all of the foregone returns from crops, even with projections of historically high crop prices.

Enrolling acres is more likely to pay where inefficient crop production exists due to any combination of low yields or high costs relative to prices. Farms with high-valued output relative to costs on field edges are less likely to benefit. Farmers indicate that corn and soybean yields suffer more than wheat yields, perhaps due to the dates of maturity. Thus, farmers have less financial incentive to place borders on the edges of wheat fields. 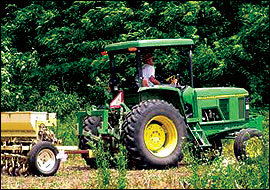 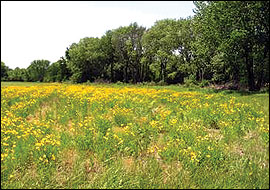 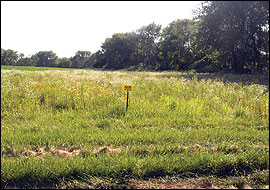 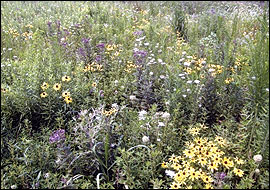 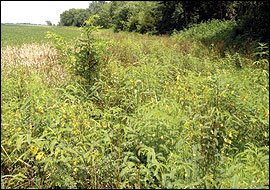 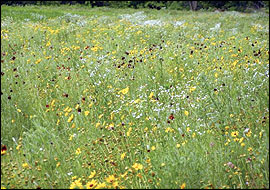 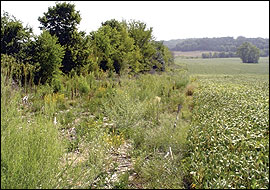 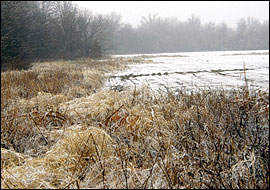 Figure 17. (Left to right, top to bottom) Herbaceous field borders using mixtures of native warm-season grasses with forbs and legumes were established using a native plant no-till drill during the spring. Note the forb response and increased plant diversity that occurred during the second and third year after establishment. Ragweeds and partridge pea were also common in the field borders. These areas provided important nesting and brood-rearing cover for bobwhite quail and important food and cover for wildlife during heavy winter snows and ice storms. 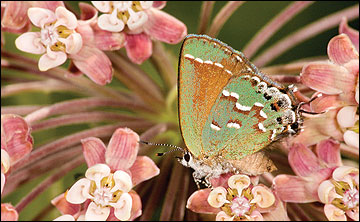 Figure 18. Pollinators such as the juniper hairstreak and bumblebee benefit from herbaceous field borders, and row crops benefit from their pollinating activity. (Donna Brunet photos, http://donnabrunet.com/) 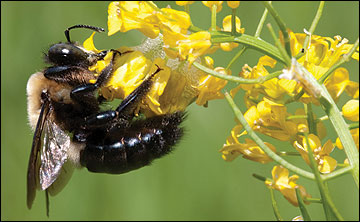 Many agricultural fields in Missouri contain natural swales and depressions that concentrate water flow after rainfall. Grass waterways, sometimes called “filter strips,” are areas of herbaceous vegetation that are established between crop fields, generally on the down slope margin of a field, to reduce water runoff and nonpoint source pollution (that is, pollution such as fertilizer runoff collected by the water from multiple sources along its path).

These areas can be planted to reduce the flow rate of surface water and provide many conservation benefits, including preventing soil erosion, reducing herbicide runoff from fields and serving as buffers next to streams to protect water quality and aquatic habitat and enhance habitats for wildlife and beneficial insects (Figure 19).

At the MU BREC, a grass waterway diversion channel, or filter strip, was planted to a variety of grass-forb combinations as an alternative to tall fescue for determining which mixtures provided soil and wildlife conservation benefits (Table 3). Soil tests were conducted, and the area was fertilized based on soil test recommendations. The establishment and growth characteristics of the various mixtures were observed throughout the year. Mixtures and seedings that contained Virginia wildrye (Cuivre) established quickly, and their growth was equal or superior to tall fescue, offering an excellent alternative to tall fescue as a predominant planting in a grass waterway diversion channel.

Grass waterway diversion channels can be managed to enhance soil conservation and improve habitat for wildlife if the following four recommendations are considered.

Avoid the overuse of tall fescue. Tall fescue is a nonnative cool-season grass. Tall fescue should be used only in steep and highly erodible areas or high-use areas. Although it is an important forage crop, tall fescue provides little benefit for wildlife because of its thick, turfgrass growth characteristics. It is often considered an invasive plant in pastures and grass waterways because of its aggressive growth habit and ability to outcompete native vegetation.

Plant a combination of cool-season and warm-season grasses — such as orchardgrass, perennial ryegrass, redtop, Virginia wildrye (Cuivre), switchgrass or timothy with a mixture of clovers, partridge peas or annual lespedezas — to enhance plant diversity.

Minimize or eliminate disturbance during the nesting season. Once the grass waterway is established, mow it on a two- to three-year rotation so that only half to a third of it is mowed during a given year. This practice will maintain the integrity of the waterway while providing some winter cover and areas for early-spring nesting habitat. Mow cool-season and native warm-season grasses no shorter than 6 inches. 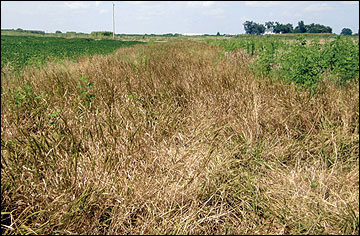 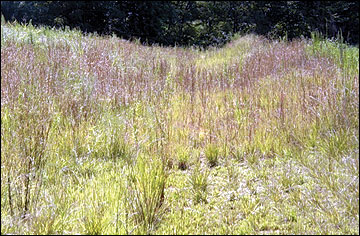 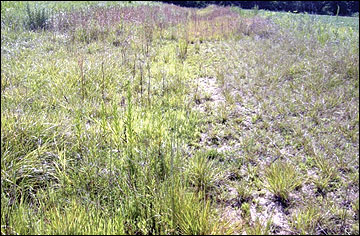 Notes
The treatments within the waterway diversion channel were subdivided into equal portions and planted to these mixtures.

All treatments were made with the listed proportions of pure live seed.

Another option for maintaining a field border beside an existing woody edge is to use a root plow to sever tree roots that compete with crops for moisture along the field edge (Figure 20). Root plowing allows crops to be grown in the low-yielding, “sapped” zone next to windbreaks. This technique is especially applicable to Osage-orange hedgerows but works on other tree species as well, especially those with large lateral root systems.

Root plows halt the sapping effect of tree borders on adjacent crops without destroying the windbreak, the border’s value as wildlife cover or its other benefits to crop yields.Windbreaks have been shown to cause increased crop yields in adjacent fields, which occurs because of the moderating effect windbreaks have on temperature and humidity. 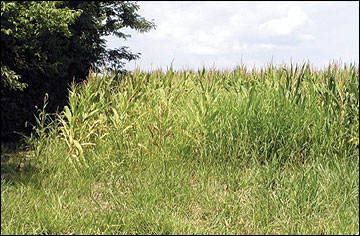 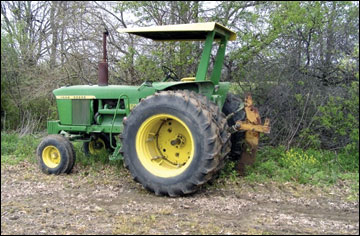 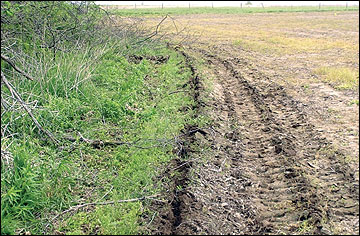 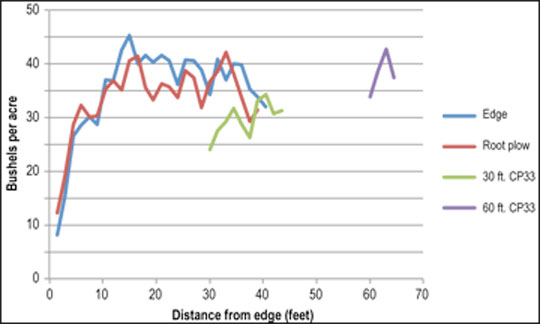 Figure 21. Soybean field-border study 2007-2009, average yield. The use of a root plow next to soybean fields did not provide a significant yield benefit. However, when combined with the establishment of a 30-foot field border, yield losses at the field edge were minimal. 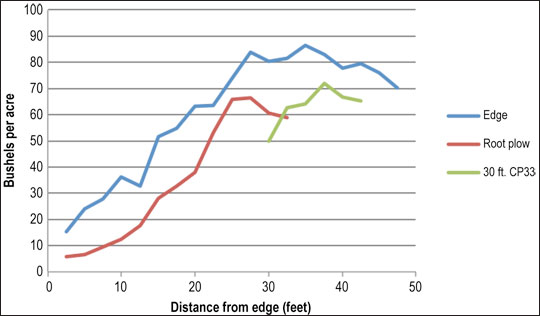 Figure 22. Corn field-border study 2007-2009, average yield. The use of a root plow around corn fields did not provide a significant yield benefit. However, establishing 30-foot field borders did minimize yield losses in rows adjacent to the field edge.