Inbreeding: Its Meaning, Uses and Effects on Farm Animals

Technically, various mating schemes of animals are classified under two broad categories — inbreeding and outbreeding. Classification depends on the closeness of the biological relationship between mates. Within each category, a wide variation in intensity of this relationship exists. A very fine line separates the two categories. Mating closely related animals (for example, parent and offspring, full brother and sister or half brother and sister) is inbreeding. With less closely related animals (first cousins, second cousins), people disagree about where to draw the line between inbreeding and outbreeding.

Technically, inbreeding is defined as the mating of animals more closely related than the average relationship within the breed or population concerned. Matings between animals less closely related than this, then, would constitute outbreeding. These two systems of mating, with varying intensities in each, are described in Table 1. Matings indicated within the inbreeding category are self-explanatory; those within the outbreeding category are defined in the glossary.

Biological relationship is important in animal breeding because the closer the relationship, the higher the percentage of like genes the two individuals carry. Closeness of relationship is determined by three factors:

Measurement of degree of biological relationship

The coefficient of relationship is a single numerical value that considers all the above-mentioned factors. It is a measure of the degree to which the genotypes (genetic constitutions) of the two animals are similar. It is estimated by Equation 1 below.

RBC = the coefficient of relationship between animals B and C which we want to measure.

FA, FB, FC = inbreeding coefficients of common ancestor and of animals B and C, respectively.

If none of the animals are inbred, the coefficient of relationship is estimated by Equation 2 below.

The use of this expression can be demonstrated with the full-sib sample pedigree and arrow diagram (Figure 1). In this example, assume neither sire nor dam is inbred. The arrow diagram on the right shows paths of gene flow from each of the common ancestors (D and E) to the animals whose coefficient of relationship we are measuring (B and C).

The problem now is to trace all possible paths from animal B to animal C that pass through a common ancestor. In this case, there are two such paths (Figure 2).

Since we have assumed no inbreeding in this example, the coefficient of relationship between animals B and C is estimated in Equation 3 below.

Usefulness of coefficient of relationship information

As an example, consider a herd with a feedlot average daily gain (ADG) of 2.25 pounds per day. Assume further that a sire from this herd had a 3.50 pounds per day feedlot ADG, while a younger half brother has not, as yet, been evaluated for feedlot ADG. Assuming no inbreeding, the coefficient of relationship between half brothers is 0.25. The best estimate of the untested animal’s feedlot ADG is that it will deviate from the herd average 25 percent as far as does the performance value of the tested half brother. Using these figures, the most probable feedlot ADG value of the untested animal is 2.25 + (0.25) × (3.50 − 2.25) or 2.56 pounds per day.

Measurement of the degree of inbreeding

The general expression for determining the inbreeding coefficient is estimated in Equation 4 below.

+1 = is added to n and n′ to account for the additional generation between animal × and its parents.

FA = the inbreeding coefficient of the common ancestor.

The problem now is to trace all possible paths from the sire (B) to the dam (C) through each common ancestor. As with the coefficient of relationship problem, there are two such paths:

Figure 4. Possible paths from sire to dam through all possible ancestors.

Since we have assumed neither parent is inbred, the inbreeding coefficient of animal × is estimated in Figure 5 as follows.

This is one-half the coefficient of relationship between full-sibs when there is no inbreeding.

The basic genetic consequence of inbreeding is to promote what is technically known as homozygosity. This means there is an increase in the frequency of pairing of similar genes. Accompanying this increase, there must be a decrease in the frequency of pairing of dissimilar genes. This is called a decrease in heterozygosity. These simultaneous events are the underlying reasons for the general effects on performance we observe with inbreeding.

Development of highly productive inbred lines of domestic livestock is possible. To date, however, such attempts have met with little apparent success. Although occasional high performance animals are produced, inbreeding generally results in an overall reduction in performance. This reduction is manifested in many ways. The most obvious effects of inbreeding are poorer reproductive efficiency including higher mortality rates, lower growth rates and a higher frequency of hereditary abnormalities. This has been shown by numerous studies with cattle, horses, sheep, swine and laboratory animals.

It is possible, however, to predict the extent of the effect of inbreeding on specific traits. Such predictions are based on results actually obtained under experimental conditions in which various levels of inbreeding had been attained. In research with swine conducted at the Midwest Regional Swine Breeding Laboratory, Dickerson and others (1954) point out that for each 10 percent increase in inbreeding (of the pigs in the litter), there is a decrease of 0.20, 0.35, 0.38, and 0.44 pigs per litter at birth, 21 days, 56 days, and 154 days, respectively. We can use such figures to provide estimates of expected decreases in litter size (at comparable litter ages) in other herds of swine.

Most inbreeding studies suggest each successive unit increase in inbreeding results in a proportional decrease in performance. Estimates of average increases in percentage inbreeding within a closed herd can be made with the expression:

Despite the generally poor results obtained with inbreeding, it is a very useful tool in animal breeding. Inbreeding is essential to the development of prepotent animals — animals that uniformly “stamp” their characteristics on their progeny. Because inbreeding causes an increase in the proportion of like genes (good or bad, recessive or dominant), the inbred animal’s reproductive cells will be more uniform in their genetic makeup. When this uniformity involves a relatively large number of dominant genes, the progeny of that individual will uniformly display the dominant characteristics of that parent.

Inbreeding may also be used to uncover genes that produce abnormalities or death — genes that, in outbred herds, are generally present in low frequencies. These harmful genes are almost always recessive in their genetic nature and their effects are hidden or masked by their dominant counterparts (alleles). Except for sex-linked traits, recessive genes are not expressed if carried singly. For their effects to be manifested, they must be present in duplicate. The likelihood they will be present in duplicate increases with inbreeding, because inbreeding increases the proportion of like genes (both good and bad) in the inbred population. With the effects of these genes uncovered, the breeder can eliminate them from his herd. He would cull progeny that showed the undesirable effect of these recessive genes and would also cull the parents that are carriers of the undesirable genes. In addition, two-thirds of the “normal” progeny of these carrier parents are themselves expected to be carriers of these same undesirable genes. In the absence of breeding tests to sort out the carriers from the non-carriers, it would also be necessary to cull all “normal” progeny of the carrier parents.

Tests in sheep and swine would require matings to fewer daughters. Actual numbers would depend on the average number of progeny produced per gestation in each species. Using the 0.01 probability level and assuming the average litter size is 1.5 in sheep and 8.0 in swine, the number of sire-daughter matings needed would be about 24+ for sheep and 5+ for swine.

Another important use of inbreeding is in the development of distinct families or inbred lines. Beginning with an initially diverse genetic population, inbreeding results in the formation of various lines, each differing genetically from the other. Continued inbreeding within these lines tends to change the frequency of some of the genes found in the initial population. For example, if a particular gene is present in only 1 percent of the animals in the initial population, inbreeding and the development of distinct lines could result in this gene being present in all or nearly all animals in some lines and in none or only a few of the animals in other lines. Inbred lines are used in a number of ways but are probably most notably used in the development of hybrid chickens or hybrid seed corn. 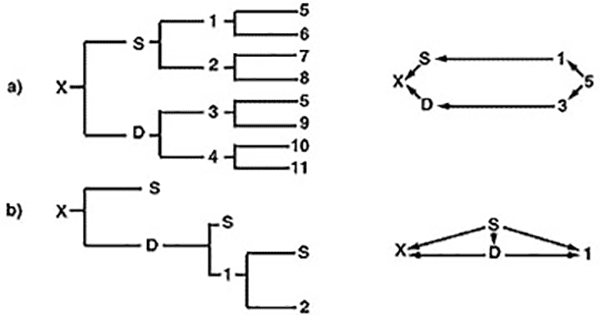 The sire-daughter program in part B effectively concentrates genes from animal “S,” but because of the rapid increase in inbreeding of the progeny produced in this program, the breeder runs the risk of greatly reduced performance and a high probability of genetic defects. Linebreeding programs are best used in purebred and high performing herds when a truly genetically superior individual in that herd has been identified and evaluated by progeny testing. Concentrating that individual’s genes would then be best accomplished by mating him to unrelated females to reduce the risk of harmful effects associated with such intense inbreeding.

Inbreeding is technically defined as the mating of animals more closely related than the average relationship within the breed or population concerned. For practical purposes, if two mated individuals have no common ancestor within the last five or six generations, their progeny would be considered outbreds. The primary genetic consequence of inbreeding is to increase the frequency of pairing of similar genes. All genetic and phenotypic changes associated with the practice of inbreeding stem from this one primary consequence. In general, inbreeding results in an overall lowering in performance. It is most obviously reflected in poorer reproductive efficiency, including higher mortality rates, lower growth rates and a higher frequency of hereditary defects. Despite these generally harmful effects, inbreeding is a very useful tool in the field of animal breeding. It enables the breeder to uncover and eliminate harmful recessive genes within the population. It is also essential to the development of prepotent animals and is desirable in the development of distinct family lines. In addition, seed stock and commercial producers have successfully used linebreeding to maintain a degree of genetic relationship in their animals to some outstanding ancestor or ancestors.