White grubs are the primary insect problem many homeowners face annually. Damage is usually noticed in late July to early August. Damage from the first generation can occur in late May. Small or large patches of dead or dying grass will have pruned roots so that sod can be pulled up or rolled back like a loose carpet. Numerous C-shaped, whitish larvae with brown heads will lie in the upper soil directly below dead sod. Predators, such as skunks or raccoons, often dig voraciously for grubs and may cause additional damage. 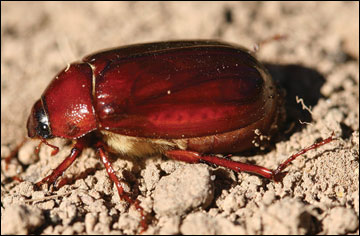 Adult May/June beetles are shiny, reddish brown and nearly 1 inch long. Adults are more active and attracted to lights at night, frequently flying into windows and screen doors. This beetle species has a three-year life cycle, and the adults can be damaging to trees and ornamentals. Newly hatched larvae should be treated during late July to early August; however, in the second year treatments can be made from April through September as the grubs continue to feed. Grubs complete feeding the third year, overwinter as adults, and emerge the following spring to complete the life cycle. 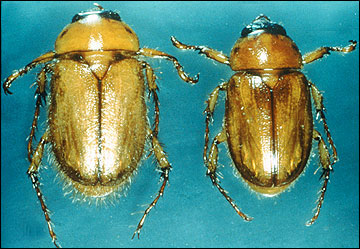 The masked chafers, of which there are several species, are often referred to as the annual white grub and may be the largest contributor to the annual white grub complex in Missouri. These beetles have a one-year life cycle. Adult beetles are tan, about ? inch long and attracted to lights. Treatment should be made about four weeks after the adult beetles start to emerge, when eggs begin to hatch in late July to early August. 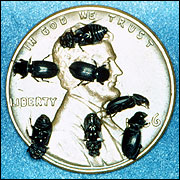 Black turfgrass ataenius (BTA) is primarily a pest on golf courses and not home lawns. Early damage appears as a small wilted spot, with higher BTA grub infestations resulting in larger patches of wilting and thinning turf, similar to symptoms caused by other annual white grub species. Grubs are about ¼ inch long and feed on the roots. Two BTA generations occur per year in Missouri, in May and August. Preventive applications may be necessary in April or May when adult beetles are emerging from overwintering. 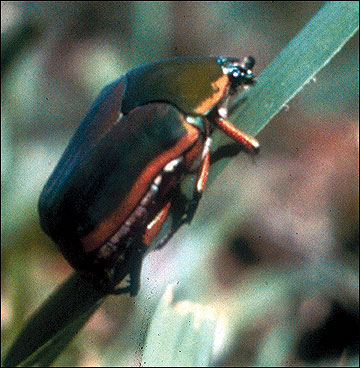 Grubs of the less common green June beetle are white and have the unusual habit of crawling on their backs. Damage is usually mechanical in nature, as these grubs simply push up mounds of dirt. The adult is a large, velvety green and tan beetle about 1 inch long. These beetles are attracted to soils with high organic matter, and grubs are commonly found in organic matter, which is their primary food source. 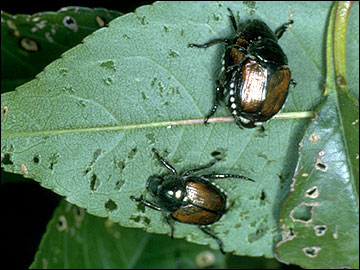 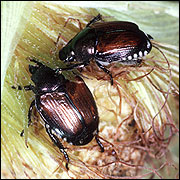 The Japanese beetle was introduced into Missouri in the early 1900s, with populations mainly centered in urban areas, but can now be found statewide. Adults beetles are metallic green or brown, with reddish-brown wing covers. As well as being a problem on ornamentals and row crops, these beetles contribute to the annual white grub complex. Grubs feed on turfgrass roots, causing a wilting appearance and gradual thinning.