Sowbugs and pillbugs are closely related to shrimp, crabs and lobsters. Although they may occasionally invade the home, they normally prefer moist areas outdoors at the soil surface in mulched flowerbeds, leaf litter, grass clippings and other debris around foundations. However, cracks between slabs and porches and in basement walls provide excellent hiding places from which these occasional invaders can enter homes.

These pests do not pose an economic or health threat to humans, but some sowbugs occasionally damage roots or the tender stems of plants. Millipedes and centipedes rarely damage seedlings. Sowbugs, pillbugs and millipedes do not harm humans or other animals, and centipedes usually are too small to injure humans. However, large centipedes (4 to 5 inches long) can inflict a wound similar to a bee sting. Annoyance from the presence of these invaders inside the home is the main concern with this group of pests.

Sowbugs and pillbugs will enter the basement and first floor of a home through cracks and crevices in the foundation and walls. Their presence indoors is a good sign that considerable numbers are present in the soil outside. These pests are very dependent on moisture, and unless there is an unusual moisture problem, these organisms do not survive indoors for longer than a few days. 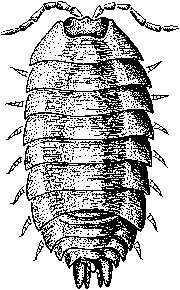 Sowbugs
Sowbugs are light gray to slate-colored, with slightly elongated bodies that can reach 1/2 inch in length (Figure 1). The body is distinctly segmented. Sowbugs have seven pairs of legs, two pairs of antennae and two prominent tail-like appendages.

Female sowbugs retain eggs in a brood pouch for three to four weeks until they hatch. After hatching, the young remain in the pouch for up to a month. These newly hatched sowbugs resemble the adults except in size. Each female can produce broods of 25 to 75 young several times a year. They are nocturnal in habit, due to their susceptibility to desiccation. 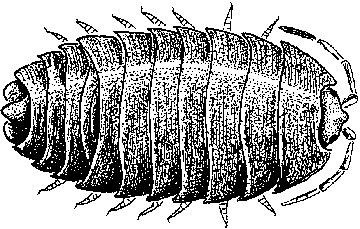 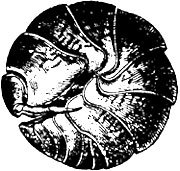 Pillbugs
Pillbugs are dark gray to black, and are not as flat as sowbugs (Figure 2a). The body is distinctly segmented with seven pairs of legs and two pairs of antennae. The abdomen has no tail-like appendages. Unlike sowbugs, pillbugs can roll into a tight ball when disturbed (Figure 2b). This response makes them easy to distinguish from sowbugs and has earned them the nickname "roly-poly." The reproductive biology of pillbugs and sowbugs is similar. The eggs are deposited and hatch within a brood pouch, where they stay for up to 45 days before emerging.

Pillbugs are nocturnal and remain inactive and hidden under objects during the day to reduce water loss. Avoiding water loss is important for them because they lack an outer waxy layer and cannot close their respiratory system. This leads to dehydration at low humidities.

Millipedes have long, many-segmented bodies with two pairs of legs on most of the segments. Their legs appear to ripple in waves as they move. They have a cigar-shape body that can be curled up when disturbed. They can remain curled up and motionless for long periods of time. Millipedes range in length from less than 1 inch to more than 4 inches (Figure 3).

Missouri has an abundance of good millipede habitat, including decaying leaf litter in the woods, decaying grass clippings, and other damp, decaying plant debris. Any situation that helps increase the amount of decaying plant material also contributes to increased populations of millipedes. Millipedes are considered beneficial due to their role in helping break down plant material and return nutrients to the soil. Some species of millipedes feed on living plants when their normal food source becomes dried out. In structures, they may feed on rotting wood but will not attack sound wood.

Most species of millipedes migrate in great numbers when the weather is too hot or too cold, too wet or too dry. We do not know what level of temperature or moisture prompts these migrations, but millipedes often migrate in the spring and fall, particularly in the Ozark region of Missouri. The brown millipede is the most common species in this region. Brown millipedes are about 1 inch long and are recognized by the dark brown body with lighter stripes running lengthwise along their body. They are a common problem around homes in or near densely wooded areas where the soil has a high content of organic matter. They can also be a problem where lawns have received heavy applications of compost, rotted manure or sewage disposal waste. Other species, especially those that can coil into a spiral, are found in fewer numbers.

The female millipede lays eggs in or on the soil under decaying plant material. The first-stage larvae have only three pairs of legs in most species. Larvae develop through several stages, increasing the number of body segments and pairs of legs at each stage. Larvae usually larvae go through seven to 10 developmental stages, reaching adulthood in about two years. Some species can take four or five years to complete development. Adults may live for several years. Because of their beneficial nature, elimination of millipede populations is not usually desired. Eradication is impossible because of the favorable climatic conditions in the state of Missouri. However, management of millipede populations can be accomplished.

Centipedes are flattened, elongate animals (Figure 4). They have many body segments, with one pair of legs attached to each segment. They are typically a reddish brown color. Centipedes are easily distinguished from millipedes based on the structure of the appendages. The antennae of centipedes are longer than those of millipedes and the legs of centipedes project laterally from the body, while the legs of millipedes are held beneath the body. In centipedes, the first pair of legs is modified into venomous fangs located immediately below the mouth. These fangs are used to kill insects and other small creatures that are used as food. Millipedes have no such fangs.

Centipede populations do not build up in great numbers like millipedes. However, they still may occasionally enter homes. They may be found crawling over the floor, in closets, storage rooms and other dark areas. They prefer moist areas and need a moisture source to avoid desiccation. However, they can obtain some moisture from their prey, which allows them to survive longer under drier conditions than millipedes, sowbugs, and pillbugs when prey items are available.

The common house centipede, Scutigera coleoptrata, is often not recognized as a centipede, due to its extremely long legs and antennae (Figure 5). This centipede's body is slightly over an inch long with 15 pairs of long legs. The antennae and the last pair of legs are nearly twice the body length. House centipedes are bluish gray, and the legs have a pattern of dark and light bands. They move quickly and are occasionally mistaken for long-legged spiders. Despite their appearance, they are very beneficial because they eat spiders and household insect pests. House centipedes usually are found in damp basements and other moist indoor areas. They are not a health threat to humans or pets.

Sanitation is the first step in managing infestations of sowbugs, pillbugs, millipedes and centipedes. Remove vegetation and other organic matter such as rotting wood or clippings from the soil surface around the foundation of your home. Minimize watering near the foundation as well. Removing debris and moisture will reduce the likelihood that sowbugs, pillbugs, millipedes and centipedes will enter the home. A program of continued sanitation close to the building, such as cleaning up or removing piles of rocks, boards, leaves, compost, and general refuse, will help reduce populations of these pests.

Check the basement, foundation, and first-floor entrances for cracks and crevices and use caulking or other filling materials to minimize the number of entry points around doors, basement windows and other openings. In addition, reduce water seepage and ventilation problems so that damp hiding places are eliminated.

Outdoor management: Pesticides may be used in areas where sowbugs, pillbugs, and millipedes persist despite sanitary measures. To reduce migrations into homes, treat the outside foundation and adjacent ground in a strip about three feet wide with a dust or aerosol spray that is labeled for these pests. Read the label and follow all label directions when using pesticides. If the label does not include sowbugs, pillbugs, millipedes or centipedes, it should not be used to manage these pests.

For homes in or near wooded areas that contain large amounts of organic matter and moisture, it may be necessary to treat a strip around lawn edges and adjacent to the woods. A dust or granule formulation is best in this case. Reapplication is needed after a heavy rain.

During mass migrations of millipedes, residual pesticide deposits on the soil surface will have very little effect because of the relatively short time of exposure as millipedes move across treated areas. For effective management in these situations, it is desirable to identify the location of the migrating population by inspecting during the night with a flashlight. Look in areas such as outlying grassy and wooded areas. Direct nighttime treatment of millipedes with an appropriately labeled contact pesticide may be needed for several nights in severe cases.

Indoor management: In cases where sowbug, pillbug and millipede invasions are not solved by outdoor management strategies, you may choose to apply pesticides to selected interior basement or ground floor areas. In these situations, it is desirable to use targeted applications of pesticide to areas where the pests are likely to occur, rather than indiscriminately treating large areas. Areas where targeted applications are beneficial for these pests are points of entry from outdoors. These areas include windowsills, doorsills and casings and the junction of walls and floors.

Direct application of a household aerosol spray containing pyrethrins or any of the pyrethroids may also be needed to control occasional centipedes, millipedes, sowbugs and pillbugs. To avoid spotting or staining of finished surfaces, obtain ready-to-use household formulations that are available at hardware stores, lawn and garden centers, or other reputable merchants.

If house centipedes are numerous, it may be useful to eliminate their food source through control of insect populations in the home.