Biology and Management of the American Woodcock in Missouri

The American woodcock (Scolopax minor) is a migratory game bird that inhabits much of the central and eastern United States (Figure 1). It belongs to the shorebird family, but unlike other species such as the sandpiper and common snipe, woodcock have adapted to a mixture of habitats in upland locations, including woodlands and young forests with early stages of plant regrowth, also referred to as early successional vegetation. They are popular with hunters and birdwatchers alike across their range.

Although few woodcock nest in Missouri, the state is an important migration corridor, providing habitat for birds traveling between wintering and breeding areas farther north. Understanding woodcock migration is a conservation priority, as mortality can be high during this time. Therefore, habitats that provide food and cover along the migratory route are crucial to their survival.

The arrival of woodcock to Missouri is a sign that spring is near. Many bird enthusiasts enjoy observing the mating behavior of males performing their nightly "sky dance" to attract females at this time of year. This guide provides information on woodcock biology, their life cycle and habitat needs, as well as an overview of management techniques that landowners and managers can use to improve habitats for woodcock on their property.

Males and females have similar mottled brown and black plumage that blends into the ground cover of the forest floor. Their most distinguishing features are their bulging eyes that sit on the side of their heads and their 2- to 3-inch long bills. They use these long, protruding bills to probe deep into the soil for earthworms and other insects (Figure 2). Woodcock are relatively small birds, standing only about 8 inches tall and weighing 6 or 7 ounces. However, their short, powerful wings enable them to fly quickly through woodland thickets and brushy cover where they stay throughout the day.

Woodcock arrive in Missouri in mid-February when the daily minimum temperature is below 32 F and the winds are from the southeast. The Ruffed Grouse Society has developed a National American Woodcock Migration Mapping System that shows the bird's migratory movements. See Resources for a link to the online tool.

Breeding males court females by flying up into the air from "singing grounds" that they often return to year after year and defend from other males. These areas — typically fallow fields, pastures, forest and woodland openings, or young stands of forests (Figures 3a, 3b and 3c) — vary in size from a few acres to more than 100 acres. In Missouri, mating activity begins in February and peaks in mid-March. During most evenings at this time of year males perform a spectacular aerial courtship display that begins with them making a buzzing sound, called a "peent." As the males call, they pace in circles on their singing ground before winging into the air in a spiral ascent as high as 300 feet and swooping back to the ground. As they drop, the birds emit a distinct whistle, as well as chirping and twittering sounds, created by the wind passing through the birds' narrow outer wing primary feathers. Depending upon the weather conditions and available light, the males repeat these courtship displays throughout the evening.

Females mate with a male on its singing ground and will often build a shallow nest on the ground close to the courtship area. While few woodcock nest in Missouri, those that do begin laying eggs in the second half of March. Most hens prefer young forest growth near the base of small trees or shrubs. Hens will typically lay four brown-spotted, buff colored eggs that blend into the surrounding vegetation (Figure 4). If the nest is destroyed or if young are lost during brood-rearing, hens are able to renest. Hens will incubate the eggs for 21 days. Within a day of hatching, chicks travel with the hen away from the nest. For the first couple of weeks, hens gather food for and feed their chicks. After about a month, the young disperse on their own from the brooding area until fall migration.

During the fall, woodcock from northern areas, joined by those in Missouri, migrate further south. Most birds migrating through Missouri will spend winters in south Texas, Louisiana and other Gulf states. Shortening day length and weather conditions influence migration. As days grow longer in late winter and spring, woodcock migrate north to their breeding grounds. 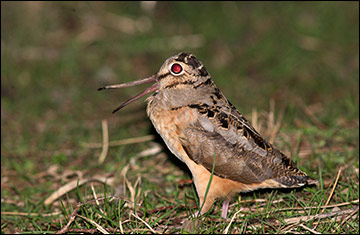 Figure 2
American woodcock use their long bills to probe soil for earthworms. 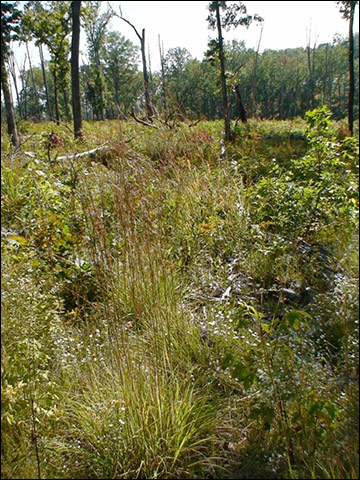 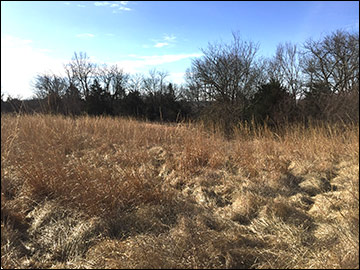 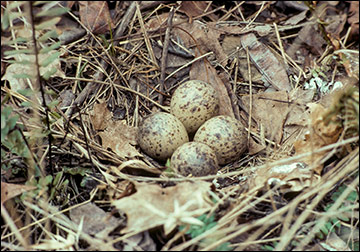 Earthworms make up more than 80 percent of the woodcock's diet. They use their bills to probe into damp soil or under leaf litter for food. When earthworms are scarce, their diet includes a variety of invertebrates, such as beetle larvae, flies and other insects.

Woodcock populations depend on the availability of quality habitat across their range. They use younger woodland or forest habitats in early stages of regrowth, such as shrubby thickets and young trees that grow in moist, fertile soils with ample earthworms and other food sources.

Quality habitat in their migration corridor is critical to woodcock for providing food for their energy requirements and cover needed for protection from predators. Woodcock in Missouri need a mixture of habitats to meet varying needs:

Young, dense and shrubby thickets in soils with ample earthworms. These habitats often have second-growth hardwoods and young saplings and shrubs. As these stands mature, woodcock avoid them.

Early growth vegetation, such as forest openings, clearings, stands of native grasses or fallow fields that provide singing grounds for breeding males. These openings should be a minimum of about 2 acres and close to dense shrubby thickets that woodcock use during the day.

Suitable areas for nighttime roosting, such as old thickets, hayfields, pastures or recently harvested forests. Woodcock prefer to roost on the ground in areas with sparse ground cover so they can move freely in search of foods. These habitats also provide areas woodcock use for foraging.

Create or maintain areas with dense thickets and young stands of forest in moist locations, such as along the edges of woodland, next to streams or in wet areas of fields. These brushy cover areas can be 50 to 100 feet wide, bordering a woodland or forest edge. Encourage the growth of this vegetation by cutting trees along the edge that are 6 inches or more in diameter and/or by hinge cutting trees and letting them fall. Hinged trees stay alive and provide cover for a longer time. These practices encourage the growth of shrubs, thickets and brushy cover that woodcock favor.

If you own larger tracts of forest land, consider working with a professional forester to develop a timber harvesting plan that will regenerate areas throughout your property over time. Woodcock benefit from forest management practices that encourage frequent disturbances of mature growth and provide for early stages of plant succession, or regrowth, such as vegetation found in forest openings. Prescribed fire or other types of disturbances, such as mowing or discing, maintains these areas in an early stage of plant regrowth.

Establish trees and shrubs along woodland edges and next to streams and creeks in areas at least 1 acre and 50 feet wide. Consider planting hawthorn, crabapple, dogwood, hazelnut, elderberry, sumac, prickly ash or plum thickets to create dense cover for woodcock.

Create and maintain forest or woodland openings for singing grounds. These areas should be at least 2 acres and scattered across areas with mature timber.

Refer to MU Extension publication G9415, Integrating Woodland and Wildlife Management Practices on Your Property, for information on improving your woodland or forest for wildlife. Many of the same management practices will benefit woodcock. MU Extension publication MP907, Establishing and Managing Early Successional Habitats for Wildlife on Agricultural Lands, also provides information on management techniques to enhance habitats for woodcock.

Additional information about woodcock biology, habitat and links to video, calls and their mating ritual can be found at the The Cornell Lab of Ornithology's website. See Resources for the link.

The American woodcock is a migratory species that depends on habitats that provide ample food and cover throughout its range. The U.S. Fish and Wildlife Service, with cooperation from state agencies, conducts annual counts of male woodcock on their breeding range, monitoring populations and trends. These counts show that populations have declined over the last couple of decades due to many factors, including loss of their preferred brushy habitat due to urban development and the maturing of young woodlands into older forests.

Woodcock typically breed and nest in the northern United States and southern Canada and migrate to wintering grounds in the south. Habitats that provide food and cover are vital within their migration corridors, and private landowners in Missouri can manage their property to benefit woodcock. A wildlife biologist or a private lands conservationist with the Missouri Department of Conservation can provide more information and technical assistance to help you enhance your property for woodcock and other wildlife species such as bobwhite quail, white-tailed deer, wild turkey and songbirds.