The ability to age live deer, or deer “on the hoof,” is a beneficial skill for all deer hunters and managers. Many hunters and landowners are implementing quality deer management (QDM) approaches into their management activities or have an interest in increasing their opportunity for harvesting larger bucks. Both goals depend on allowing younger bucks to mature into older age classes. Deer management success can be increased by the ability to age live deer. By being able to recognize that a buck has the characteristics of an immature, or younger, deer, a hunter can pass on harvesting that buck so it will have the opportunity to mature to an older age class. This guide provides information on body characteristics of deer in various age classes for use in making management decisions while hunting or while evaluating trail camera photos (Figure 1).

Bucks in the 1-1/2-year-old age class are often characterized as “does with antlers” due to their body characteristics. A yearling typically has a thin neck, taut stomach, long legs and a thin body (Figure 2). Antler size can vary dramatically among individual yearlings, but on average they reach about 25 percent of their maximum antler size at this age. Although the number of antler points on yearlings can vary widely, from two to 10+ points, the inside spread of a yearling’s antlers is often less than 15 inches.

Also, yearlings tend to be less cautious and will often enter openings before mature bucks.

Bucks in the 2-1/2-year-old age class typically have slightly thicker bodies than yearlings, but their legs still appear long (Figure 3). They have thinner necks when compared to older age classes of bucks, although their necks may slightly increase in size during the rut. On average, 2-1/2-year-old bucks have reached about 60 percent of their maximum antler size. 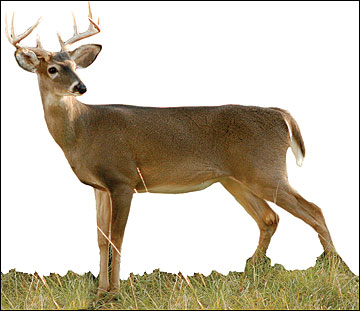 Figure 3. A 2-1/2-year-old buck’s legs still appear long for its body, but its body is thicker than a yearling’s.

Bucks in the 3-1/2-year-old age class are typically described as having a “thoroughbred” appearance due to their toned body characteristics (Figure 4). A buck in this class has a muscular body, a chest that is slightly deeper than its rump, and a taut stomach. During the breeding season, a 3-1/2-year-old exhibits a moderately swollen neck. On average, 3-1/2-year-old bucks have reached about 75 percent of their maximum antler size. 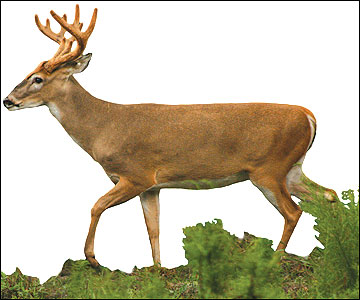 A 4-1/2-year-old buck has a thick, muscular body with taut skin and legs that appear to be proportional to its body (Figure 5). The buck’s stomach appears to sag slightly, but its back remains straight. During the rut, the neck of a 4-1/2-year-old buck becomes very swollen. A 4-1/2-year-old buck’s body has reached physiological maturity, and its antlers have reached about 90 percent of their maximum potential. 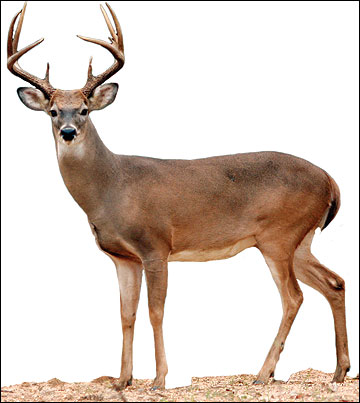 Figure 5. A 4-1/2-year-old buck will have reached about 90 percent of its antler size potential.

A buck that is 5-1/2 years old or older has a thick body and often exhibits a sagging belly, back and skin (Figure 6). In addition, the buck’s neck increases greatly during the breeding season to the point that it appears to blend in with the buck’s shoulders and brisket. On average, bucks’ antlers reach about 95 percent of their maximum potential by 5-1/2 years old and 100 percent by 6-1/2 years old. Older bucks can appear younger because their bodies tend to decline in mass. Most bucks in the wild do not survive to this maturity level due to hunting pressure. In general, an older buck’s antlers are more asymmetrical and slowly decline as the buck continues to age. 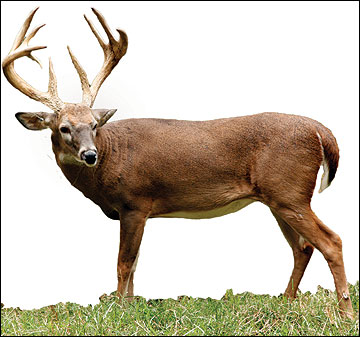 The time of year plays an important role in successfully estimating the age of live bucks. Seasonal variations in the characteristics of a buck’s body are mainly associated with changes due to the rut, or breeding season. The physical changes and demands the rut requires can have a significant influence on a buck’s body characteristics, especially those of a mature buck.

Most bucks experience their best body condition during the pre-rut, as they have just spent all spring and summer in bachelor groups foraging on ample amounts of high-quality foods (Figure 7a). Regardless of maturity, many bucks will not exhibit a swollen neck at this time because it is too early before the rut. 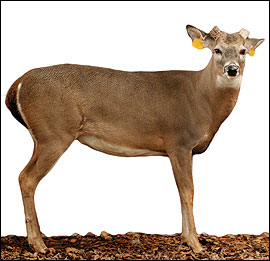 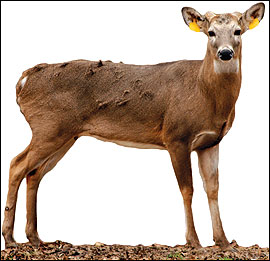 Figure 7. These photos depict the same buck (left) before the rut, when in great physical condition, and (right) after the rut, when fatigued from breeding activity.

Most bucks are still in good physical condition at the beginning of the rut. However, as the rut progresses and bucks fight for dominance and breeding, body wear and antler breakage become more common. The rut is when bucks exhibit swollen necks (Figure 8). Bucks lose weight as the rut progresses because they spend more time involved in breeding activity than foraging. In areas with an unbalanced sex ratio skewed towards females, the rut tends to last longer and has a greater negative impact on a buck’s overall body condition. 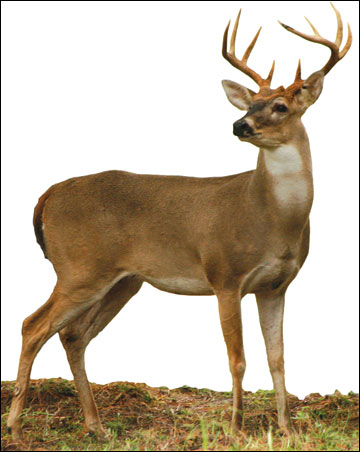 During the post-rut, bucks are normally in the worst condition of the year, as their bodies are fatigued from the demands of the rut (Figure 7b). They often appear much thinner than in the pre-rut because they have been expending great amounts of energy participating in breeding and defending females or territory, while not replenishing their energy reserves. Research has shown that mature bucks can lose up to a quarter of their body weight during this time. Bucks can actually die during this period, especially when the winter is severe and little food is available.

Distinguishing fawns and adult does

The ability to distinguish between adult does and fawns is important for several management reasons. For example, identifying whether a deer is a doe or a fawn can be crucial to ensure accurate data from observations or camera surveys and when there is an important reason to harvest one sex over the other, such as to balance the sex ratio or to increase or decrease the population.

Distinguishing between adult does and fawns is easier when they are observed together, as adult does are obviously larger than fawns. However, if a deer is alone and no comparison can be made, the length of the snout is a good indicator, as adult does tend to have long, slender snouts, and fawns tend to have short, stocky snouts (Figure 9). An adult doe also tends to have a more rectangular body shape and, depending on its age, may have a sagging belly and back. A fawn typically has a square body and tight belly.

Behavior can also be a good indicator of age. Adult does tend to be cautious, while fawns are often the first deer in openings and are often observed playing and being more inquisitive. 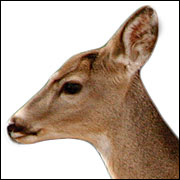 Figure 9. Snout length differentiates adult does and fawns: (left) an adult doe will have a long, slender snout and (right) a fawn will have a short, stocky snout.

Aging live deer is not an exact science and provides only an estimate of age. Although aging characteristics apply to a large percentage of the population, they are not universal. Also, the accuracy of aging live deer decreases as deer grow into older age classes. However, in most cases, bucks can be identified as immature or mature with moderate certainty.

In general, aging deer on the hoof is a beneficial skill for landowners and hunters that want to achieve QDM or produce mature bucks. An understanding of the progression of body and behavior characteristics of bucks can be extremely helpful when attempting to age live deer. Estimating the age of live bucks on a property can provide useful information for managing the deer population and allowing bucks to mature.