Aging a Deer by Examining Its Jawbone

Successful deer management involves keeping accurate harvest records and manipulating several deer population parameters, including the sex and age ratio of the deer herd. Managing the age structure of the buck segment of the population is considered one of the most important factors for improving the quality of the deer herd within a particular area.

The age of a deer can be estimated from the dental characteristics of the lower jaw. The two techniques used to determine the age of deer from the jawbone are tooth replacement and wear and cementum annuli. 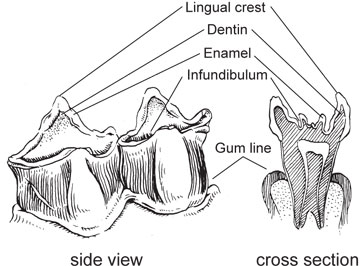 Figure 1. Anatomy of a deer molar.

Figure 2. The deer jaw consists of incisors in the front, premolars and molars in the back, and a wide gap called the diastema in between.

Figure 2 depicts the jawbone of a healthy adult white-tailed deer. The incisors are the teeth in the front of a deer’s mouth. Premolars and molars are located along the side of the jaw, separated from the incisors by a wide gap called the diastema. Deer do not have any top front teeth but only a rough palate. As a result, vegetation bitten off by deer appears to have been torn off and has a rough edge, whereas vegetation snipped off by rabbits or groundhogs is clean and smooth.

Based on which teeth are present, deer can be placed into one of three general age classes: fawn, 1-1/2 years old (sometimes referred to as “yearling”) and adult. Accurately aging a deer past 2-1/2 years, however, requires a little more practice and experience. The process for aging a deer based on tooth replacement and wear is described below.

Figure 3. A fawn has only three or four fully erupted teeth along each side of its jaw.

Yearling
Yearlings generally have six fully erupted teeth along each side of the jaw. If the deer was born late or was killed early in the hunting season, the third molar (M3) may not be fully erupted. However, six teeth should be present along the jaw. Because the third premolar (P3) has not yet been replaced by a permanent P3, it still has three cusps. If the jawbone has six teeth along the side and P3 has three cusps, the deer is a yearling (1-1/2 years old). However, the third premolar will be replaced at 18 or 19 months, which will be obvious as P3 will have 2 cusps, will be white and unstained, showing virtually no wear, and may not be fully erupted (Figure 4). 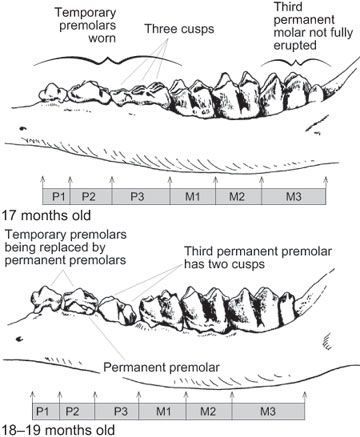 Figure 4. Yearlings have six fully erupted teeth on each side.

Adult
Adult deer (2-1/2 years and older) will have six fully erupted teeth along each side of the jaw: three permanent premolars and three permanent molars. Once again, note P3: It is now a permanent tooth and has only two cusps. In such cases, the deer is most likely an adult (Figure 5). However, as previously mentioned, a yearling could have a P3 with two cusps if it was an early-born fawn or was harvested late in the hunting season (into January).

Aging of adult deer into older age classes requires evaluating the amount of wear on the teeth. Over time, teeth wear down, increasing the width of dentin (brown) exposed along each tooth’s cusps. Specific age is estimated by comparing the width of dentin in relation to the width of enamel (white), while measuring overall wear (Figure 6). This deer-aging technique typically requires that the lower jawbone be extracted or the cheek cut away so that the teeth can be inspected closely.

Figure 5. In an adult deer, P3 has only two crests. 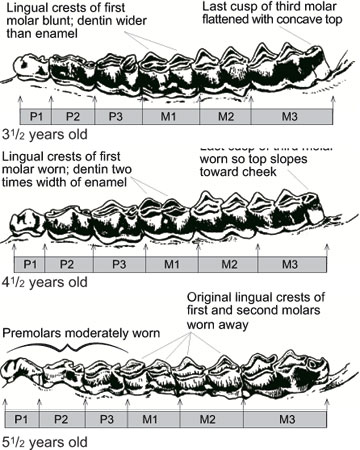 Removing the jawbone for aging

Removing a deer’s jawbone (mandible) for aging by tooth wear and replacement can be easily accomplished by using a pair of long-handled pruning shears and a jaw-extractor (Figure 7).  Both of these tools can be purchased from various companies, including Forestry Suppliers at http://www.forestry-suppliers.com. 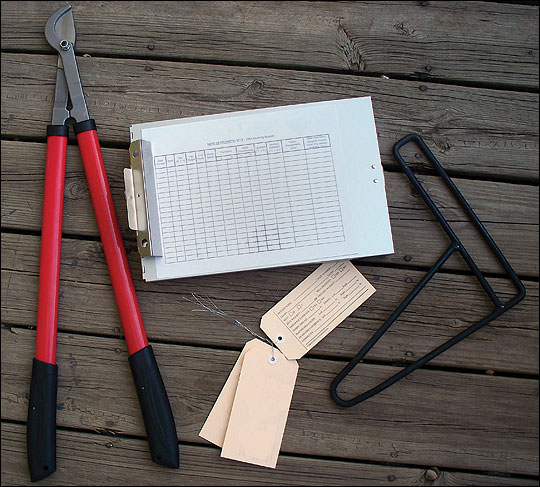 Figure 7. Pruning shears and a jaw extractor are two of the tools necessary to remove a deer’s lower jaw for aging. 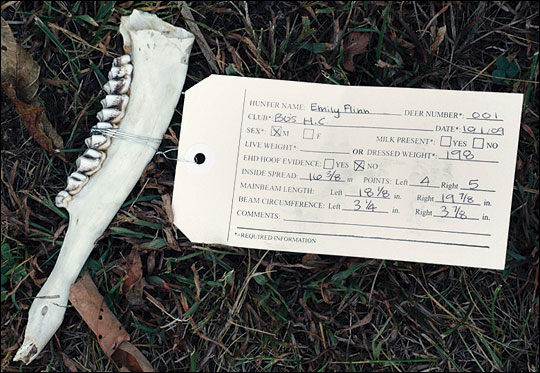 Figure 8. Label each deer jaw with identifying information about the deer to ensure harvest records are accurate.

The cementum annuli technique is similar to aging a tree by counting growth rings and is the most reliable method for accurately estimating age. Each year as a deer ages, cementum is deposited on the external root surface of its teeth, resulting in a pattern of “rings.” Counting these rings is relatively expensive because of the time and specialized laboratory equipment required to perform the analysis. Several commercial sources offer these services.

For more information on aging white-tailed deer by the tooth replacement and wear technique and the cementum annuli technique, contact the Missouri Department of Conservation, http://mdc.mo.gov/.

Illustrations by Charles W. Schwartz (Figures 3–6) are reprinted with permission from The Wild Mammals of Missouri, University of Missouri Press and Missouri Department of Conservation.