The soybean or Dectes stem borer, Dectes texanus texanus LeConte, is a small, gray, long-horned beetle that attacks soybean and wild host plants. This is an occasional soybean pest in Missouri, and crop damage caused by this pest has been sporadic across parts of the state and growing seasons.

The Dectes stem borer overwinters as mature larvae within the stem of its host plants, and the adult beetles begin emerging sometime in late June or early July. The adult beetle is gray, about 3/8 inch long and somewhat flattened, with long, slender antennae (Figure 1). Eggs are elongated, shiny, tapered on both ends and initially yellowish before darkening to an amber color just before the larvae hatch. Newly hatched larvae are creamy white but darken as they mature. Larvae have an "accordion-like" appearance with an orange-red head and reach about 1/2 to 5/8 inch in length when they are fully mature (Figure 2). The pupal stage (yellowish white before turning dark brown before the adult emerges) lasts 8 to 10 days, and then the adults start emerging. After mating, the female beetle chews a small hole in the leaf petiole or the stem and then typically lays a single egg inside. 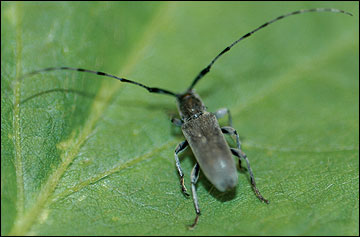 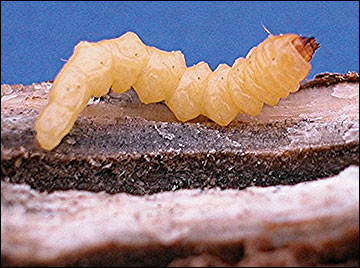 After hatching, the larvae feed for several days on the outer stem before they bore into the main stem (Figure 3). Typically, the petiole wilts and falls off the plant, leaving behind a reddish scar around the entrance hole. As the larva tunnels within the main stem, it feeds on the pith tissue (Figure 4). This damage can reduce the plant's ability to translocate water and soil nutrients to developing pods and seeds, and yield losses may occur in heavily infested fields.

In late summer, the larvae move to the base of the plant and girdle the interior of the stem approximately 2 inches above the soil surface (Figure 5). The larvae then plug the stem with their frass, creating a cell where they overwinter. This girdling stage can increase lodging during windy days or heavy rains as heavily damaged soybean plants mature.

Damage from this insect may coincide with increased no-till soybean plantings, which provide undistributed overwintering sites for the larval stage. Since the Dectes stem borer also feeds on important weed hosts (e.g., cocklebur, giant ragweed), the presence of these weeds in and around soybean fields can further increase the risk of Dectes stem borer infestations. 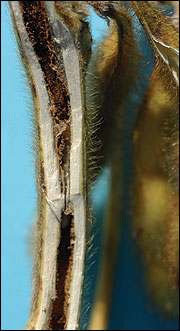 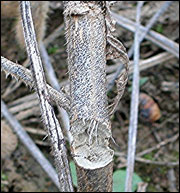 Scouting procedures are difficult and limited for this insect in soybean fields. Beginning in late June or early July through August, adult beetles begin emerging and may be collected in sweep net samples. Thereafter, look for lodged plants, which may indicate the presence of Dectes stem borer infestations. Cut open the stem and look for the presence of the larva and its feeding damage. Counts of larvae and lodged plants will provide a useful basis for determining the appropriate cultural practices later in the season.

No insecticides are specifically labeled to control the Dectes stem borer, and insecticide applications are generally not recommended because it is extremely difficult to properly time applications. Emergence of the adult beetles is typically spread out over several weeks; therefore, multiple insecticide treatments would be needed to obtain effective control of these infestations.