The bean leaf beetle, Cerotoma trifurcata (Forster), is one of the most important soybean pests in the United States. It is tied for second among all pest species attacking soybean foliage, pods and seeds. This insect was once an infrequent soybean pest in the Midwest; however, in the 1970s, soybean growers began reporting increased incidence of bean leaf beetle feeding damage. 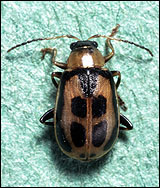 This small beetle (at least 1/4-inch in length) overwinters as adults beneath leaf litter in wood lots adjacent to soybean fields. Once spring temperatures reach 50 to 55 degrees Fahrenheit, adults become active and seek available host plants (such as grasses, soybean plants and other legumes). Adult coloration (red, orange, tan or gray) and markings (dots, strips, or both) may vary among individuals or populations; however, all adults possess a black triangle at the base of their forewings (Figures 1 and 2). A female beetle is capable of producing 130 to 200 eggs. The reddish, spindle-shaped eggs are laid adjacent to plant stems in the upper 5 inches of the soil.

Both bean leaf beetle larvae and adults possess chewing mouthparts. Larvae may feed on roots and root hairs but show a preference for root nodules. Even though nodule damage can diminish the plant's ability to fix atmospheric nitrogen, it is the adult feeding damage to foliage and particularly pods that is economically important. Defoliation by adult bean leaf beetle is identifiable by the small round holes between the major leaflet veins (Figure 3). This damage differs from the larger, irregular holes or jagged leaflet margins caused by caterpillars and grasshoppers. Even though soybean plants may sustain more than 50 percent foliage damage, plants can generally compensate unless damage occurs during the reproductive growth stages. 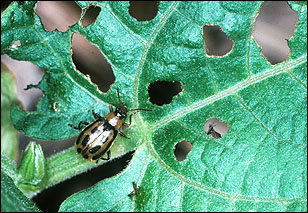 Based on current research, pod damage by adult bean leaf beetles is the most important type of injury (Figure 4). This damage can cause complete pod loss when adults feed at the base of the pod. This type of injury is referred to as "pod clipping." Adult damage to the outer pod wall also leads to the formation of pod lesions. Moisture can then enter through these pod lesions, and this increased moisture level permits the entry of secondary pathogens. Seeds damaged by these pathogens become shrunken, discolored and moldy. Several primary pathogens (e.g., bean pod mottle, cowpea mosaic and southern bean mosaic viruses) also can be transmitted by adult beetles. The impact of bean leaf beetles on yield has been quantified in several different studies. Overall, a reduction of 0.6 pound per acre can occur when beetles number one or more per row foot. 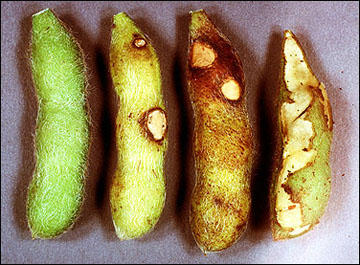 As soon as soybean seedlings emerge, it is important to scout fields weekly for bean leaf beetle infestations. Scouting procedures are targeted at the adult stage because sampling for the larvae is expensive, labor intensive and time consuming. Direct observations along with stand counts can be used early in the season. By midseason, either sweep nets or drop cloths are effective sampling tools. Adult bean leaf beetles are shy and when disturbed will drop to the ground or onto lower leaves. When caught in a sweep net, they usually remain at the bottom of the net hiding underneath leaves or within the folds of the net. Counts of adults as well as damaged pods are useful tools for determining insecticide applications later in the season.

In bean leaf beetle pest management, various sampling tools are used to trigger insecticide applications. In Missouri, economic threshold levels vary according to the growth stage of the plant:

Before you select and apply an insecticide, review the manufacturer's label for information on safe use of the material.

Many different parasitoids and predators attack bean leaf beetles and other soybean pests. The diversity and abundance of this beneficial insect complex should be considered before applying an insecticide. The most common parasitoid enemy of bean leaf beetles is the tachinid fly, Calatoria diabroticae (Shimer). It attacks the adult stage but is difficult to detect under most circumstances.