Stink bug at a glance

In Missouri, the green stink bug, Acrosternum hilare (Say), and brown stink bugs, Euschistus spp., commonly infest soybean fields. Throughout North America, the green stink bug is tied for second among all insect species attacking soybean pods and seeds. Stink bugs are typically more of a problem in the southern states than in northern states. 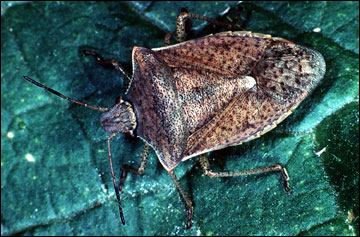 Stink bugs overwinter as adults underneath leaf litter, tree bark, and other materials in areas not used for crops. When spring time temperatures begin to increase, stink bugs become active and begin feeding on both cultivated and wild host plants. Adult green stink bugs are bright green with black bands on their antennae. They differ from southern green stink bugs, Nezara viridula (L.), by having a pointed (not rounded) spine between their hind legs. Adult brown stink bugs are brown with yellow to light-green undersides. They should not be confused with the spined soldier bug, Podisus maculiventris (Say), a predaceous stink bug species that also is brown and has a cream-colored underside. Spined soldier bugs differ from brown stink bugs by having more pronounced spines on their pronotum (shoulders), a black spot on their abdomen, and reddish legs.

Once overwintering adult stink bugs rebuild their energy reserves, they mate, and females begin laying their eggs in early summer. Females lay tight clusters of 10 to 30 barrel-shaped eggs on soybean plants. Depending on weather conditions, the nymphs will hatch within one to three weeks. The first-instar nymphs (the green stink bug is reddish brown; the brown stink bug is yellow to tan) do not feed and remain clustered on their egg masses. The green stink bug nymphs (second- and third-instars) are pale to dull green with black and white strips. Later instar nymphs are green with yellow and black strips or a pale, yellow-green color with black markings. All brown stink bug nymphs are yellow to tan with brown spots down the middle of their abdomen. Depending on the species and weather conditions, it takes between 23 days and two months to progress from the egg to adult stage. Depending on the species, stink bugs annually will have one to three generations in Missouri.

Both the nymphal and adult stages attack primarily the seeds and pods of soybean plants (Figure 2). They also will feed on soybean plant stems, foliage, and blooms. Usually the location of feeding punctures can be identified by the presence of small brown or black spots. Direct feeding damage can lead to a reduction in seed quality and quantity. Young seeds can be deformed, undersized or even aborted, whereas older seeds will be discolored and shriveled. The germination rate also will be reduced for beans produced as a seed source. Indirectly, feeding damage by stink bugs can delay plant maturity and cause the abnormal production of leaflets and pods. This condition is referred to as the "green bean effect." For example, southern green stink bugs cause the most damage from the time soybean seeds begin to develop until they begin to fill. 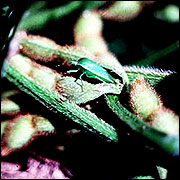 Either sweep nets or drop cloths can be used to sample for stink bugs. It is important to sample several sites in a given field because of the insect's clumped distribution. Because female stink bugs are highly attracted to the soybean plant once it starts to bloom, sampling should begin at that time. When sampling for stink bugs, combine the counts of later-instar nymphs and adults.

In Missouri insecticide treatments are recommended when adults or later-instar nymphs reach at least one per foot of row as soybean pods begin to fill with seeds. Stink bugs usually reduce quality more than they do quantity; therefore, soybean grading standards also can be helpful to determine the need for rescue insecticide treatments.

Precaution
Before you select and apply an insecticide, review the manufacturer's label for information on safe use of the material.

Stink bug populations are partially suppressed by predators and parasitic wasps. The egg parasitoid Telenomus podisi Ashmead is the most common parasitoid of stink bugs in Missouri. Parasitized stink bug eggs are typically darker than nonparasitized ones. Along with various predaceous insects, egg parasitoids can destroy more than half of the stink bug eggs in a field.