Note
SCN Diagnostics will analyze your soil for nematodes.

Most plants, whether naturally occurring or cultivated, have nematodes associated with them. Some nematodes are endoparasitic, spending their lives within plants (Figure 1). Others are ectoparasitic, and only their stylets — hollow, protrusible spears used to puncture plants — enter the plant to extract plant nutrients (Figure 2).

Figure 2
Dagger nematode (ectoparasite) feeding from cortex cells deep inside the root of a plant.

Nematodes have a wide host range and are seldom considered a pest of just one plant species. Nematode injury may include malformed flowers, leaves, stems and roots. Some endoparasitic nematodes cause tissue abnormalities known as galls or “root knots,” which block the flow of nutrients through the plant (Figures 3 and 4). 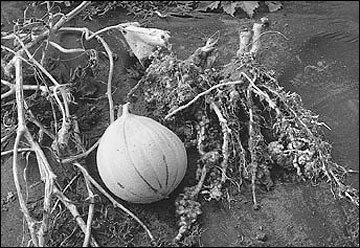 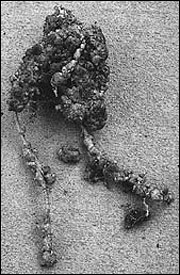 Nematode feeding sites can provide entrance for other disease organisms and increase plant damage. Nematodes are a greater problem where conditions favor nematode growth, such as long growing seasons, sandy soil and plants under stress.

Soil usually contains many free-living, or non-plant-parasitic, as well as plant-parasitic nematodes. Often, several genera of plant parasites are present in the same soil, though only one or two may cause major plant damage. When plant damage is observed, a trained person is needed to identify the nematodes present and determine if these species are capable of causing plant damage.

Root-knot nematodes are the most damaging plant-parasitic nematodes in the home garden, though other nematodes can also cause problems. Nematodes can severely restrict all the vital functions of plant roots, including the absorption and transfer of water and nutrients.

Most plant parasitic nematodes, especially root-knot, get into the garden by either infested soil or infested transplants. Infested soil is easily moved from one garden to another on equipment — not only tractors and implements but also hand tools such as shovels, hoes and rakes. Shoes or boots can carry soil that contains nematodes. Wheelbarrow and vehicle tires can also move nematodes, especially when muddy. Thousands of root-knot juveniles can be present in a tablespoon of soil. Before moving equipment and tools from a known root-knot infested garden to a noninfested one, power-wash off all traces of soil or disinfect by washing with a 10 percent bleach solution.

Harmful nematodes such as root-knot can get into a garden through the generosity of neighbors or family members who share their favorite vegetable or flower transplants. Careful inspection of the roots of transplants for root-knot galls is helpful, but often on young roots they may be too small to be seen. Usually, transplants purchased from a reputable dealer will be free of root-knot nematodes.

Another source of nematode-infested soil is improperly or partially decomposed compost. Roots infested with root-knot galls should be destroyed and not composted. The compost pile needs to be properly managed to ensure that harmful nematodes do not survive. Heat generated from decomposition and winter temperatures can kill root-knot nematode, but not always. Care should be taken when adding compost back into the garden to ensure that nematodes and other soil-borne pathogens are not reintroduced and spread throughout the garden. For more information on composting, see MU Extension publication G6956, Making and Using Compost.

A note about nematicides

Chemical nematicides are highly toxic and unsuitable for home garden use. Their use is subject to state and federal regulations, and usually only licensed pesticide applicators may purchase and apply them.

Some products have been developed from bacteria, fungi or substances produced by plants for control of nematodes in home gardens. These may be labeled as botanical, biological or organic nematicides. To date, however, results of using these products have varied widely.

Plants affected by plant-parasitic nematodes show foliar symptoms similar to those caused by inadequate moisture, poor nutrition or root rot. Affected plants may be stunted and have pale or yellow-green foliage. They may wilt readily under warm, breezy conditions even when soil moisture is adequate. Plant symptoms may range from the undetectable to plant death, depending on the susceptibility of the plant, environmental conditions and the number and species of nematodes attacking the plant. Established plants usually can withstand nematode feeding on the roots, but young plants are particularly vulnerable.

Nodules on the roots of beans and peas can be mistaken for early symptoms of root-knot nematode. Nodules are beneficial structures caused by certain bacteria that supply soil nitrogen to peas and beans. Nodules are attached to the side of roots rather than swollen parts of the roots or nematode cysts.

If nematodes are causing damage, use one or more of the following management measures:

Freezing winter temperatures in many areas of Missouri limit root-knot nematode survival. Soil freezing can be enhanced by keeping a root-knot infested garden clean of grass or other insulating debris. Winter tilling can also help facilitate the penetration of cold temperatures by turning over and loosening the soil.

Where space permits, choosing another garden site is a worthwhile consideration. However, moving the garden to a new site does not ensure complete escape from plant-parasitic nematodes. They may be present in many areas because they can survive and sometimes thrive on the roots of certain farm crops, weeds and woody plants. If the new site has a population of root-knot nematodes, continuous gardening with susceptible crops can soon increase nematode numbers to damaging levels. This may necessitate another move or other measures. Do not continue to grow nematode-susceptible plants in an area with a history of nematode problems. Check seed catalogs for resistant varieties, and adopt other management techniques to prevent nematode damage.

1 Nematode damage has been observed in these plants but does not occur as often and is not as severe as with the very susceptible plants.

2These plants grow well when root-knot nematodes are present.

Plant-parasitic nematodes often interact with other soil pathogens, causing more plant damage than either pathogen would cause alone. The interaction may render plant resistance ineffective.

The use of nematode-resistant varieties is a good management choice because it involves minimal effort and expense. However, resistant varieties are not available for all vegetable crops, and in some cases, resistance is incomplete. Incomplete resistance means that the nematode levels will build up if host plants are grown, but the number of nematodes will increase more slowly than if a susceptible plant is grown.

Lettuce, onions, radishes, leafy greens, green peas, early beans, and cabbage (and related plants) can be planted early and escape serious nematode damage. These spring-planted crops grow when temperatures are too cool for root-knot nematode reproduction and activity. The plants are harvested before nematode damage becomes serious. However, late-summer plantings of some of these crops for fall production can be severely damaged by nematodes. Nematode damage permanently retards growth and development of these plants.

Destroy roots as soon as the plants are no longer wanted or productive in the garden. Nematodes continue to feed and reproduce on root fragments in the soil and build up for the next crop, causing damage in susceptible crops. The effects of root-knot nematode damage are most evident in full-season root crops (Figures 5, 6 and 7). 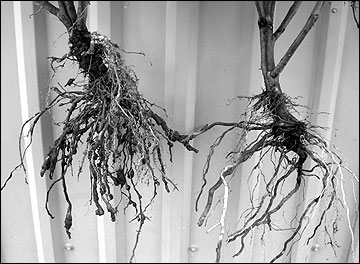 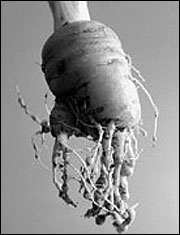 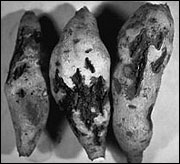 High soil organic matter helps retain moisture and adds to the available plant nutrients. Increased water and nutrients help plants fight nematode attack. Organic matter in the form of peat, manure or compost will increase the decay of organic matter, releasing nutrients through microbial action. The increased level of microbes in the soil favors the build-up of organisms that feed on all soil microbes, including nematodes. When adding compost, ensure that it does not include partially decomposed roots containing plant-parasitic nematodes or other soil-borne pathogens.

Soil-borne pathogens such as root-knot nematodes can be killed in the upper layers of the soil by soil solarization. This process traps the heat from the sun shining through clear plastic and kills the plant pathogens. Soil solarization needs to be done during the summer when air temperatures and solar radiation are high and in an area where no plants are growing. Moist soil improves efficiency of the kill. Cover the area with thin polyethylene film, and leave the film in place for at least three months. For the solarization to be effective, soil temperatures should be maintained between 98 and 126 degrees F for several months.

Keeping part of the garden fallow can also reduce the numbers of root-knot nematodes because they will not have a host on which to feed. The fallow section must be kept free of weeds to be effective. Covering the fallow section with black plastic may be helpful.

The most accurate way of diagnosing a nematode problem is a laboratory soil analysis. A good sample taken between late May and early September is essential for accurately assessing the presence of nematodes, the species involved and their relative abundance.

A good sample consists of several subsamples taken from different areas of the garden surrounding the roots of symptomatic plants. Garden soil containing roots should be randomly sampled if the area has a history of nematode infestation. Each subsample should represent the upper 7 to 8 inches of soil and an area of about 100 square feet. A hand trowel is an adequate sampling tool if the soil is soft or has been tilled recently. To collect a subsample, make a trowel-size hole 7 to 8 inches deep, and then remove a slice of soil from the side of the hole. This slice of soil is a subsample.

Collect the subsamples in a container, and mix thoroughly. From this mixture, remove about 1 pint as the sample. Promptly seal the sample in a plastic bag and submit for analysis. If shipment is delayed, keep the sample out of the sun and reasonably cool.