Most fruit crops require pollination to ensure that fruit sets. Pollination is the transfer of grains of pollen from the anthers (male floral part) to the stigma (female floral part) of a flower (Figure 1). Pollen grains get caught on the sticky surface of the stigma, germinate and produce a tube that grows down the style and unites with the female cell in the ovary. This union is called fertilization. After fertilization occurs, seeds develop and the fruit enlarges.

Honeybees are the most important natural carriers of pollen. As the bee flies from flowers on one tree to those on another in the orchard, pollen sticks to its body hairs. The bee rubs off the pollen onto the stigma and transfers additional pollen from the anthers as it visits the flowers. A honey bee may visit 5,000 flowers a day. Home plantings of fruit crops generally have enough wild bees for adequate pollination. However, in commercial orchards, beehives are generally placed in the orchard when the trees are in bloom to enhance pollination and fruit set. In some fruit crops, pollen is also transferred by the wind.

Each fruit crop, and even specific varieties within individual fruit crops, has distinct requirements for pollination. The following terms are used to describe the pollination characteristics of fruit crops. 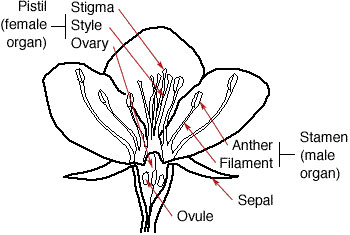 To ensure that fruit sets, the pollination requirement of the varieties of a given fruit crop should be evaluated before planting.

All varieties of apple trees should be cross-pollinated with another apple or crabapple variety. To attain the best fruit set on apple trees, the king blossom (the largest and first one to open) in the flower cluster must be pollinated. Thus, the bloom periods of the pollinizer and the king blossom of the apple tree must overlap. 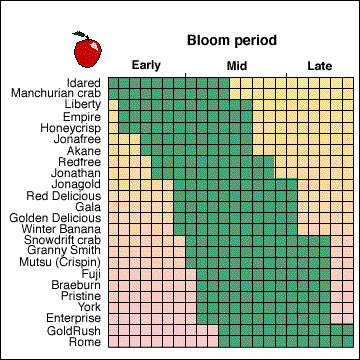 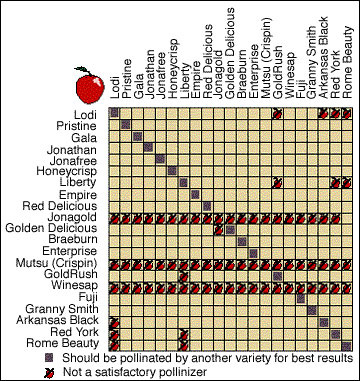 Figure 3
Apple pollination. Except where indicated, varieties listed on the left can be used as reliable pollinizers for cross-pollination.

In situations where a solitary apple tree is planted, branches of open fresh blossoms of another apple or crabapple pollinating variety can be placed in buckets of water and hung in the tree. Another way to ensure pollination where a single tree is planted, is to top-work or graft another apple variety onto the existing tree. To top-work an apple tree, 6- to 8-inch sections of branches of one apple variety are cleft-grafted onto terminal branches of another variety. 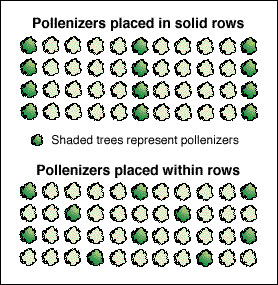 Beehives are generally placed in commercial apple orchards as the king flowers open. If hives are brought in before this time, bees may forage flowers of other broad-leaved plants instead of the apple blossoms. For this reason, dandelion flowers should be removed by mowing or by herbicide treatment before hives are placed in the orchard. In orchards where semidwarf trees are planted, one hive of a medium-strength colony (15,000 to 20,000 bees) is generally sufficient per acre. Two hives per acre are used in high- density orchards where dwarf apple trees are planted. Extra strong colonies of as many as 50,000 bees have been effective in pollinating four acres of semidwarf trees under ideal climatic conditions.

Most pear varieties are self-unfruitful. However, nearly all pears are suitable pollinizers for other varieties that bloom at the same time. One exception is Seckel, which is not a good pollinizer for Bartlett. Even though Anjou, Bartlett and Kieffer are partially self-fruitful, they should be cross-pollinated to produce heavy and regular crops. Pear flowers produce only a small amount of nectar, which is low in sugar. For this reason, more pollinizers and bees are needed for pears than for any other tree fruit.

Nearly all common varieties of apricot, peach, nectarine and sour cherry are self-fruitful (do not require cross-pollination). However, the J.H. Hale peach is not self-fruitful but can be pollinated by almost any other peach variety with a synchronous bloom period except Elberta. Self-unfruitful varieties of apricots include Perfection, Riland and Rival. These self-unfruitful varieties can be pollinized by any other apricot variety.

Stella, Lapins and Starkrimson are self-fruitful. Most other varieties of sweet cherries require cross-pollination. Several varieties are intersterile and cannot fertilize each other. For example, Bing, Lambert and Royal Ann (Napoleon) will not pollinate each other. Refer to Figure 5 and nursery catalogues for pollinizer recommendations. In commercial plantings, beehives should be placed in the orchard on the first day of bloom 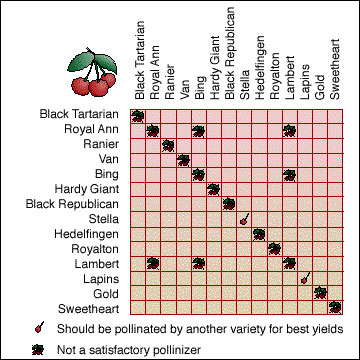 Figure 5
Cherry pollination. Except where indicated, varieties listed on the left can be used as reliable pollinizers for cross-pollination.

Most European plums (e.g., Bluefre, Blue Ribbon, Earliblue) either benefit from or require cross-pollination from another European variety. However, European or prune-type plums, such as Stanley and Damson, are self-fruitful.

Grape, strawberry, raspberry, blackberry, gooseberry and currant plants are all self-fruitful. However, blueberry varieties require cross-pollination for fruit set. Thus, varieties that bloom at a similar time should be placed within rows or planted in adjacent rows.

Poor fruit set or low yields are often caused by poor pollination or frost during the period when trees are in bloom. Some of the common reasons for pollination problems can be the lack of a suitable variety for cross-pollination. Pollination failures also occur when bloom periods of two varieties used for cross-pollination do not overlap. Poor climatic conditions during bloom can also adversely affect pollination. Bees travel shorter distances during cool (below 50 degrees Fahrenheit), rainy or windy weather. In areas where native bees have been infected with tracheal or varroa mites, growers should rent beehives from commercial beekeepers that have strong colonies. Do not spray carbaryl (Sevin) or any other insecticide that could harm bees during the bloom period. To prevent bees from foraging flowers of dandelions or other weeds, mow the orchard or control the weeds with a herbicide before the fruit plants bloom. Wait to move the beehives into the orchard until the fruit crop has started to bloom and remove the hives as flowers stop blooming.

Beehive inserts can also enhance pollination in commercial orchards. Inserts are placed at the hive entrance and filled with pollen from a pollinizer variety. Pollen can be purchased from a commercial supplier and should be kept cool and out of the sun until it is placed in an insert. Use a teaspoon of undiluted pollen every several hours. A total of 1.4 ounces (40 grams) of pollen per acre is usually recommended.