Grafting is the act of joining two plants together. The upper part of the graft (the scion) becomes the top of the plant, the lower portion (the understock) becomes the root system or part of the trunk. Although grafting usually refers to joining only two plants, it may be a combination of several. A third plant part added between two others becomes the trunk or a portion of it. This is called an interstem. Multiple grafts may produce an apple tree with several varieties or a rose-of-Sharon shrub with several different colors of flowers.

Some cultivars (varieties) of plants do not come true from seeds. Others are difficult or impossible to reproduce from cuttings or other propagation techniques. Grafting (topworking) is a way to change a large tree from an old to a new variety. It is also a method of using a root system better adapted to soil or climate than that produced naturally by a non-grafted plant. By using special understocks or interstems, grafting is a way to produce dwarf plants.

What are the limitations?

Not all plants can be grafted. Generally, only plants closely related botanically form a good graft union. Grafting is not a means of developing new varieties. The stock and scion must be compatible. Incompatible grafts may not form a union, or the union may be weak. A poor union results in plants that either grow poorly, break off or eventually die.

The compatibility of plants has been determined through many years of trial. There is no other way to determine whether or not two plants will produce a good graft union. This publication will help you make a decision about the possibility.

What can be grafted?

Most varieties of a particular fruit or flowering species are interchangeable and can be grafted. Because of differences in vigor, some are better able to support others as understocks. For example, although a union is possible, sour cherry is not a good understock for sweet cherry. Sweet cherry is more commonly grafted onto Mazzard (Prunus avium) or Mahaleb (P. mahaleb) seedlings.

Plants of the same botanical genus and species can usually be grafted even though they are a different variety. Plants with the same genus but of a different species often can be grafted. But the result may be weak or short-lived, or they may not unite at all.

Plants of different genera are less successfully grafted, although there are some cases where this is possible. For example, quince, genus Cydonia, may be used as a dwarfing rootstock for pear, genus Pyrus.

It is sometimes believed that two plants can be made into a genetically different plant by the process of grafting. However, there is no basis for this idea. Although there are cases where a different type of shoot develops from the graft union, this is the result of a chimera, a type of mutation. This is not a true intermingling of the genetic structure of two different plants as occurs in seed-produced hybrids.

When is the proper time to graft?

Most grafting is done in late winter or early spring before new growth begins. The best time is after the chance of severe cold has passed but well before hot weather arrives. Scion wood may be collected during the winter. Store it in a cold, moist place at temperatures close to 34 degrees Fahrenheit. At home, a few scions could be stored in a plastic bag in the refrigerator with moist paper towels, or they could be dipped in paraffin so they retain moisture.

What materials are needed?

What grafting technique should be used?

Grafting techniques can be divided into two basic types, which are largely determined by the size of the understock. In some cases, a graft may be made to join a scion and understock of nearly equal size. The other type attaches a small scion to a much larger understock. In this case, several scions may be attached to the understock as in cleft or bark grafting. 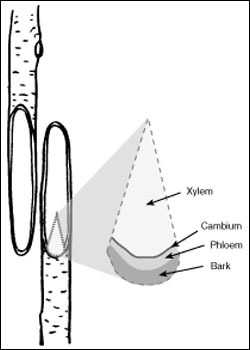 A. Cuts for the whip graft must be smooth and straight. 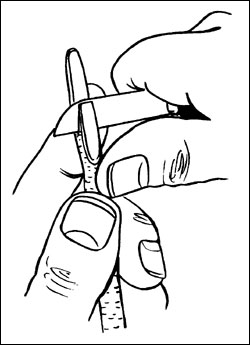 B. Cut again to form the tongue. 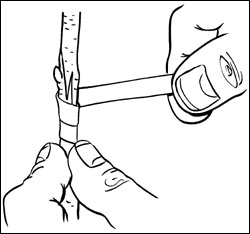 Whip graft, bench graft
The whip graft (Figure 1) is fairly easy and heals rapidly. It works best when the stock and scion are of similar diameter, preferably between 1/4 and 1/2 inch.

The stock can be either a plant growing in the field or a dormant bareroot plant as in a bench grafting. The stock should be smooth and straight-grained. Do not graft near a point where side twigs or branches have developed. 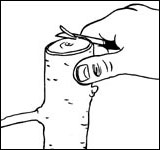 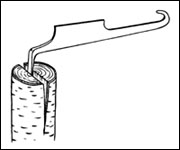 A. Cut stock smoothly. Trim any rough edges with a knife.

B. Split stock, and open with a cleft grafting tool. 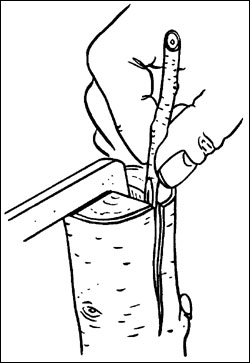 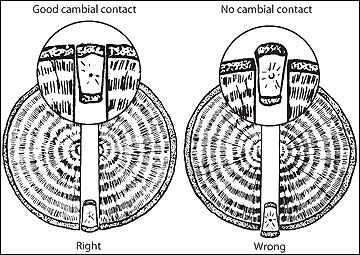 I. After the first year, shorten one scion to allow the other to develop.

The cleft graft
The cleft graft (Figure 2) is most commonly used to topwork a tree; that is, to change from one variety to another. It can be used on either young or mature trees. Young trees may be cleft grafted on the trunk, while older trees are grafted on branches not more than 2-1/2 inches in diameter. Branches fully exposed to sunlight and in the main stream of sap flow are more successful than those in shaded or inactive areas. Grafts on upright branches grow better than those on horizontal branches. 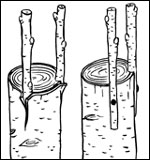 A. Stock may be prepared with a single cut, left, or a double cut.

B. Cut scion to form a shoulder.

Bark graft (veneer graft)
Bark grafting (Figure 3) is relatively easy and requires no special tools. It is similar to cleft grafting and may be performed on branches ranging from 1 inch to several inches in diameter.

A. Cut scion to form a short, smooth edge.

B. Make a slanting cut into the stock.

C. Insert scion so that cuts on thicker side match the cambium of the stock.

D. Cut off the top of the stock only after growth begins.

Side graft, stub graft
The side graft is relatively simple and is suitable for plants that are too large for a whip graft but not large enough for cleft or bark grafts (Figure 4). The plant or branch that will serve as the stock should be between 1 and 2 inches in diameter. The material for the scion should be about 1/4 inch in diameter.

Scion wood should be made of twig sections with two to three buds each. Discard the tip of scion wood and recut the base before grafting.

Timing
The best time for grafting is in the spring just as growth starts. When necessary, grafting can start several weeks before growth is expected and can continue a few weeks after growth has started, if you have dormant scion wood in storage and if weather is not exceptionally warm.

Other suggestions
The stock and scion must have cambial contact for union and growth to take place. All cut surfaces must be covered and kept covered with grafting wax until complete healing has occurred. In a few techniques, alternate methods for maintaining moisture in the union are used. But if you are grafting only a few plants, you will find waxing the graft most satisfactory.

After the graft has taken and growth has started, cut off any side shoots or competing twigs that would shade or compete with the development of the new graft. 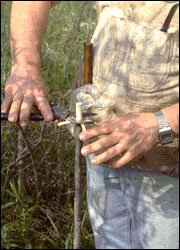 Audio clip 1.
The banana graft can be used for slightly older plants where stock and scion are about the same size. The stock is peeled as shown and the wood is cut.

Audio clip 2.
Here the wood has been removed from the stock and is ready to receive the scion, which is being prepared. 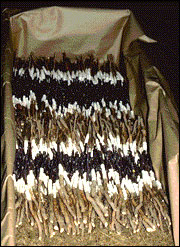 Audio clip 4.
After the stock and scion are fitted together, they are wrapped to keep the union tight and moist. After healing through the winter, they will be ready for the field by spring. 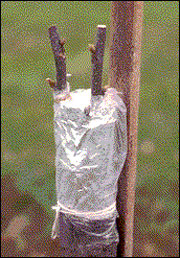 Audio clip 5.
For a cleft graft, where the stub is split, two scions are normally used.

Audio clip 6.
This scion of pecan being prepared for bark grafting will be fit on a section of the 1-1/2-inch pecan seedling rootstock that has been cleared of bark. 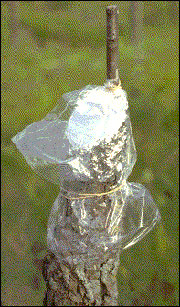 Audio clip 7.
After completing the grafting process, promptly cover the union to keep the graft cool and moist.