Although poison ivy (Toxicodendron radicans) is easily identified and should be avoided, countless people experience an uncomfortable introduction to the species. A mere touch of the foliage can result in a blotching of the skin and burning water blisters, which cause the flesh beneath to swell and itch intensely. Symptoms may become evident within a short time after exposure, or they may take a few days to appear. Usually, exposure leaves no scars, and general health is not impaired.

All parts of the plant, including stem and roots, contain and secrete a nonvolatile oil called urushiol, which affects the skin. Because the oil is insoluble in water, washing with water alone merely spreads the oil to other areas and increases the discomfort. However, washing with a strong alkali soap such as yellow laundry soap or naptha will relieve the discomfort. Alcohol will dissolve and remove the oily substance from the skin, and, if applied soon enough, will prevent irritation.

Burning poison ivy after it has been cut or grubbed out and dried can be hazardous because smoke can cause the same symptoms. Inhaling the smoke can result in serious consequences.

Poison ivy can be found as a low-growing shrub, can grow as a trailing vine along the ground, or can occur as a vine that climbs to the top of the tallest tree. Aerial rootlets enable the vine to attach itself to other plants or objects nearby. Poison ivy is a perennial with woody rhizomes, which are underground creeping roots, so control of this species can be difficult.

The leaves of poison ivy are readily identifiable and help to distinguish it from most other weed species. The leaves are compound, with three leaflets that occur alternately along the stem. Leaflets may have smooth, scalloped or irregularly toothed margins (Figure 1), but typically the lateral two leaflets have irregularly toothed outer leaf margins and smooth, untoothed inner leaf margins. The leaf surface may or may not have a waxy or oily appearance. Leaves can occur in a variety of colors on the same plant, but leaflets typically have a greenish-red cast when they first emerge in the spring, then turn dark green throughout the summer, and eventually turn red, orange or yellow in the fall.

The fruit of poison ivy is a smooth, greenish-white berry with a waxy appearance. It grows in clusters the size of small currants. Each berry contains a single seed. Birds and other wildlife feed on the berries and consequently spread poison ivy in their droppings.

Although poison ivy is relatively easy to identify, other weedy species have similar characteristics. Fragrant sumac (Rhus aromatica) with three leaflets is commonly confused with poison ivy. However, this species differs in that both fruit and leaves may be hairy.

Virginia creeper (Parthenocissus quinquefolia), also called woodbine, is found throughout Missouri. An aggressive vine, it will grow to the top of the tallest tree. It can be readily identified and distinguished from poison ivy by the five leaflets making up the compound leaf. Neither Virginia creeper nor fragrant sumac contains toxic substances that irritate the skin.

Poison ivy can be found almost anywhere. It usually grows along fence rows, in roadside areas, and at the edge of wooded tracts. However, it may also be found around the home in shrubs or flower beds and along lot boundaries. Since it is inconspicuous during the growing season, the homeowner may be unaware of its presence. However, its vivid fall color makes poison ivy a tempting addition to winter bouquets.

The names "poison ivy" and "poison oak" are often used interchangeably or to describe other related species. Poison ivy is the predominant species found throughout Missouri. Poison oak (Toxicodendron pubescens), a low-growing, nonclimbing shrub, is found in a few counties in extreme southern Missouri. Both species are irritant plants and should be treated with respect. 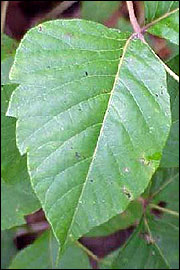 Figure 1
Easily identified by its leaves, poison ivy can appear as either a vine or a shrub. 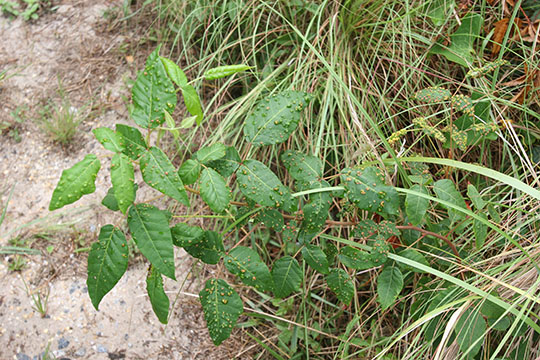 Cultural
Cultural controls such as hand-pulling, grubbing or hoeing poison ivy out of the ground are difficult but can work with small infestations. These techniques are rarely successful on infestations that have been established for two years or more. Best results will be achieved when soils are wet. Eradication will only be achieved if all portions of the underground rootstocks, the rhizomes, are removed from the soil. Avoid contact with plant parts by wearing disposable gloves and clothing that covers all bare skin.

Always read and follow directions on the pesticide label. The University of Missouri intends neither endorsement of products named here nor criticism of similar products that are not mentioned.

Chemical
Several herbicides can be used to eradicate poison ivy over time. One of the most effective active ingredients is triclopyr, a selective herbicide that kills broadleaf plants but does not harm grasses. Home and garden centers and hardware stores sell a large variety of herbicide products containing triclopyr, a common example of which is Ortho's Brush-B-Gon Poison Ivy Killer. The best tactic for selecting a product is to check the label for the active ingredient triclopyr. Another herbicide possibility for poison ivy control includes products that contain combinations of the active ingredients dicamba and 2,4-D. These two active ingredients are commonly packaged together in a variety of broadleaf lawn herbicide mixtures. Each of these active ingredients — triclopyr, dicamba and 2,4-D — is a selective herbicide that can be used safely on grasses to control or suppress broadleaf plants such as poison ivy. However, due to the potential for volatilization (when pesticide residues change to a gas or vapor after application) and off-site movement, these herbicides should not be applied in locations where other sensitive species grow near poison ivy.

Glyphosate is another active ingredient that is effective on poison ivy, but it is a nonselective herbicide, unlike triclopyr, dicamba and 2,4-D. Glyphosate is the active ingredient in Roundup herbicides, which are sold at many home and garden centers. Glyphosate can kill both grass and broadleaf plants, so care must be taken when using this product near trees, shrubs, flowers or other desirable species. High-volume solutions of glyphosate can be spot-sprayed or painted onto the foliage of poison ivy for control, avoiding contact of the solution with desirable species.

Either selective or nonselective herbicides should be applied during periods of rapid poison ivy growth to ensure maximum kill. One of the best times to apply herbicides to poison ivy is just before the plants are blooming. Although you may apply any of these herbicides at the right time and in the right amount, keep in mind that poison ivy is a tough perennial plant with thick, woody rootstocks, and therefore regrowth and new sprouts are likely to occur. If regrowth occurs, make repeat applications during the same season or in the following year to achieve complete eradication. Whenever you use any herbicide, read and understand the instructions on the herbicide label before making an application.