Grain sorghum is the sixth most valuable field crop grown in Missouri. Unfortunately, diseases damage this crop, causing lower yields and reduced grower profits. Fortunately, most diseases of grain sorghum can be managed by planting resistant varieties and adopting certain cultural practices. This publication will help you identify diseases in your grain sorghum crop and select the best disease management tactics.

Diseases are difficult to control in grain sorghum after they develop. Therefore the most inexpensive, efficient, and effective disease control procedures are preventive:

Accurate disease diagnosis is important and should always be completed before changing production practices. Contact your local MU Extension center or the MU Plant Diagnostic Clinic, http://plantclinic.missouri.edu/,  in Columbia, 573-882-3019, for help with diagnosis and current disease management information. More information is available at cafnr.missouri.edu/research/.

Every year, seed and seedling diseases of grain sorghum are common in Missouri. When severe, these diseases kill seedlings, causing low plant populations. Costly replanting may then be necessary.

Several different, normally harmless pathogens that live in the soil can attack grain sorghum seed and seedlings. The organisms most commonly involved are Fusarium, Pythium and Rhizoctonia. Infection by these fungi can be enhanced by low soil pH and cool soil temperature.

Symptoms
Healthy grain sorghum roots are white and firm, and a stand of healthy seedlings is uniform with no skips. In contrast, infected roots have dark red to black rotten areas (Figure 1). The leaves of diseased seedlings may wither or appear pale-green, and the plants may be stunted. Severely damaged plants will die, resulting in thin stands or frequent skips in rows. Surviving plants are often weak, unproductive and more susceptible to other diseases and environmental stresses. 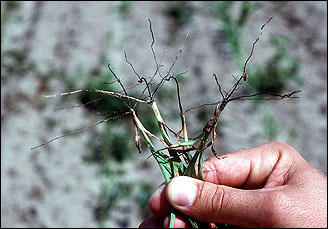 Figure 1
Black roots are an indication of seedling disease in grain sorghum.

Diseases of the leaves

Leaf diseases are common on grain sorghum in Missouri. They are caused by several organisms, both bacteria and fungi, that attack leaves in the summer and lie dormant in plant debris in the winter. Disease severity varies with the weather and the grain sorghum hybrid.

Bacterial stripe, caused by Burkholderia andropogonis, is characterized by long, narrow, red stripes, first seen on the lower leaves. The stripes range from 1/4 inch to more than 9 inches in length and tend to be confined between the leaf veins.

Bacterial streak, caused by Xanthomonas campestris pv. holcicola, is evident as narrow, yellow stripes about 0.1 inch wide and 1 to 6 inches long (Figure 2). These stripes may occur on plants any time from seedling stage to near maturity, but they are usually first apparent on lower leaves. Eventually, red-brown blotches appear in the streaks, which may broaden into oval spots with tan centers and narrow, red margins. 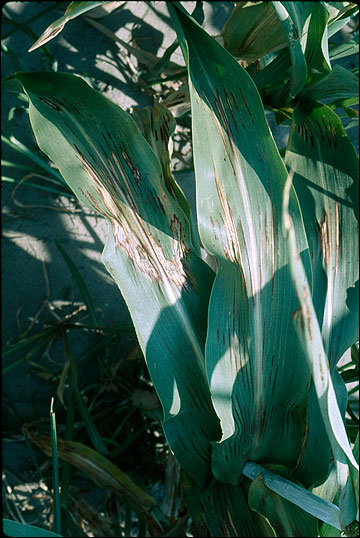 The bacteria causing these three diseases are believed to survive from one season to another in both seed and infected plant debris. They spread from plant to plant by wind-blown, splashing rain and by insects. These diseases are most severe during warm (75 to 80 degrees F), moist weather.

Leaf blight, target spot, gray leaf spot, zonate leaf spot, rough spot, sooty stripe and rust are some of the leaf diseases of grain sorghum caused by fungi (Figures 3 and 4). These diseases and the symptoms they cause are listed in Table 1. The symptoms you see in the field may vary slightly from the symptoms described here due to the weather and the hybrid. 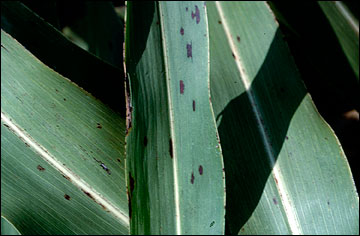 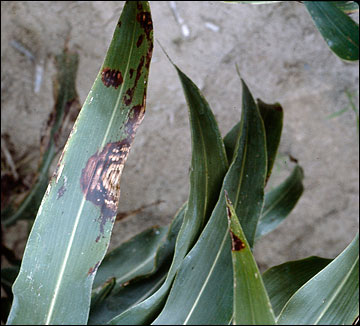 Figure 4
Target-like lesion on leaf due to zonate leaf spot.

Diseases of leaves and stems

Anthracnose, caused by Colletotrichum graminicola, can develop on both leaves and stems of susceptible plants. This disease is most serious in the very humid Gulf Coast regions of the United States, but it can be a problem in Missouri.

Symptoms
Small (0.1 to 0.25 inch), circular, red lesions with a distinct margin may appear on susceptible leaves in midsummer and cause defoliation. In severe cases, plants may die before maturation. These lesions can enlarge slightly in humid weather. Tan spots with red-purple margins may develop on upper portions of stalks. The inside of these stalks will be brick red interspersed with the normal white color of healthy tissue. Diseased stalks lodge at the point of infection, and yields may be reduced.

Sorghum downy mildew, caused by Peronosclerospora sorghi, was first reported in Missouri in the early 1970s. This disease has not become a serious problem in Missouri, but it has caused significant losses in several southern states and especially in the coastal regions.

Symptoms
Light, yellow-green streaks may develop on leaves of infected plants, and a cottonlike fungal growth will be visible on the underside of the infected leaves. Late in the season, infected leaves appear shredded as if damaged by hail. Plants may be partially or completely sterile.

Crazy top is caused by the fungus Sclerophthora macrospora. The fungus generally overwinters in grasses in ditches, and in the spring it can spread in overflow water from the ditch into the field. It can infect grain sorghum plants it contacts. This disease is generally not serious in Missouri.

Symptoms
Infected plants have thickened, puckered leaves and may tiller excessively (Figure 5). The newest leaves may roll up and twist, resembling damage caused by acetanilide herbicides such as Lasso and Dual. Infected plants usually survive but do not produce grain.

Maize dwarf mosaic virus (MDMV) has caused injury to grain sorghum in Missouri, but only in fields where johnsongrass is present. The virus overwinters in the underground rhizomes of johnsongrass. Shoots produced from these rhizomes in spring will be infected, and the virus can be moved by aphids (corn leaf aphid and greenbugs) from those shoots to other susceptible plants like grain sorghum and corn.

Symptoms
MDMV-infected plants exhibit a distinctive mottling of leaves (Figure 6). When compared with healthy leaves, diseased leaves are yellow with light green islands. These symptoms are more evident on young than old leaves. Symptoms generally are less visible on plants in the boot stage. Mottling is the most common leaf symptom, but other symptoms may occur. When temperatures fall below 55 degrees F, infected leaves may turn red, then elongated tan stripes with red margins develop on the leaves. Severely infected plants frequently die, while those that survive will be stunted and may fail to produce a normal head. 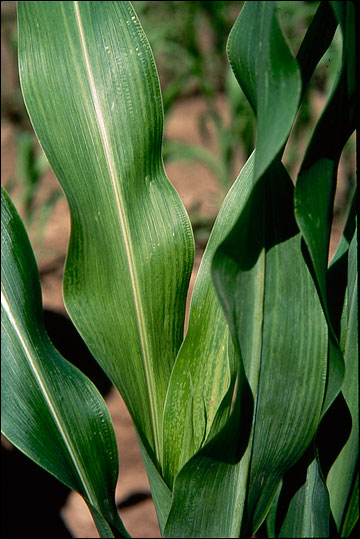 Root and stalk rots cause more damage to grain sorghum in Missouri than any other disease. Affected plants usually produce poorly and may lodge. Charcoal rot is the most common and damaging stalk rot in Missouri. However, stalk rots caused by other fungi (Fusarium, Pythium and Periconia) can be a problem.

Charcoal rot, caused by Macrophomina phaseolina, can cause seedling root rot and stalk rot in grain sorghum, but the stalk rot phase is more common in Missouri. Under field conditions, the lower stalk of an infected plant appears shredded and dark gray. This fungus decomposes the pith within the stalk, leaving only the outer shell of the stalk and the vessels. At this stage of the disease, the fungus forms small, black reproductive structures (sclerotia) on the internal parts of the stalk. These black structures give the tissues a dark gray color. The affected areas of the stalk are very weak and the plant will usually lodge (Figure 7).

Damage from this disease is generally worse in areas of a field where the plants have been under drought stress. Drought does not cause the problem, but it weakens the plants’ defenses to the disease. Charcoal rot is usually less severe if drought stress is reduced. 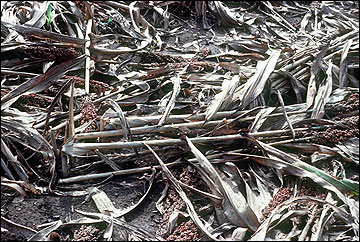 Fusarium root and stalk rot, caused by Fusarium thapsinum, can affect many grasses, including grain sorghum. The disease is generally found in the same areas where charcoal rot develops. Like charcoal rot, Fusarium stalk rot is most severe in drought-stressed plants.

Symptoms
Fusarium stalk rot causes the pith in the lower stalk to appear red while the outside of the stalk remains green (Figure 8). The pith tissue usually remains intact, unlike the shredding associated with charcoal rot. Plants may die prematurely or lodge. 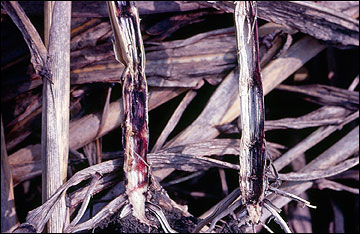 Diseases of the heads 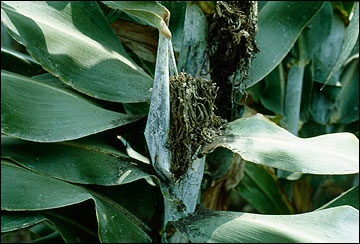 Figure 9
Deformation of grain sorghum head due to head smut.

Head molds are common in Missouri, especially when rainy weather occurs after maturity. Several different fungi grow in glumes and grain surfaces, causing the heads and seeds to appear moldy. The fungi that cause head molds (Alternaria, Curvularia and Helminthosporium) usually do not cause serious yield losses but can mold grain in storage. Certain other fungi, such as Fusarium moniliforme (Fusarium head blight) and Colletotrichum graminicola (anthracnose) can attack grain and cause considerable losses under adverse weather conditions. Prolonged wet weather that delays harvesting promotes infection of grain by these fungi and yield loss may occur. Grain quality can be affected by head molds.

Mold development related to bird damage is perhaps the most serious head problem in Missouri. Flocks of birds invade sorghum fields at various stages of maturity and cause damage to the grain. Often the birds break the developing kernels. Mold may develop on the damaged grain, causing the heads to have a blackened appearance. This damage is often mistaken for smut infections.

Several nematodes (especially stunt, root-knot and lesion nematodes) feed on and damage grain sorghum roots. No serious nematode problems on grain sorghum have been noticed in Missouri. However, nematode damage to this crop is common in other areas, especially in the south. You should be aware of the symptoms nematodes may cause and use the proper controls where appropriate.

Symptoms
Symptoms of nematode damage can be mistaken for symptoms of other problems such as nutrient deficiency, drought and root rots. Affected plants may be stunted and off-color (yellow-green) and may wilt in the midday summer sun more readily than healthy plants. Severely affected plants will not yield as well as healthy plants. Symptoms will be more apparent in sandy soils.
The only sure way to confirm a nematode problem is to take soil and root samples from the affected area and have them analyzed for nematodes. The MU Plant Nematology Laboratory, https://scndiagnostics.com/, in Columbia, 573-882-2716, can do the analysis. Contact the MU Extension center in your area about sampling techniques and forms to submit with the sample.

A variety of unfavorable environmental and nutritional conditions may cause symptoms on leaves:

Environmental conditions can sometimes cause symptoms on the leaves that can be confused with symptoms produced by bacteria and fungi. A common condition in grain sorghum in Missouri is the presence of black leaf spots without any other signs of infection. Most of this nonparasitic spotting is due to mechanical injury from insect punctures, wind whipping or wind-blown sand particles. New leaves generally will not be affected.