Research has shown that sprinkling vegetable oils on the floor and other pen surfaces in swine barns can significantly reduce airborne particulate matter (dust) concentrations. In a study recently conducted in northern Missouri, sprinkling soybean oil once a day in a swine finishing barn significantly reduced total suspended particulates (TSP) and particulate matter less than 10 microns in diameter (PM10). At an overall operational cost of about $1 per pig space (about $0.40 per finishing pig) for the basic oil sprinkling system, this technology appears to be cost-effective for swine producers.

Sources of dust, odor and gases

Dust in swine confinement buildings consists of a range of organic components, including fecal materials, feed particles, animal dander, molds, pollen and insect parts. Gases, such as ammonia, hydrogen sulfide, carbon dioxide and methane are the result of anaerobic decomposition of manure and urine. Odors are created by single gases or combinations of gases and are often transported by dust particles between 5 and 20 microns (µm) in diameter.

A high incidence of symptoms similar to chronic bronchitis has been found among workers in swine confinement buildings, and long-term measurements of air emissions from swine facilities have shown that odor, particulate matter and gas emissions may be significant, especially at large sites. Dust can also act as an irritant to the respiratory tract of animals, potentially affecting their health and growth rate.

Several factors are important to the effectiveness of vegetable oil sprinkling. Any vegetable oil free of particles and low in vegetable odor can be used (with consideration of its combustibility) if the storage quantity is large. Soybean oil is typically selected because it is commonly available. Soybean oil can be applied manually with a hand sprayer, or it can be distributed automatically to minimize labor. The study conducted in northern Missouri used soybean oil and an automatic delivery system.

The sprinkling system tested in a northern Missouri swine finishing barn reduced PM10 emissions by 62-74 percent and TSP emissions by 38 to 62 percent relative to an adjacent barn without oil sprinkling. Similar reductions in TSP emissions have been observed in previous studies using various methods of oil application.

In the Missouri study, ammonia emission rates were reduced by 19 percent, corresponding to earlier studies that showed a 30 percent reduction in ammonia using canola oil. The Missouri study showed a reduction of 40 to 43 percent in nonmethane hydrocarbons, although there are no other studies to which these results can be compared. The Missouri system, using soybean oil, had no significant effect on emissions of hydrogen sulfide (H2S). Although other studies have reported no reduction of hydrogen sulfide with oil sprinkling, studies with canola oil have shown a 27 percent reduction in H2S emissions.

How, where and when to sprinkle oil 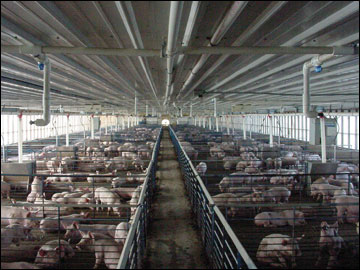 Soybean oil can be stored in a bulk storage tank either inside or outside the production building and transferred to a smaller reservoir (Figure 1) inside the building as needed. A mesh screen should be added on the inlet to protect the nozzles from foreign material that could clog them. Oil can then be pumped with a water pump and motor (1/2 hp) that is either controlled by a timer or is manually switched on and off daily. The operating pressure of the system should be maintained between 40 and 60 pounds per square inch.

A simple delivery system (Figure 2) can consist of 1-inch PVC delivery line piping attached to the ceiling of the barn. A main delivery line can be located down the center of the building with an appropriate number of smaller delivery lines branching out toward the sidewalls of the barn, in both directions, at approximately 16-foot intervals.

Each branch should be equipped with fan-spray nozzles located approximately 1.5 feet from the side of the barn and approximately 1.5 feet from the center alley (Figure 3). Depending on the length of the pens, additional or fewer nozzles may be needed to provide adequate spray coverage. For instance, one nozzle may provide adequate coverage for two pens if placed midway between the alley and the wall.

The nozzles should be located at least 10 inches from the roof and oriented to distribute the oil in a fan-shaped application area. With tunnel ventilation, the spray pattern will be somewhat skewed due to air flow. This configuration will allow each nozzle to apply oil to a pair of pens, primarily in the sleeping/laying areas of the pen. This will adsorb dust particles in these areas and allow the pigs to distribute the oil throughout the rest of the pen with their activities.

Oil application should be avoided in three distinct areas of the barn:

Avoiding pens located near the fans will help reduce the potential for oil coming into contact with the louvers and the fans. Excessive oil on these surfaces can lead to "caking" of dust and can impair fan and louver performance. Oil should not applied in areas adjacent to gas-fired heaters because this may represent a fire hazard. Oil also should not be applied to the feeders because oil application can harden the feed. This hardened feed and oil residue requires substantial effort to remove from the feeders, is unpalatable to the hogs and can create fly breeding habitat.

During the first day or two of a production cycle, soybean oil should be applied at an initial rate of about 40 milliliters per square meter per day (mL/m2-day) for a start-up phase. During the remainder of the production cycle, oil can be applied at a maintenance rate of 5 milliliters per square meter per day. Based on an approximate delivery rate of 4 liters per minute, the oil sprinkling system should be operated for about eight minutes during each start-up day, and for one minute during maintenance days. It may be beneficial to apply the oil (whether manually or set by a timer) at the end of the workday so that the application can be observed but slippery floors avoided during the typical work period.

Although not used during the study in northern Missouri, water or a surfactant or emulsifier can be added to the oil for better distribution and convenience of cleaning the barn between groups of pigs and for reducing the incidence of clogged nozzles.

In a Minnesota study, an injection pump (SHURflo 8000 model 4UN55) was fitted to an existing water sprinkling presoak system to inject oil into the water line during operation. A Dayton general-purpose solenoid was installed to activate the flow of water. The opening of the solenoid and the operation of the injection pump were controlled by a timer (Intermatic ET100C). With a system using a water/oil mixture, the distribution system can be flushed with water after the daily oil delivery to minimize nozzle clogging. In the Minnesota study, the timer controlling the injection pump and solenoid was set to operate for two minutes. An interval delay timer (Dayton, 6X604) was used to shut off the injection pump, stopping delivery of the oil after one minute, while water continued to run for another minute.

A surfactant was also used in the Minnesota study to reduce nozzle clogging. The surfactant (Alkamuls 600-DO, produced by Rhodia, Inc.) was added to the oil at a 5 percent solution rate by volume (3 gallons of surfactant per 55 gallons of oil) to enhance mixing of the oil with water. The same study also used an Aqua-Pure water filter (model AP11T) to prevent nozzles from plugging due to mineral particles in the water.

As the temperature outside the confinement building decreases, it becomes more important to maintain the temperature of the oil within the building at an appropriate level for application. The oil should either be stored indoors, or heated if stored outdoors, to improve the flow of the oil when it enters the distribution system.

The most common concern with oil sprinkling is the creation of slippery conditions on the floors, which can result in a safety hazard for production personnel during daily work activities, especially while attempting to remove pigs from the buildings. Unfortunately, this safety issue is inherent in an oil sprinkling system and can be minimized but not completely avoided. Simply stated, the oil can work to reduce dust generation only if the oil coats surfaces (including the floors) in the buildings. This means that any vegetable oil sprinkling system that is effective at reducing dust also can create a safety hazard.

Because the oil sprinkling system creates an oily coating on surfaces to adsorb dust particles, cleanup of barns can be expected to take longer (even with surfactants in waterborne systems) than cleanup of barns without sprinkling systems. On a tunnel ventilation system, fan louvers caked with oil and dust can become stuck in the closed position. Additional cleaning and maintenance are usually needed to service the louvers because of oil and dust adhering to the blades, and cleaning the barns between turns of pigs is likely to be more time consuming with an oil sprinkling system in operation. A degreaser is recommended in the power washer solution.

Based on the study conducted in Missouri, it is estimated that a sprinkling system can be installed for about $2,100 in materials in a barn that accommodates 1,100 hogs. This estimate includes the cost of pump, motor, timer, PVC piping and connections, and the nozzles, strainers and check valves. Installation of the system requires about 12 hours of labor per barn. Annual costs for operation and maintenance for an 1,100-head barn are expected to total about $1,100. Operational costs for oil sprinkling consist primarily of the oil itself, at a cost of $3 per gallon. The rate of oil use for an 1,100-head barn is about a gallon a day.

Power consumption is minimal because the system only operates for one to two minutes per day. In addition, minimal labor is needed to change the oil supply regularly and to clean and repair nozzles.

The issues of safety and cleaning time can add to the cost of the system. Although these costs are more difficult to quantify than the direct costs discussed above, they cannot be ignored when evaluating the overall cost of an oil sprinkling system.

This research was made possible by a grant from the Six-State Consortium for Animal Waste Management and was conducted in cooperation with Premium Standard Farms, Inc., the Purdue Agricultural Air Quality Laboratory (PAAQL) and Albert Heber, PAAQL Director.

This publication was printed with funds provided to MU by the Six-State Consortium for Animal Waste Management through Grant number CG004311, "Measurement and Control of Aerial Pollutant Emissions from Swine Finishing Houses."